A click away from giving up our autonomy? – A critical view on Amazon’s new Dash button

The alarm clock rings, you slowly make your way to the coffee machine since there is no other way of functioning at a time like that, but then realize you ran out of coffee yesterday. What a disaster! But thank god that we are living in 2017 where ubiquitous computing, Internet of Things and industry 4.0 have charmingly managed, that cases like these are no longer part of our everyday life struggles. The click on the Dash button, which has already been done before the coffee ran out of stock in the first place, results in a friendly postman ringing at our door to save us from our coffee-drought.

What exactly is a Dash button?

The Dash button, invented by Amazon and launched in March 2015 for the first time, is a small device that can be attached to walls, shelves or even objects like the washing machine (About Amazon – Our Innovations – Dash Button n. pag).

Dash buttons are “about the size of a pack of gum” (Amazon Dash Button, Official Site, $4.99 Credit After First Press n. pag) and cost 4,99 € of which you will be paid back with a discount of exactly this amount for your first order via the Dash button. Once it is attached onto the preferred spot, installed and connected to WiFi, the button is ready to be pushed whenever you run low on coffee, beer or after shave. In order to avoid misuse or false orders, the Dash button stops procuring supplies after it was pushed once and until the order has arrived at the customer’s door. If the button was pushed by accident or mistake, the order can be cancelled via the Amazon app – on condition that is has not been shipped yet. Additionally, notifications can be enabled in the app, so that no click by any family member will ever go unnoticed (Amazon Dash Button, Official Site, $4.99 Credit After First Press n. pag)

They have only recently been introduced in Europe and and therefore provide great material for rethinking our shopping habits. Have we really become that lazy, that picking up toilet paper in the supermarket is too much? And who controls, saves and manages all the data that is produced by these tiny objects? Such questions are important “since the Dash buttons are the latest technological retailing endeavor, and it is forecasted that numerous retailers may eventually resort to the utilization of such devices in the near future” (Farah and Ramadan 59). As you can see, questioning our consumer habits has never been more relevant.

The Dash button is only the beginning

As you saw it in the video, Amazon claims that their Dash buttons “are out of this world” (Dash Buttons by Amazon – The Future is Now – YouTube TC 0:00:02–0:00:03). They are supposed to be the beginning of the future and generate a wholly new user experience in terms of user loyalty, gratification and online-shopping experience. The vision of the so-called “Internet of Things” (short: IoT) is considered “as an area of innovation and growth” (Vermesan and Friess 1). The idea of the IoT is that technology will one day immerse into our everyday life and daily habits to such extent, that we no further recognize technology as an instrument to simplify our lifestyle (Vermesan and Friess 5).

This means that technologies such as “smart” homes, “smart” cities and “smart” interfaces will be implanted into every object, surface, architecture or device that you could imagine today (Vermesan and Friess 5). This results in “smart” fridges, “smart” (self-driving) cars and “smart” clothes for instance. Another important characteristic in this context is the “single ecosystem” (Vermesan and Friess 8) that is displayed in one shared user interface. This means, the user does no longer switch between devices or systems (e.g. iOS, Android and Microsoft) and can therefore navigate all technical devices and networks from one central hub.

The IoT, according to Vermesan and Friess, envisions a synergetic convergence of consumer, business and industrial internet (9). This is visualized by the following figure: 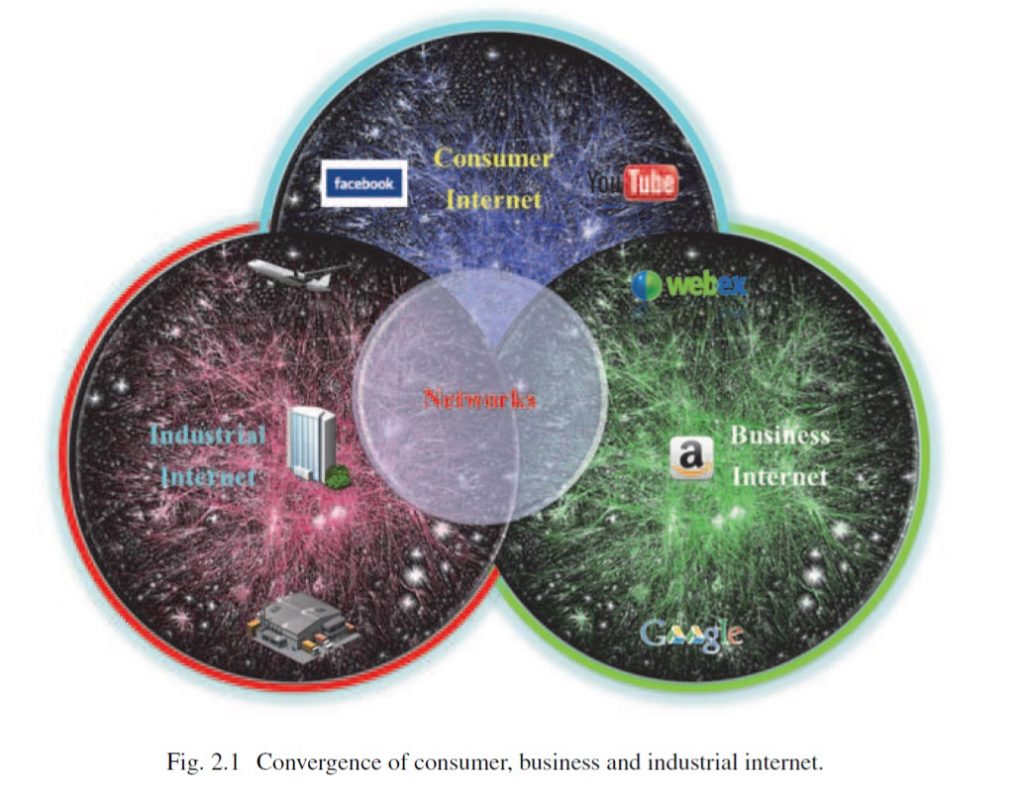 This figure shows the deep interconnectedness between future interfaces and their effect on how technology, media and internet will be consumed, altered and distributed.

If this is too farfetched for you and rather sounds like a storyboard from the latest science fiction movie, here is the relation to reality:

Our smart watch tells us how many calories we burned today, how many steps we took and how restful our last night’s sleep was. When going to the gym, we open its doors with our fingerprint. While hitting the treadmill, our wristband collects data about heart frequency, duration of workout and how much water we should drink afterwards. When arriving home and taking a shower, we realize that we are running low on shampoo and push our newest acquisition: the Amazon Dash button.

If you’re still not convinced: this is only the beginning. Imagine one day where there is no fingerprint scanner or Dash button necessary anymore, because technology will be able to scan the biometrical data of your face (which is already being used in the new iPhone X by the way), when entering the gym, or your smart fridge and shelves at home recognize when you start running short on groceries or toiletries and reorder them for you.

To show you a realistic representation of how IoT could be realized within the next couple of decades, this figure applies the prior figure’s theory (figure 1) onto real objects: 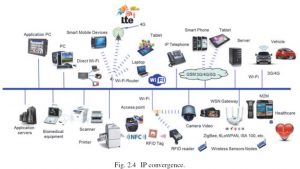 You might recognize some of the features of the future IoT I mentioned above, but might also notice that there are even more devices listed in this graph, which you have been using quite naturally before. As you can see the variety of devices shown in this figure, it also gets clearer that the IoT will stretch out its impacts into every sphere of our everyday lives, if it has not done so already. Furthermore, this figure shows that “infrastructures […] cannot be reduced to the frame or perceived by one person in their entirety” (Lisa Parks 370) meaning that although it is visible how intertwined all these devices already are or will be, yet there is a whole other universe behind the connection itself. Still, it is already now at least superficially visible or tangible for us, how much more infrastructure there is and will be when the IoT once will be realized in full scope.

So, my household will run itself? – fantastic!

Of course, this development will take a little longer than the time until the new generation of iPhones will be released, but fully connected cities, homes and technical devices are not as farfetched as you might have thought in the beginning.

But while hyping all the cool and fancy inventions companies like Amazon and Co. introduce, we often forget that there is more than clicking on a button and receiving a parcel the next day. There is amazon collecting data about our buying patterns, its repetitions and our favorite Dash buttons. Amazon, to fulfill your desire of buying a new box of coffee, therefore needs to exchange data with the company you would like to buy your coffee at. There are algorithms that we probably do not even know of, which track, encode and process our data (Geiselberger and Moorstedt 10).

Additionally, this is not only about giving away your data. Machines, in this context Amazon, are persuasive and do not wait patiently until you give them your data voluntarily. As Fogg states: “With the rise of ubiquitous computing, we’ll see a growing number of technologies that attempt to motivate and influence” (11). This means again, that the Dash button is only the beginning. First it only orders your required supplies whenever you push the button, but there will be a day when it realizes on its own that you ran out of coffee. Then it will reorder for you without your (direct) permission in terms of pushing a button or anything as such.

But before this day becomes our reality, Amazon slowly needs to make its way into our households by other means than smartphones, tablets or laptops, but by invading our electric household appliances. By getting used to Dash buttons, we give up our autonomy of deciding whether we are willing to take part in the development of a self-organized household or not. Amazon just slowly makes its way into our everyday lives and all its machines up until the point is reached, where we cannot live without the automated self-refilling fridge or the self-ordering bathroom cabinet. But just remember: “You love technology. You never run out of what you need” (Dash Buttons by Amazon – The Future is Now – YouTube TC 0:00:11–0:00:14)

Fogg, B. J. Persuasive Technology: Using Computers to Change what We Think and Do: Morgan Kaufmann Publishers, 2003. Print.