One April afternoon, I was lying on my bed and chatting with my friend on Wechat, suddenly, she asked ”Are you playing ‘Arena of Valor’ now? Look at my brilliant record!” and sent me a screenshot about her “penta kill’ of the game.

After that conversation, I did not pay much attention to that game because was doing my internship. Then, I gradually found out that people around me had begun exploring that game. My “Friends’ Circle” of WeChat was full of the screenshots shared by people from primary school students to really aged ones; and no matter where I was, waiting for the subway, shopping at mall, eating my meal or even when I was attending a wedding; I saw the bride was playing the game and asked to delay the wedding celebration or she would lose the game. 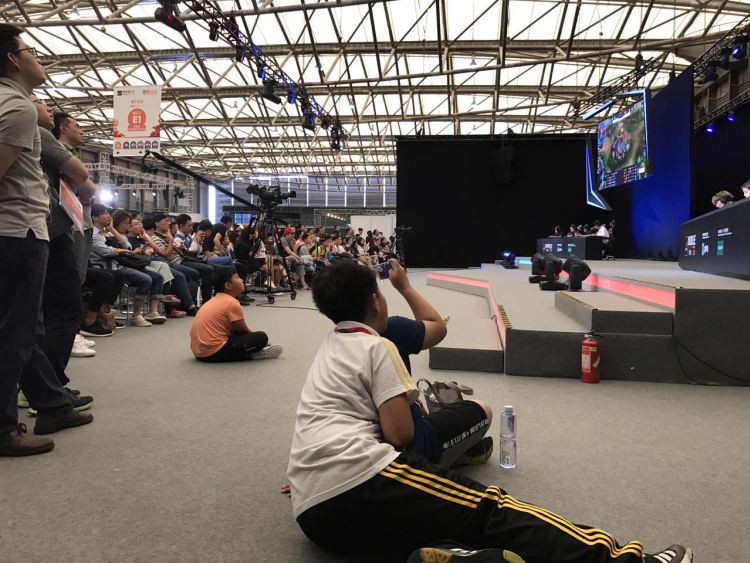 “What’s going on?” I asked myself and downloaded the game. It’s a multiplayer online battle arena published by Tencent Games. In the game, players assume the role from history with unique abilities and battle against a team of other players. The goal is usually to destroy the opposing team’s “crystal”, a structure which lies at the heart of a base protected by defensive structures.

What really surprised me was a piece of news In July 2017, it reported that the game had over 80 million daily active players and 200 million monthly active players, its income of a quarter was more than 6 billion yuan, almost 750 million euros . And It is the world’s most profitable (top grossing) game and most popular free-download app.[1] 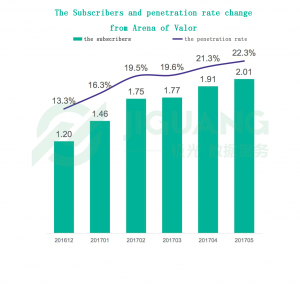 The subscribers amount and penetration rage of the market from Sept. 2016 to May.2017[2]

Why could the game attract so many people? The main reason is that the game is built on social network, and gradually become a new supplement social tool for Chinese people. The game requires either a QQ account or a WeChat account, which are both from Tencent company and occupy nearly the whole Instant Messaging network market in China, 91.8% mobile phone users download one of them till the Dec. 2016 [3]. Different from WhatsApp and Messenger, QQ and WeChat not only own the ability to chat with friends and group, they also function as Facebook. Users can upload pictures, videos with message to share their feelings, which called Q-zone and “Friends’ Circle”.

Based on WeChat and QQ’s huge user base, “Arena of Valor” can be easily obtain a large number of initial users. As time goes by, “Arena of Valor” will attract an exponential number of users. That produces ” The Effect of Sheep Flock “[4]. Under peer pressure , the individual wants to be able to integrate into the group, get the identity of the group, he would have to assume the same behavior as the group. When the people around you are playing ” Arena of Valor “, their main topic of discussion revolves around it, if you do not play and understand the game, it is difficult to join the topic of friends during the time, you will be isolated.

Primary and junior school students fear being “isolated” even more. There was a news in June of this year, happened in Quanzhou of China. An experimental primary school of Quanzhou [5], the whole classmates played “Arena of Valor”, and they punished the one child who did not.  Primary and junior school students need the feeling of belonging to a group more than adults, so when the people around them are playing this game, the topic of discussion is the game,  it is impossible to not join them. There is another reason for primary school students to easily accept the game, the roles to be assumed are based on history, like Marco Polo, the navigator; Li Bai, the great poet of the Tang Dynasty; Diao Chan, one of the four ancient beauties in history. From a cognitive point of view, familiar things are more easily accepted and understood. And the students are in a critical period of historical study, these characters are their in their textbooks and become their daily topics. For example, it was reported that a boy, while assuming the role of Li Bai in the game, recited Li Bai’s poems[6]. 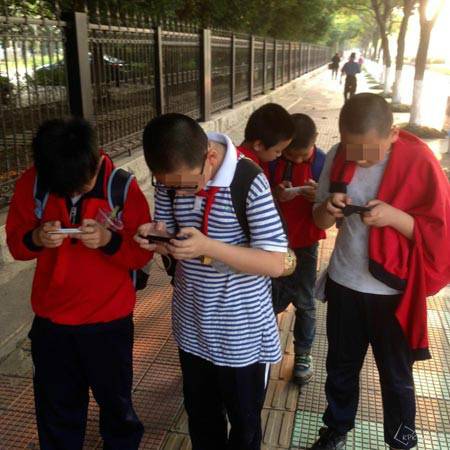 In addition, the game gives a new social choice to QQ and WeChat users. You can team with your friends in reality like your classmates, colleagues, couples, relatives to play a game instead of chatting without many common topics. The relationships in the real world can be exported to the game. Compared to playing game with strangers, having acquaintances in the team, the players will devote more and it helps the players to enjoy the experience of honor when they win and disappointed when lose. And sometimes, taking into account the overall situation, the players will sacrifice themselves to protect their team member. Players in the game do not simply assume the role, but also map the relationship of the real world. Let his girlfriend get the last drop of enemy blood to get the score, bearing the injuries from enemy for his employers, and help his parents to rank higher in the ranking list. The relationship of the game is a response of the real one ,in turn, it reinforces the real relationship.

The design of the game, every team needs 5 people, but the players can never guarantee that they have 5 members all the time, they need to play and communicate with some strangers together. If you want to win, you really need to work as a team. Besides, the game will count your KDA, kill/death/assist, to show how much you contribute to your team, compared to other social networking ways, it’s a better way to meet their competitive needs. In the course of the game the players get to know each other, get trust, become more willing to show the real oneself, from unknown to familiar, from “weak relationship” to “strong relationship”. So that the two relationship Integrated, in line with our communication social habits.

“Arena of Valor” highly resembles another game published by Tencent, League of Legends. But compared to the ” League of Legends “,the designers shorten the time to finish a battle. It may take about an hour to battle in “ League of Legends” with computer, but in “Arena of Valor”, you only need about 20 minutes with your mobile phone. Such a shorter game time, fit the timetable for modern people, they can make use of their fragmentation time like work gap, after dinner, waiting for a bus. 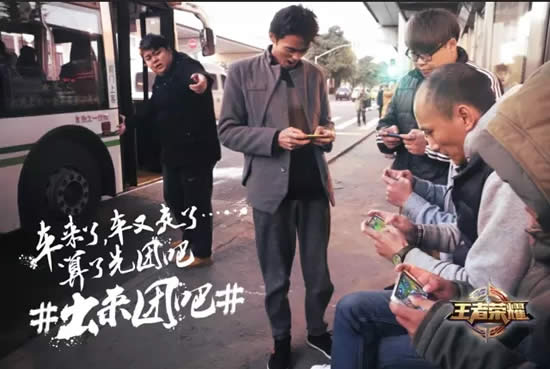 A picture from an advertisement of “Arena of Valor”, the sentence on the picture means “the bus is coming! Whatever, we should finish our game first.”

In the past, in these fragmented time, people will check their Weibo again and again, have a glance of news, give some likes and comments in Friends’ Circle, watch short videos. Their online social behavior is nothing more than commenting, giving likes and sharing experiences, the emotional involvement is far less than when they play a game together. In these short few minutes, several friends need to talk with each other to set and change their strategy according to the situation. During their cooperation, the honor and satisfaction of being a group meet not only their social need but also their self-actualization need.

“Arena of Valor” based on Tencent’s social platform, has a strong social properties. When playing the game is no longer just a search for entertainment, stimulating emotions, but can be used for social interaction as an auxiliary tool, then its meaning for people changes. This can be regarded as the main reason for the game’s success.