About 9 months ago a close friend introduced me to ”Clue”, a mobile application she claimed to have changed her life. It is a menstrual cycle tracking app that allows you to follow your periods, ovulation and other aspects related to the menstrual cycle. Since then I have been tracking myself. I am still not sure why I am doing this, except to know when my period is coming, but the information on Google play store tells me I am not one of few – the app has been downloaded 10 million times since its launch in 2013.

“Clue” sends me a few push notifications during the month – when I am estimated to ovulate, when my PMS is near and when my period is coming. Sometimes it is wrong, sometimes it is quite accurate. In order to get those notifications I have told “Clue” a lot about me: The intensity of my bleeding, my physical pain, my mood swings, my sleep patterns, my sexual activity, my energy levels, my cravings, my digestion, my cervical fluid patterns, my hair condition, my skin condition, my weight, my mental state, my motivation and my medication intake. I give “Clue” a lot of information every day (Well, I personally don’t fill it every day, but when I don’t report for about a week the app asks me kindly whether I have “something to tell”) and in return I get to know maybe a bit more about my patterns in relation to my cycle. 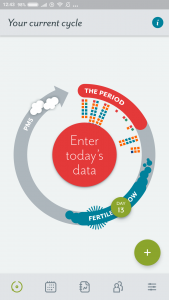 The landing page of the “Clue” app 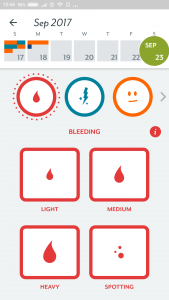 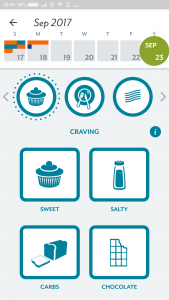 As you can see in the pictures, the landing page of the app is designed with a big circle, indicating the cycle, where you can see at what stage of it you are in, and the red circle in the middle asks you to “enter today’s data”. Pressing on that leads you to another screen where you can report about different symptoms in set categories. For example, Bleeding is divided between light, medium, heavy or spotting, Pain has the options: cramps, headache, ovulation and tender breasts. Emotions has: happy, sensitive, sad and PMS. Other main categories are Sleep, sex, energy, cravings etcetera. Each user can choose what will appear as categories through the settings of the app. After a few months of using the app, it detects certain patterns in the categories each user filled and can tell you when you might have cravings for carbs or be sad and sensitive. Personally, I find that it is accurate to some extent. There is also a lot of medical information in each category that users can choose to read if they press a small “i” signal on each screen.

Women have been tracking their periods for a long time (probably hundreds of years) before we had cell phones or even computers – with the old and reliable pen and journal system. Some do it to get pregnant, or as a contraception, but many just to follow up to be prepared for when it is “that time of the month”. “Clue” is not the only Menstrual cycle tracking app, and it was launched in 2013, about a month after “Glow”, another similar app headed by Max Levchin, the founder of PayPal and a chairman at Yelp. Another popular similar app is “Flo”. Menstrual cycle tracking apps could be defined as part of a bigger group of apps that require users to track their health or sexual habits. These apps are referred to in general as mHealth or eHealth apps, and they have attracted  reaserchers’ attention due to several unique features, one is their dependency on what is seen as the most private user data – personal health data, which, of course, brings forward the question of user privacy and commodification of user data (Ostherr et al, 2017; Lupton, 2014). They are unique in that sense because the companies providing those apps also claim that the use of personal data might benefit medical research and help individuals as much as promote the public good (Van Dijck and Poell, 2).

I am focusing on “Clue” as an example of a menstrual cycle tracking app in order to try to understand the social constructs that are portrayed in the app and the ramifications of distributing personal health data to it. “Clue” is an interesting example because unlike the other apps I’ve mentioned it is led by a woman, Ida Tin, and has a broader mission statement. Just last month the company covered U-Bahn stations in Berlin with billboards trying to promote using the word “period” instead of phrases like “that time of the month” or “strawberry week”, the campaign was also promoted on Twitter under the hashtag #justsayperiod. “Clue” also prides itself on being gender neutral, which is quite unique for a menstrual cycle app, although sometimes forces the use of uncomfortable phrases like “people who ovulate”.

In her research of sexual and reproductive self-tracking apps, Deborah Lupton comments that the apps for following sexual activity are usually directed at men, while women are offered apps to track their menstrual cycle, “As such, these apps conform to the long-established self-tracking habits of women related to their ovulation and fertility” (8).

In addition, like I already mentioned, the app is very extensive in the data that it asks the users to share. It would seem that the cycle is an all-encompassing experience that influences every aspect of a woman’s life. Although that might be true, Boka En and Mercedes Pöll argue that “it creates a reality in which a person’s menstrual cycle and mood are interlinked, and probably assumed to function in stereotypical ways” (52). In the case of “Clue”, not only moods are interlinked with the cycle but a lot of other day to day aspects. As the French philosopher Michael Foucault might put it, these apps create females (or what Clue would refer to as “people who menstruate”) as subjects of their menstrual cycle. Drawing from the app, there is hardly any sphere of life that is not determined in correlation to the stage of the cycle the user is in. Are you anxious today? oh, look at the app, perhaps you are PMSing? Do you crave chocolate? Then look at “Clue”, it might tell you that you are about to ovulate. This correlates with Foucault’s understanding of the process of the “Hysterization of women’s bodies”: a process in which the female body is “analyzed, qualified and disqualified as being thoroughly saturated with sexuality” and which is part of the attempts to “reduce all of sex to its reproductive functions, its heterosexual and adult form and its matrimonial legitimacy” (103-104).

my Clue app knows me better than I know myself

Even if “Clue” creators display it as gender neutral through the use of certain language, the interface of the app itself might indicate different things. An interface is a call to act upon, and it makes normative claims, as Mel Stanfill argues. Of course, users might choose not to interact, but it is interesting to look at what is “the path of least resistance”. What is possible on an app or site, and what features are easier or harder to use illuminates the norms of use (1061).

The fact that one of the key factors that are displayed as a default to the users of the app is their estimated ovulation shows that the creators assume a user that is interested in her fertility. It is possible to remove the ovulation time indication from the landing page, but that requires changing the default settings of the app. Flo and Glow go even further and indicate every day to the user their chance of getting pregnant. That raises a question as to why tracking your period immediately correlates with fertility tracking. There are a lot of reasons women follow their cycles besides wishing to conceive or to avoid pregnancy. All the apps also offer an option to share information on your cycle with other people, many times a partner. In that sense, new and so-called disruptive technologies can reinforce old beliefs and stereotypes. For example, that a male partner would like to monitor and track the body of his female partner and that women should take care and focus on their fertility. In her rant about trying to use two menstrual cycle apps “Clue” and “Glow”, Maggie Delano states that: [the apps] “are yet another example of technology telling queer, unpartnered, infertile, and/or women uninterested in procreating that they aren’t even women”.

The feature of sharing data with friends or partners can also be looked at from another perspective, that of trying to create a sense among users that they are not giving medical data to an ambiguous source, but rather distribute it among friends or family. That is a feature common in other self-tracking health apps as well. Researchers show that most users don’t look at the privacy terms of apps (Ostherr et al, 6). I myself did not read those terms when signing up to “Clue” or in later stages.  Recently, the app’s founder, Tin, notified users that in order to make the app profitable the information they share will be sold to third parties as anonymous aggregate user data. It could be argued that one of the ways which make it easier for users to share their personal data is by apps creating those networks of family and friends to whom individuals share data with to motivate them or make data sharing sociable. These networks of sharing create the illusion that the sharing is personal. They also seem to override the awareness of users to the other entities the data is shared with (8-9). In those terms, the option to share menstrual cycle data with people they know makes users more comfortable with sharing their most personal data with a source that can use it in ways that might not necessarily benefit them in the long run.