People use apps on a daily basis, or as Apple would say: “there is an app for that”. Apps are used for checking weather forecasts, reading the news and even finding – online – love. Nowadays, apps are even used for health purposes. Health apps are one of the latest forms of medical technologies (Lupton 610). In February 2017 the app Natural Cycles has become the first app to be officially approved for use as contraception (Manthorpe). The mobile app is approved by the Department of Health from Germany and can therefore be prescribed by doctors in Europe and the United Kingdom (Dent). The Natural Cycles app is proved ninety-nine per cent effective (Ibid.) and is more effective than the pill (England).

Along with the rise health apps such as Natural Cycles, questions regarding data collecting and privacy increase. The circulation, transformation and repurposing of digital data, personal data security and privacy are topics that requires further attention (Lupton 618).  Users are giving their information and donating personal data about their health to health apps without knowing where that information ends up (Kennedy et. al 6). Especially looking at health apps, for users it often remains unclear who benefits from their activity on health apps and the data they are generating (Van Dijck & Poell 3.). The selling of user-generated data is well known, however the potential of combining health information with other types of data is new for this era (van Dijck & Poell 9).

Natural Cycles is an emergent object to investigate, since it is the first officially approved contraception. Furthermore, the lack of transparency about the data of health apps makes the Natural Cycles relevant. It intervenes with the debate of privacy. Health apps are masking their data generating processes with the promises of helping their users – in this case preventing or planning pregnancy – and steering her users in more data generating through the features of the interface.

Who benefits from health apps

To understand how the data is generated it is important to distinguish who benefits from the health apps such as Natural Cycles. The user is the first stakeholder that benefits from the health app by being provided personalized solutions for lifestyle changes or medical issues (Van Dijck & Poell 3). Furthermore, health apps are providing options for users which are not possible or typical in traditional health environments (Cortez n.p.). For example, the Natural Cycles app is based on the rhythm method. This method works by women charting out their periods on a calendar and by doing simple math they can indicate which days they are fertile and which days they are not. Doctors would not recommend this method, since it is not reliable. However, with the development of health apps the user is given an extra option that would otherwise not be available. This means, health apps are opening doors that used to be closed.

The public good is the second stakeholder. Health apps benefit the public good by contributing to medical research (Van Dijck & Poell 3). Researchers began to notice the importance of big data for the field of medicine with the rise of mobile apps (Ostherr et al. 1). Mobile health apps are enabling the user to generate health data for the researchers, outside of controlled settings or lab-based studies (Ostherr et al. 2) Researchers claim that the user-generated health data leads to better health improvements than the data which is being collected from lab-based research (Oshterr et al. 9).  This benefits the individual user indirectly and on the long term.

How the data is generated

The health data is generated through the activity from the user. By looking into the use, interface and features of Natural Cycles, the process of generating data will be distinct. The interface of the app shows the different functions and features (figure 1). The calendar shows which days of the week are red or green, the statistics show the different stages of the cycle, the message inbox is for receiving messages from the app and the profile feature shows the personal data as well as the accomplished achievements.

The user starts with Natural Cycles by selection the option prevent pregnancy or plan pregnancy and then fills in personal information such as weight, height, date of birth and address. The app is now ready to use. In short, when the user is fertile and should use protection the app shows a red circle (figure 2). 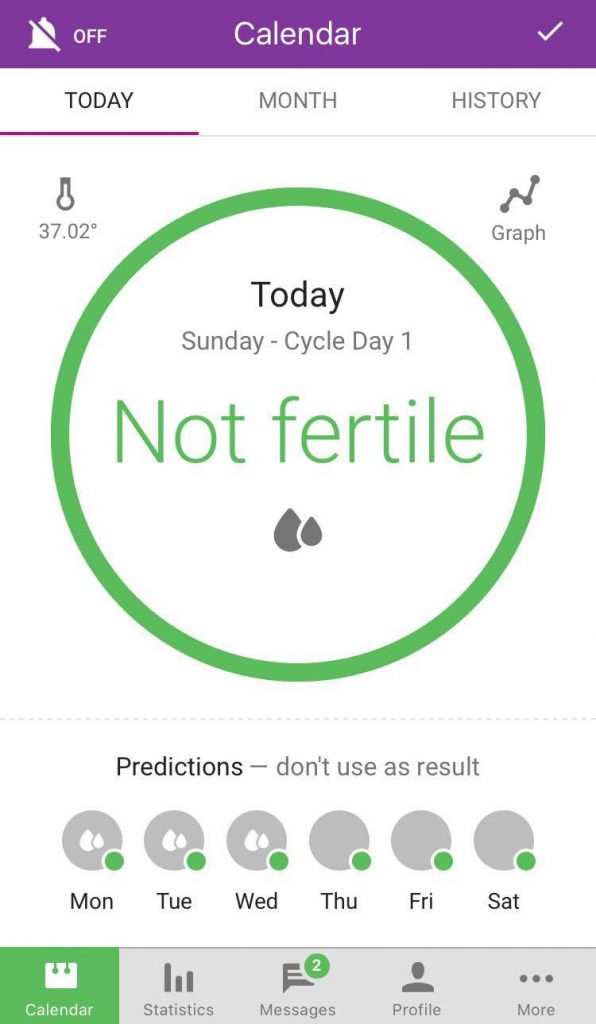 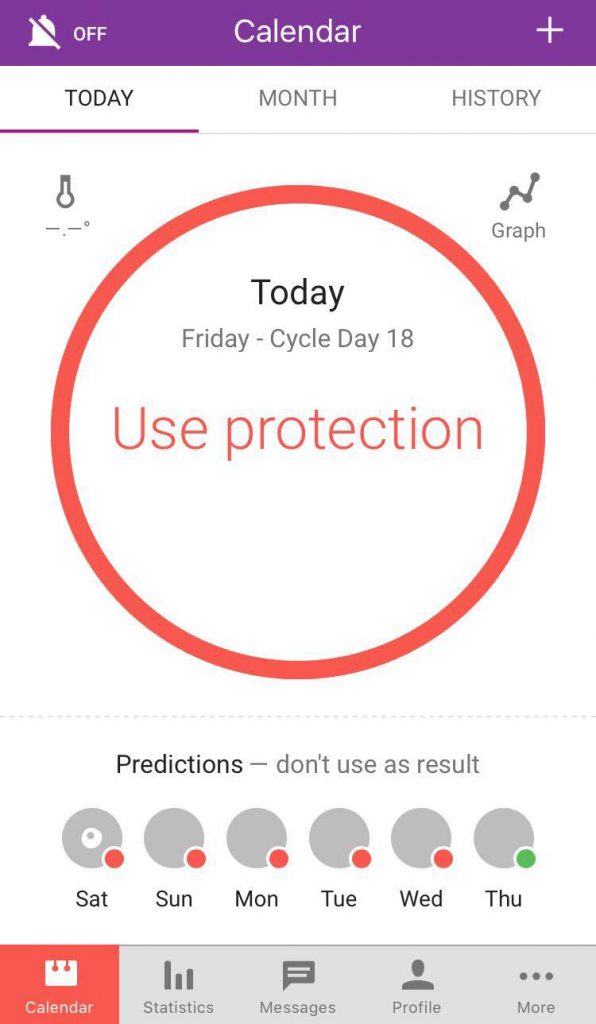 Natural Cycles is based on the earlier mentioned rhythm method. This rhythm method is combined with an algorithm created by the developers. This algorithm is personalized for every individual user, but is updated based on the data of all the users.  The user is asked to add her temperature every morning into the app. Not only does the algorithm takes the temperature of user into account, also other factors such as sperm survival, temperature fluctuations and cycle irregularities (Natural Cycles).

The app is generating more daily data than just the temperature of the user. For instance, the user is also given the questions whether she is on her period or spotting, the outcome of her ovulation test and whether she had – (un)protected – sex or not (figure3). The app also gives the opportunity for the user to synchronise Apple’s HealthKit with the Natural Cycles app (figure 4). This means more data added to Natural Cycles about alcohol intake, energy and heartrate. 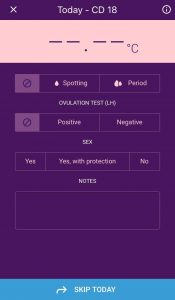 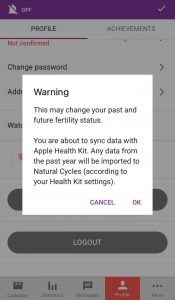 According to Natural Cycles the adding of all the extra information improves the use of the app and therefore benefits the user. What the app fails to mention is how this data is used for different purposes. The feature ‘achievements’ contributes to convincing the user to add more data to the app (figure 5 and figure 6). By fulfilling different tasks – which contains adding more data to the app – the user unlocks new achievements. With these new achievements come new statuses. By adding the achievement feature, the user is willingly to add data since there are rewards involved such as free use of the app. 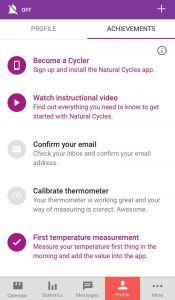 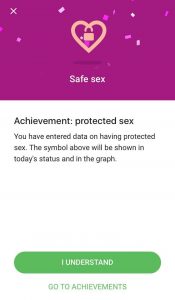 The privacy policy explains how the user-generated health data is used. The policy states that the app does not only collect the personal data, but also the data linked to the reproductive health of the user. This means, recent use of hormonal contraceptives, intercourse history and pregnancy test results. The service of the app can also request for access to phone sensors of the user, such as the sensor that counts everyday steps (Natural Cycles). Not all the user-generated health data that is being collected is valuable for the algorithm of the app. The same goes for the data being collected from the Apple Health Kit. However, the privacy policy affirms that the data from the HealthKit will not be sold with third parties (Ibid.). About the own user- generated data Natural Cycles is not willing to make the same statement. The Natural Cycles’ data can be shared with affiliates, agents and business partners (Ibid.). Who these affiliates, agents and business partners are, is not mentioned anywhere in the app or on the website of Natural Cycles.

The privacy policy goes on by stating that the personal data may be transferred and processes in other countries (Ibid.). These other countries can be outside the EEA. The EEA is the European Economic Area. This EEA provides safety measurements for data transferring. According to the website of the European Commission “special precautions need to be taken when data is transferred to countries outside the EEA that do not provide EU-standard data protection”. This means, the data of Natural Cycles’ users are not secured at all times. Furthermore, the privacy policy states that they may transfer personal data in the event that the business (or part of it) is sold. By registering for an account or using the services, the user consents to all the privacy policies.

The app Natural Cycles is the first official approved contraception app which gives women the opportunity to plan or prevent their pregnancy without depending on condoms or hormone related anticonception. The features and functions of the app allow and even encourage the user to add more data than necessary – for example, if the user is having unprotected sex or not. The feature ‘achievement’ is even rewarding the user for adding more data. However, looking closely at the privacy policy of the app, the safety of the users’ data is not secured. Moreover, the user-generated health data is used and shared with – to the user unknown – partners and affiliates. This means, if an insurance company is partnering with Natural Cycles the company gets access to the data of the user. If the data is providing the insurance with certain information that is not beneficial for the user, it can cost the user money or even losing their insurance. The privacy policy of the app is also stating that the selling of the business including the data of the user is possible. Altogether, the privacy policy of Natural Cycles is making it distinct that the user has no rights over the user-generated health data and – whether this is immediately or in the future – that this data will be sold. The Natural Cycles app shows how it is important for app users to stay observant regarding privacy policies of health apps, accepting the terms and agreements and their behaviour of creating and sharing data.

Natural Cycles. “How it works”. 15-09-2017. https://www.naturalcycles.com/en/contraception/howitworks>