Shitposting: an analysis of its practices and meanings


Sometimes, when friends comment on my affection for shitposting, I jokingly refer to my Facebook page as “a curation of the finest avant-garde memes”. This overtly pompous and purposefully pedantic way of describing content obviously undeserving of it is not, though, just a random thought. Though usually not intentionally, these shitposts frequently carry characteristics of works of modern and post-modern art: self-referentiality, irony, appropriation of symbols of pop-culture, deconstructivism. It might seem quite silly to analyse content with no serious aspiration through that lens, but even seemingly innocuous content can carry and frequently does carry ideology, be it political or not, underneath its trivial facade. And in fact, many of the techniques identified in the creating of shitposts can be linked to movements that pursued the absurd as a way of expressing very serious ideas.

Before we begin, we must, of course, define what a shitpost is. The top definitions for “shitpost” and “shit posting” on Urban Dictionary read as follows: “To make utterly worthless and inane posts on an internet message board.“ and “The constant posting of mildly amusing but usually unfunny memes, videos or other pictures that are completely random or unrelated to any discussions.” While not completely precise, these definitions offer some valuable insight into the characteristics of a shitpost: a lacking (apparently) of meaning, lowbrow humour and, in some cases, repetition. I would like to point, however, another one of the definitions: “An ironic art form of expressive yet apathetic funposting […]”. In many cases, upon a closer inspection, shitposts prove themselves not worthless or senseless at all, instead providing commentary on social media itself.

The apparent lack of humour in shitposts can actually be linked to a certain comedic tradition: namely, anti-humour. Anti-humour is not, as the name might suggest, the opposite of humour. We could call it, instead, “meta-humour”. In

“The World as Will and Representation”, Schopenhauer attempts to explain the origin of humour: “The cause of laughter in every case is simply the sudden perception of the incongruity between a concept and the real objects which have been thought through it in some relation, and laughter itself is just the expression of this incongruity.” (99) In other words, rumour comes from our expectation of something and a break from said expectation. Now take a look at the following post on Twitter: 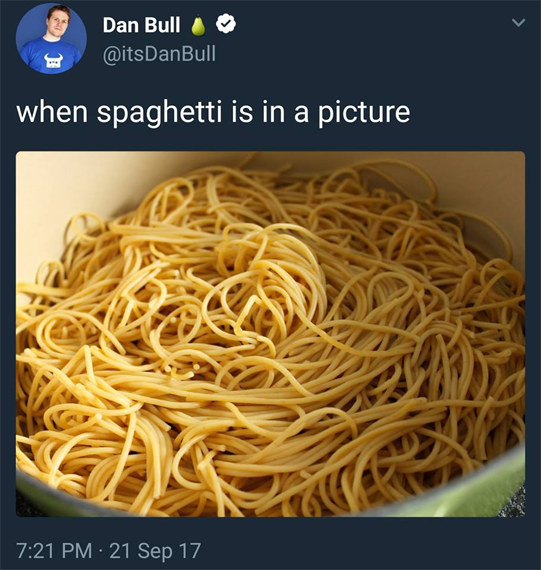 The phrase “when something” followed by an image is a well known memetic template. It sets up the expectation of something humorous, which does not happen. This rupture with the traditional structure of the joke creates the incongruity posed by Schopenhauer, paradoxically becoming funny by not being funny at all. You can find humour in the same vein in the work of experimental comedian (sorry, “song and dance man”) Andy Kaufman, who was known for playing practical jokes on the audiences themselves, such as spending an entire stand up show reading from The Great Gatsby.

Metalanguage is, in fact, a very common aspect of shitposting, not only in content but in form. Often, it is used to either satirise or provide commentary on memes themselves, be it on specific templates or broader trends. This concept could be linked with the situationist use of “détournement”, the practice of using capitalist mass media symbols to criticise it. “The mutual interference of two worlds of feeling, or the juxtaposition of two independent expressions, supersedes the original elements and produces a synthetic organization of greater efficacy.” (Debord, 1) This idea can be exemplified with this meme. The simulation of heavy jpeg compression. The combination of filter to achieve this effect is a nod to the degradation that often accompanies the very act of sharing over the internet. Improper practices, specifically, screenshotting instead of saving, can lead to the image being compressed again with each upload, leading to an overall loss of quality and the enhancement of digital artifacts that would normally be barely visible. This degradation, in turn, further signifies the juvenile humour, as it were, itself a product of oversharing. This is consistent with the use of Minions. Their exaggerated, childish behavior gave them immense popularity, leading to their oversaturation both in mass and social media. In the latter, they were often used in content that was not just plain unfunny, but that had absolutely no contextual connection to them. Of course, I’m in no way going to suggest that the audience makes this analysis when they see such an image. But they don’t need to, due to the efficient synthesis they can understand this is a riff on Minion memes. 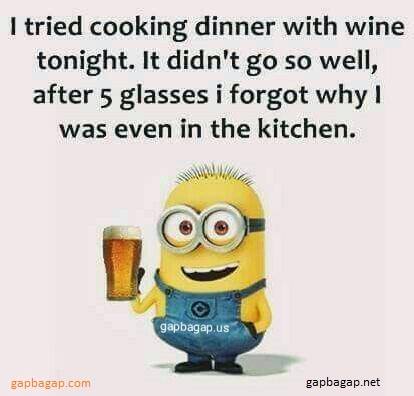 This frequently involves what could be compared to the dadaist technique of collage. They adapted the technique used by the cubists to aggregate objects from everyday life, forming “a chaotic visual diary of modern life” (National Gallery of Art). In a similar vein, they aggregate memes, common expressions, popular shows and generally well known imagery to produce a disjointed, almost dream-like picture of the internet landscape. They have at the same time a sense of familiarity and aliennes, produced by the presentation of known content in an exotic form. 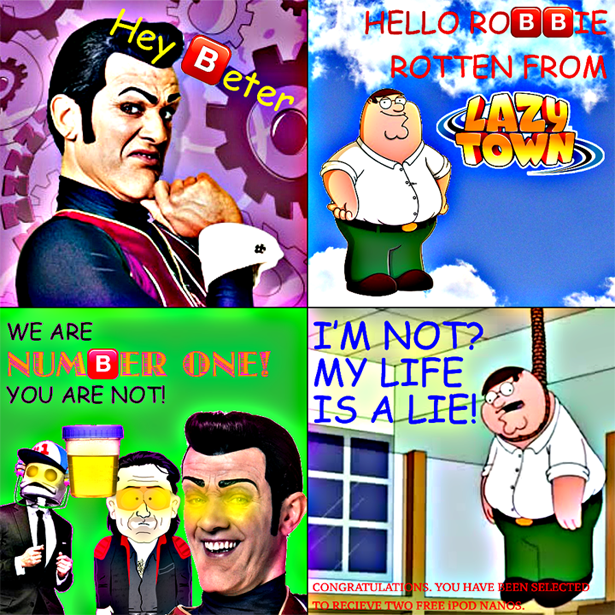 In fact, this form of collage has been taken to an extreme with a page called Shitpostbot 5000, which randomly selects and mixes templates and images provided by users and uploads them to Facebook. The complete surrendering of the process to a random-like alghorithm brings forward the images that populate the collective unconsciousness, in a similar fashion to the newspaper poems proposed Tristan Tzara in his “Dada Manifesto on Feeble and Bitter Love” (1920). The difference is the total renunciation of the author to automartion and the collectiveness. I believe that, were he alive today, he would certainly appreciate the idea.

It’s interest to note the proximity of some of the artistic movements mentioned to political activity. Dada and situationism are as much political as artistic movement, intending to, through art, combat bourgeois values and capitalist society. (Ball, 66; Debord, 1957). And, interestingly enough, shitposting is actually used a lot by both far-right and far-left groups. This is, of course, probably not news to anyone, since the use of Pepe the Frog as a symbol by pro-Trump groups went well reported last year, having even been mentioned by Hillary Clinton during her campaign. Reportedly, the use of memes is a way to make extreme discourse acceptable. While there aren’t studies on the effectiveness of this practice, we do know that there’s at least one right-wing “group” (not an organised group of people, but an amorphous mass of users claiming the name around many instances of social media) based around the production of memes: the so called “Kekistan”, whose flag can be seen in pictures of the Charlottesvile protest. 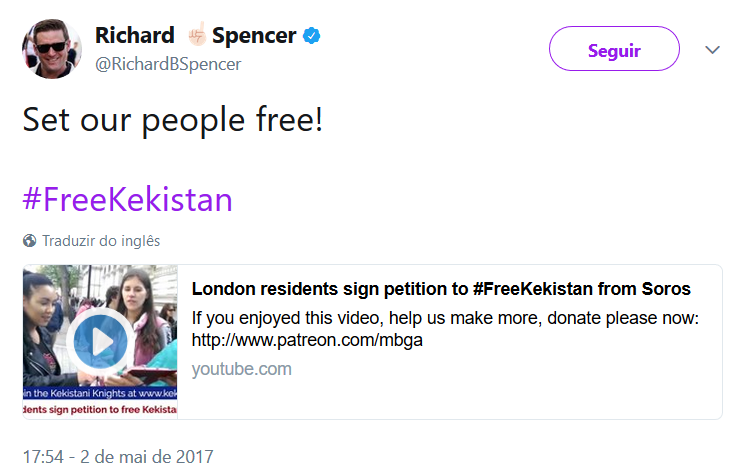 “Most extreme Islamist propaganda found on the Web does not directly advocate violence or seek recruits for carrying out specific terrorist operations. Rather, most is aimed at bolstering the ideological base of Islamism.” (Waller, 285) The same notion can be verified in far-right shitposting. In imageboards, subreddits and Facebook groups, feelings of isolation and discontentment are redirected, both by blaming minority groups and by the normalisation of extreme right-wing discourse and imagery in what is seen as place of acceptance. Similarly, most memes will not call for violence or push for policies. They will maintain an aura of good fun, while bringing forward a certain set of ideals. 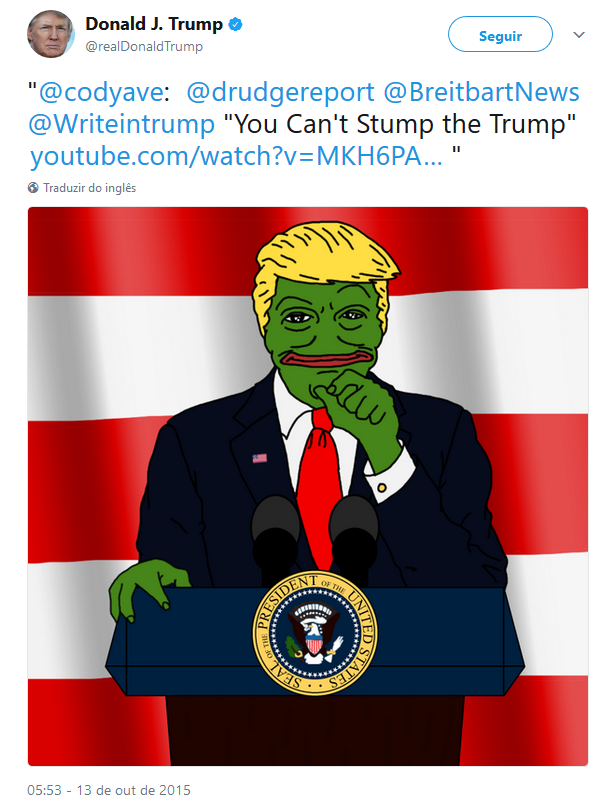 It is not hard to see why shitposting can be an effective form of shifting the window of acceptable discourse. A lack of clear meaning, the muffling of the difference between sincerity and irony and the repetition are, combined, efficient ways of normalising discourse. After all, it doesn’t look serious. It doesn’t look like it’s really saying something. It’s just shitposting. There we can see what, exactly, is the importance of a deeper analysis of meme culture, especially when straying from the mainstream, since niche communities, being more tight-knit, offer a much more fertile ground for the propagation of less accepted ideas. It must be noted, though, that in no moment I propose that internet culture, memes or shitposting are solely responsible for the processes mentioned. They are, of course, just an expression of far more complex relationships and ongoing transformations in current society. Still, they are just as important to attentively analyse as any other cultural product.

Debord, Guy. Report on the Construction of Situations and on the International Situationist Tendencies Conditions of Organization and Action. Bureau of Public Secrets, 2006, www.bopsecrets.org/SI/report.htm. Accessed 23 September 2017.