The Kakao Empire: The South Korean Example of a Digitalized Lifestyle

Kakao talk is a gateway to the World of Kakao (Source)

In South Korea, you can do everything with Kakao. You can send an ice cream cake to your friends, get updates about new mobile games, manage a bank account, call a taxi and much, much more. Although it may sound very sweet, we are not talking about chocolate here, we are talking about a communication empire.

KakaoTalk was a mere instant messaging application when it made its début in the Apple App Store in March 2010. In less than a year, KakaoTalk had 10 million users. In 2017, it has gathered up more than 42 million users in Korea which is 97% of the entire smartphone user population. (OhYujin, 2017)

As the number of users explosively increased, it expanded its service to a broader range; Gifting (mobile gift certificates, in the form of a barcode message for real products (KimSang & KimHeeJin, 2012)), Plus Friend (a B2C communication channel), and Kakao Story (a social network service) were added to the app.

Starting from 2011, as it has announced its vision to evolve into a conclusive lifestyle platform, KakaoTalk has launched countless additions: Kakao Game Center, Kakao Hair salon, Kakao Taxi, Kakao Stock, Kakao Music and Kakao Navigation. All gained huge, immediate success, the Game Center, for example, was used by more than 12 mio. players just in a matter of two months.

Very recently, they even have launched a bank of their own. Through Kakao bank, you can manage your finance in all fully digitalized manner and connected to Kakao Pay, it offers a great deal of convenience that has attracted over 3 mio. account holders only 1 month after its launch in this August. The whole banking industry has been shaken up during last few months by this giant making yet another big step. Korea is laying upon this giant’s palm and the KakaoTalk has no intentions to stop the rise.

Why Kakao Matters More Than Whatsapp

KakaoTalk’s emergence and its dominance in Korean society entail numerous important implications to our understanding of the era of New Media.

Firstly, KakaoTalk’s evolution to a lifestyle platform shows how a whole society can be digitally-oriented. Even though it has been a very popular contemporary topic (e.g. for fictional literature and films, such as Netflix Original Series Black Mirror, Elan Mastai’s fantasy novel All Our Wrong Todays, True Names by Vernor Vinge etc.) with rather extreme predictions, either dystopian or utopian, there has been no actual preceding example of human life almost entirely managed digitally. South Korea is close to reaching that state and KakaoTalk as a lifestyle platform has played a major role in this development. Fortune or misfortune, we now have an opportunity to observe what a fully digitally oriented life will bring to human existence.

Secondly, KakaoTalk’s dominance over Korean society is unprecedented matter in a human history. 97% of smartphone users in Korea are using KakaoTalk and its dominance is indeed largely affecting Korea’s politics, economics, and public well-being. (JungHeeSeog, 2012) KakaoTalk is not only a passive factor that influences people’s unconscious decisions in their life, but also an active player that shapes the general idea of privacy policy in the industry, shakes up the stock market prices, and changes the opinion about the political debate. Social dominance of a digital platform has been an issue since the emergence of Facebook but an extreme case like KakaoTalk with a very concrete setting (South Korea) will show a clearer example for us to think about what the upsides and pitfalls are and how we can prepare for it.

Lastly, KakaoTalk’s evolution in Korea suggests how the Asian (or even global) social media scene will be changing in the future. Despite its failure in Korea, LINE, launched by Korean digital media giant NHN group (the prominence of its search engine and web portal Naver surpasses that of Google in South Korea), is an unmatchable IM application in Japan and South East Asia. What is noteworthy here is that LINE has been following the exact path that KakaoTalk has been taking in South Korea – Line established as an extensive lifestyle platform that has a remarkable resemblance to KakaoTalk. (ParkSooHwang, KimTaeJoong, NamYoonSung, 2016) 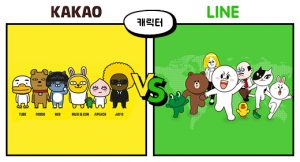 For instance, KakaoTalk and LINE both have their own mascot character business that is called respectively, Kakao Friends and LINE Friends. But not only the names and characters, also the overall business models including design tactics and distribution methods are almost identical. (LeeSeonYoung & LeeSeungJin, 2016) There are many other examples of LINE ‘copying’ Kakao’s services or business model. KakaoTalk has never openly accused LINE of ‘copying’ but East Asian new media academia is now curious if LINE can reproduce KakaoTalk’s legendary dominance all over Asian continent and whether similar success stories are possible globally. (JungHeeSeog, 2012)

Academic Debate on What Made the Emperor an Emperor

Since KakaoTalk offers such a one-of-a-kind example, also scholars couldn’t help but notice the emergence of the new media giant. Especially how a single application can achieve such continuing dominance in the market is a hot topic in Asian New Media academia. Most of the publications mention the following factors:

However, in the end, the academia is supporting two different theories when it comes to what made KakaoTalk ‘talk’ to people; ANT and User usability.

ANT (Actor-Network Theory) perceives a technology or a service as an active actor and by observing the interaction between the technology in interest and other surrounding actors, it enables in-depth analysis on the development of the technology. There are series of researches that attributes KakaoTalk’s success to its well-developed actor network. In other words, Kakao’s success is not seen as achieved due to its own excellence in service of technology, but from an organic interaction with varied social actors, including users, service partners, telecommunication cooperation, and government. (LeeSungHo & KimJinWoo, 2016) For example, Lee and Kim’s research in 2016 brings focus to the concept of co-creation to the discussion on how KakaoTalk could build a loyal and extensive relationship with the users and secure a constant supply of new contents..

On the other hand, there are scholars that put more weight on the excellence in user usability of the application in the discussion of what made KakaoTalk so successful. Graphic design researcher Chung has asserted in her recent publication Kakaotalk is more successful than WhatsApp in Korean because of its usability is surpassing that of WhatsApp. Using ‘Think aloud’ method and Heuristic evaluation, Chung says KakaoTalk holds its preeminence in Efficiency, Forgiveness, Predictability, User control, and Visibility. (ChungHaeKyung, 2015)

Ups and Downsides of the Monopoly: Privacy Tyrant Alert

KakaoTalk had remarkable influences on the Korean society, politics, and individuals. While it can be positively mentioned that it led to increased convenience in everyday life from organizing and nurturing social relationships to shopping and banking, there are also certain pitfalls. Especially its usage of cloud computing and exploiting manner of collecting personal information has been igniting a big debate on how KakaoTalk is handling the user privacy issue.

In fact, in 2014, there was a national wakeup call. Jung Jin-woo, deputy leader of South Korea’s Labor Party, has openly accused that the prosecution went through Jung’s private communications on KakaoTalk. KakaoTalk CEO Lee Sir Goo finally admitted to having compiled to turn over Jung’s chat records to prosecutor which clearly violates Jung’s rights under South Korea’s Personal Information Protection Act. Despite a prompt public apology from the CEO, this caused a national outrage and the question: what else does KakaoTalk do with private data? (Watch related news coverage from Arirang News below; https://youtu.be/we3cBkvtLIM)

What is very disturbing about this incident is not only that Korea’s most popular IM application and the government might have an ominous relationship but also that KakaoTalk didn’t have to feel legal or economic consequences. 2 million users temporarily left KakaoTalk but the loss was restored in no time. (텔레그램, 카카오톡 대안 될까?[Can Telegram replace Kakaotalk?], 2014) The dominance of KakaoTalk is creating tremendous network externality in the Korean society which makes it hard to live in Korea without it. In fact, Min and Kim’s case study on Facebook and KakaoTalk using Privacy Calculus Model shows that the effect of network externality is two times bigger for KakaoTalk than Facebook and the effect of concern in privacy to a willingness to continue using the social media is two times lower for KakaoTalk.  (MinJinyoung & KimByoungsoo, 2013)

Concluding, it can be stated that academics, as well as individuals, agree that KakaoTalk is blessing and curse alike. As an excellent example of a new media company with an interactive business strategy and great usability, it certainly enrichens the Korean society to an extent that is far beyond what WhatsApp does in other countries. However, it’s power is also far bigger. In connection with the phenomena of new media, KakaoTalk should hence be examined more thoroughly. With the power that the Korean communication emperor gained within the last years, unprecedented possibilities arise. South Korea could be one of the first examples of a country mainly ruled and organized by a new media conglomerate rather than politics.

JungHeeSeog. (2012). The Evolution of Korean Social Network Service focusing on the Case of Kakao Talk. “Journal of Digital Convergence”, 147-154.