Have No Fear…Facebook is here? 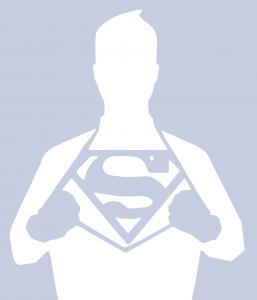 Since its February 2004 debut, Facebook has evolved from an online yearbook for Harvard students into a daily ritual for 1.32 billion daily active users as a resource for everything from status updates to the latest world news to birthday reminders and now for crisis management (Facebook).  The latest August 2017 Facebook update included a permanent Safety Check hub on both desktop and mobile versions of the platform which includes safety check-ins for world crises like natural disasters and acts of terrorism, news on recent or current disasters, fundraising opportunities and a forum to find or give other non-monetary aid. 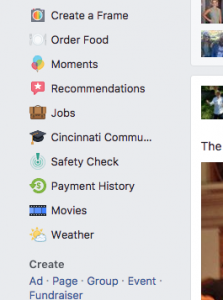 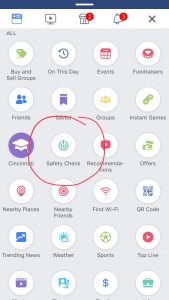 The Safety Check feature has existed since 2014 as an as-needed feature automatically activated during a natural disaster for those determined to be in the affected region. Facebook uses the activated “Nearby Friends” feature as well as internet tower locations to determine users in potential danger (Chowdhry). In June of 2016, Facebook announced that the feature would be community activated based on an influx of posts in certain geographic regions and confirmed by a third-party source. Facebook’s social good team product lead said to TechCrunch reporter Dickey :

“This is a really exciting time because not only is the community specifically themselves activating it, but also the ones promoting it and spreading it. They’re the ones making the decision of ‘this is when safety check will be useful and I want to ask my friends,’ and it’s no longer Facebook sending the notification.”

In February 2017, the Community Help feature was added which allows people to “find help or provide for those in need following a natural disaster or other catastrophe” (NG). Users can offer shelter to those displaced, ask for a ride to a hospital or any other non-monetary forms of aid. Monetary aid was added in June 2017 when Facebook allowed fundraisers within the Community Help pages.

Until August 2017, the safety check feature was only accessible to those in affected areas at the time of crisis and the Community Help and Fundraiser pages were housed in different places around the site.. The latest update makes all of the Safety Check features a permanent crisis response hub for all users no matter his or her personal safety status or proximity to the issue.

The new hub can be found on the desktop version by clicking “see more” under explore on the left side of the home page and on the mobile version by clicking the bottom right button from any page to open the features menu.  The Safety Check button can be found nestled among buttons reading “instant games”, “order food”, “weather” and “on this day”, integrating itself into Facebook’s interface. The hub includes a variety of crisis response features for the affected and the not affected. It allows user to view friends’ activity, showing a list of recent crises and which friends in the area have or have not marked themselves safe. Names of crises can be selected, opening a page with recent news on the crisis, fundraising opportunities, a forum to find or give help and a list of which Facebook friends in the area have or have not marked themselves safe. 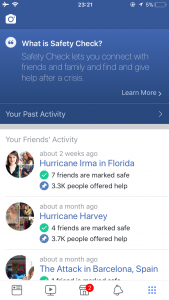 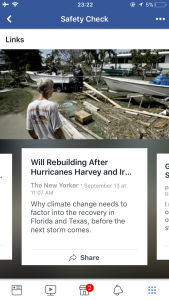 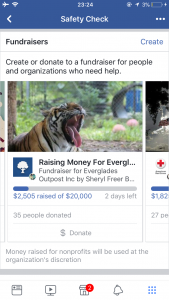 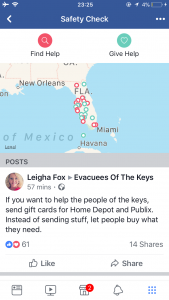 The top of the hub reads “Safety Check lets you connect with friends and family and find and give help after a crisis”. The tagline closely aligns with Facebook’s new mission statement, “give people the power to build community and bring the world closer together”, justifying the existence of the page. CEO Zuckerberg stated, “For the past decade, Facebook has focused on connecting friends and families. With that foundation, our next focus will be developing the social infrastructure for community–for supporting us, for keeping us safe, for informing us, for civic engagements and for inclusion for all”. The statement and revisioning comes after a challenging year in which Facebook was criticized for a feed designing peddling misinformation about the U.S. Election and several terrorist attacks in 2016 (Dow Jones Institutional News). In an effort to connect the community, a number of privacy concerns have been raised.

I have several friends who live in Florida, one of the many places affected by Hurricane Irma. I woke up on September 13 with a Facebook notification on my phone reading, “Holly² and 3 other friends have marked themselves safe”. I clicked the notification and was provided a list of name of Facebook friends in possibly affected areas. Four names were designated “marked safe” and six other friends were said to be in the areas but “not yet marked safe”. Facebook prompted me to either “Ask if Safe” or “Mark Safe” for these unmarked friends. I did not even know that 4/6 of the named people were even in Florida at the time.

In addition to Facebook sharing your location with your friends, this raises other potential concerns. Of course, you have to opt in to participate by checking in and letting your followers know you are safe. But the nature of it makes it so you are socially and architecturally encouraged or nudged to because if you don’t facebook shows your friends that you have not been marked safe. Thayler and Sunstein define a nudge as “any aspect of the choice architecture that alters people’s behavior in a predictable way without forbidding any options or significantly changing their economic incentives” (8). A push-notification asking you to tell your friends you are safe is a nudge within the Facebook architecture.

By creating this hub, Facebook is responding to a universal dependence on social media where people turn to social networks during 911 situations rather than the typical channels. In the pre-Facebook era, people used to turn to news channels and newspapers for information, but now, often even these channels are looking to social media. “Often the front lines of information come from eyewitnesses who are reporting on recent events. In many cases, even traditional mass media sources such as major news outlets glean information from these sources prior to breaking news” (Lachlan et al). Understanding that users turn to it for news, Facebook has created a hub aggregating crisis information.

BUT WHO IS IT FOR?

The feature used to only be available to those in the designated crisis regions, but is now available to all people at all times. Facebook argues that the feature was created in alignment with its mission to bring people together, but when it is available not just to those who need it, but to everyone, who is it really for? A phenomenon popularized by the increase in globalization and media called disaster porn is defined as “media coverage of disasters which seeks to satisfy the pleasure that viewers take in seeing other people’s misfortunes, as by constantly repeating vision of an event, often without commentary or context” often signified by too much coverage or too much accessibility to other’s misfortunes (Recuber). A simple click on the Safety Hub button opens pictures of flooded homes, terrified terrorist attack survivors, and pleas from victims asking for help. Disaster porn is often characterized as repetitive the watching of other’s misery from a position of comfort. With the features accessibility to not only those who need it to communicate their own safety or to check the safety of others, but to those who are just “trolling” or internet browsing, critics question its powers of disaster speciation and desensitization effects.

However, a quick browse of the hub makes it clear that lives are being changed and saved. The fundraisers have raised thousands of dollars and the Community Help page has connected people with food and shelter during Hurricane Irma and Maria, the Manchester attacks and other disasters. . Based on the success of crowdfunding sites like GoFundMe, Fundly and Booster, it is no wonder why Facebook got involved. Every day hundreds donate to fundraising pages or offer help on the Community Page. Doing so allows the user offering aid to share it to their Facebook timeline. This is an example of what Stanfill describes as the productive power approach or “The structuring ideals that position particular behavior as ‘correct’ or ‘normal’ matter, as the social valuation attached to the norm makes compliance with normativity a compelling option” (Stanfil 1060). Which means, in this context, that donating, offering aid or even checking in as safe has added social value on Facebook because of the notifications dispersed and the ability to literally “like” when someone does good.

Facebook is changing the infrastructure of crisis response by nudging its users to mark themselves safe on Facebook as soon as possible when found in a crisis situation and nudging others to donate and help via the social network site. This raises a question that theorist Morozov proposed: “if Facebook isn’t watching, will we still do the right thing? (Morozov 14). 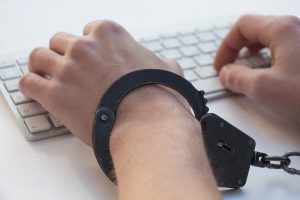 Chowdhry, Amit. “Facebook ‘Safety Check’ Tells Your Friends That You Are Safe During A Disaster In The Area.” Forbes, Forbes Magazine, 16 Oct. 2014, www.forbes.com/sites/amitchowdhry/2014/10/16/facebook-launches-disaster-notification-feature-safety-check/#3d8e495863f8. Accessed 24 Sept. 2017.

Morozov, Evgeny. To save everything, click here: technology, solutionism, and the urge to fix problems that dont exist. London, Penguin Books, 2014.