Publicism: Breaking the chains of press censorship and surveillance

The 2017 World Press Freedom Index, published by Reporters without Border (RSF), shows that media freedom is increasingly threatened not only in authoritarian regimes but also in democratic countries. For example, the Netherlands (5th) has dropped three places in this year’s index. New Zealand (13th) has fallen eight. Croatia (74th) has fallen eleven.

Below is a visual overview of the level of press freedom worldwide since 2013. The colour categories are assigned as follows: good (white), fairly good (yellow), problematic (orange), bad (red) and very bad (black). 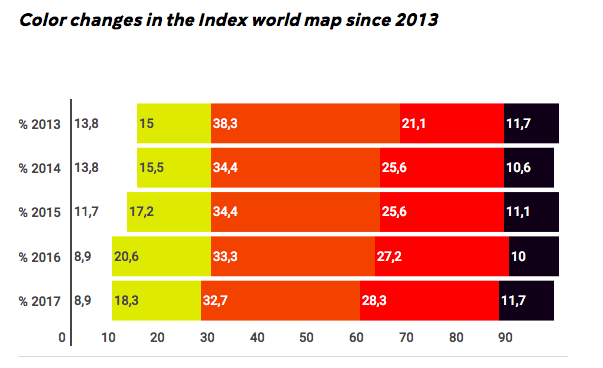 As shown in Graph 1, respect for media freedom has declined over the years. More strikingly, according to RSF (2017), the scale and the nature of the violation against media actors has escalated due to:
– legislation that allows surveillance on journalists and news organisations
– anti-media rhetoric and other political pressure
– financial pressure and loss of funding
This alarming erosion of media freedom urges a revolution to break the chains of press censorship and surveillance.

PUBLICISM – A PLATFORM SAFE FROM CENSORSHIP AND SURVEILLANCE

Concerned and passionate about press freedom, Dutch startup Publicism is developing a platform in which citizens and journalists can store and publish their content without fear of repercussion. Publicism makes use of blockchain technology to allow for a fully decentralized network that is technically impossible to hack, shut down, or censor (Publicism, 2016). 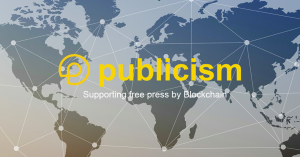 Publicism (2016) explains, “a blockchain is a distributed database. The structure makes it possible to create a digital ledger of transactions, that is shared among a network of computers, without the need for one central server or authority” (p. 3). Blockchain is argued to be an emergent technology which has the capacity to disrupt the traditional business models and even the current “big disrupters”, e.g. banks, Uber, Airbnb, by cutting out the middleman who charges the service fee for coordinating transactions (Tapscott & Tapscott, 2016).

This video explains briefly the motivation of building Publicism and how the technology works.

Blockchain’s most famous application currently is Bitcoin and cryptocurrency. Less known to the public are: self-executing contracts which set and ensure fulfillment of contract terms automatically; the Enigma system (developed by the MIT-team) which encrypts data and allows sharing them without revealing the actual data to any third party nor the computations running it; Zcash which offers transactions while hiding the content of transactions (including the sender, recipient, and value of transaction) (Publicism, 2016).

Publicism is working with some international research teams to integrate these solutions and other technologies, such as the software TOR (The Onion Router), which conceals its users’ IP addresses and their online activities from surveillance and traffic analysis. The desired result is a platform in which journalists can publish their articles, collaborate with each other, and receive fair payment for their work, all in anonymity or safe pseudonymity (Publicism, 2016).

Anonymity is stated to be the prime focus of Publicism since they believe safety for journalists is fundamental to free press (Publicism, 2016). Indeed, anonymity is crucial to protect journalists in countries where governments persecute and imprison journalists for publishing content deemed questionable by the government.

However, one could question to what extent readers trust the content posted by an anonymous author. Would it be possible to hold journalists accountable for what they write when their real identities are hidden? These are practical questions in the specific context of Publicism. The answers could be found when exploring the issue of anonymity in the academic debate. Since anonymity is an issue with broad applications, implications and impact on society, I would limit my discussion to anonymity used by journalists and its impact on digital journalism.

First of all, what is anonymity? And what is pseudonymity?

Professor Nissenbaum (1999) contributes one of the most important understandings of anonymity as “the possibility of acting or participating while remaining out of reach, remaining unreachable”, and emphasizes that “this unreachability is precisely what is at stake in anonymity” (p. 142). This concept of anonymity implies the genuine value of anonymity, the desired effect of remaining unnamed.

Pseudonymity is slightly different from anonymity. Pseudonymity means one writing under a consistent, but disguised, name. Since the purpose of anonymity and pseudonymity is to hide the real identity of authors, I will address both terms as “anonymity” for the rest of this post.

Anonymity, is it good or bad?

It is perhaps oversimplifying the anonymity issue by questioning whether it is good or bad. Instead, one should examine arguments in favor or against anonymity to understand its dilemma.

Scholars have discussed rationales which support the use of (full or partially) anonymity. The list is long but here I just highlight the arguments that I find relevant to the digital journalism context:

Those who investigate and write about public issues such as corruption, law violations, politics, human rights and other abuses may find it indispensable to represent themselves with pseudonyms.

Professional and citizen journalists in repressed countries are most vulnerable to surveillance, persecution and violence. Within six months from February to August 2015, four Bangladeshi bloggers were brutally murdered following their criticism on religious extremism (CPJ, 2015).

Such killing and other kinds of harassment could be prevented if the authors’ real identities are hidden. Thus, Endalkachew Chala, a leading blogger in Ethiopia, remarked “encryption is a lifeblood for freedom of expression” (cited in CPJ, 2015, p. 9). Chala’s reflection supports the importance of a platform like Publicism in which encryption is the core and and makes it resistant to malicious actors.

2. To contract for privacy (Froomkin 1999)
This is perhaps the most prominent justification for namelessness in the digital age. Powerful digital conglomerates such as Google, Facebook, Apple, and Microsoft are collecting our data and online activities at just about every turn of our lives through various techniques (Tapscott & Tapscott, 2016). Sometimes they even require real identifications that may undermine users’ privacy and the autonomy of the individuals.

Laurie Penny, a contributing editor of the New Statesman magazine, was banned from Facebook for using a pseudonym (Khomami, 2015).

Most people, including journalists, lack the knowledge and skills to keep their personal information private in the computerized world. Even remaining unnamed or using pseudonyms is no longer sufficient because small bits of information about us can be used to trace back to our identities, and the dimensions of our identities are endless (Nissenbaum, 1999).

This is perhaps why a platform like Publicism is necessary to shield the identity of journalists from all the tracking and surveillance systems.

Famous examples of pseudonymous and anonymous published opinions can be found among distinguished political leaders such as Alexander Hamilton, James Madison, John Jay, John Dickinson, and many others (Schleyer, 1978).

The influence of new found America’s political leaders may have contributed to the establishment of anonymity as a way to encourage press freedom as guaranteed by the First Amendment in the US Constitution (Weicher 2006).

4. To enhance the quality of speech and debate (Froomkin,1999)
An anonymous writing would give no hint of the writer’s background, i.e. age, sex, race, and nationality; thus, relieving the writer of prejudice and stereotyping, and also encouraging discussions that solely concentrate on the merits of the content (Froomkin, 1999).

Anonymity also facilitates the participation in public discourse of those who might have otherwise been subject to hostile and biased comments, and that in turn improves the quality of the debate by having more diverse perspectives.

Anonymity vs Trust and Accountability

Having mentioned why anonymity is used and is necessary in digital journalism, we should not neglect its potential negative implications and consequences. The most popular and relevant rationales are: anonymity could be misused as cloak for underlying self-interest (Froomkin, 1999); it undermines the credibility of an article and the accountability in journalism (Marx, 1999; Weicher 2006)

While anonymity encourages audience to focus on the content rather than the writer’s background and motivation, it may also allow writers to bring propaganda into public discussion and make it difficult for readers to perceive the bias or self interest underlying a writing (Froomkin, 1999).

This potential effect, however, could be prevented by a productive and impartial vetting system. Unfortunately, Publicism does not mention the review process in any of their publications. In my email exchange with the Publicism team, they said that they are in the final stage of finishing their prototype. Therefore, we could expect to learn more about their review regulations and process in the near future.

On the other hand, a similar project called DNN (Decentralize News Network) explained in great detail about their community-based review system because “the review process is one of the most important aspects of the platform” (Singh & Taylor, 2017, p. 31). They even make sure that reviewers are unaware of each other’s identity in order to prevent reviewer collusion (Singh & Taylor, 2017). The DNN’s review process is argued to help eliminate blatantly false or biased coverage, and therefore guarantee the credibility of articles being published.

A genuine anonymity implies both the positive value in protecting journalists as well as the risk inherent in allowing individuals to write without any traceability.

Genuine anonymity by journalists is, as of this writing, not technically possible on traditional print media, online newspapers and magazines, social networks, and blogging. It is also not ethically encouraged for the sake of accountability and credibility of journalism. According to Marshall McLuhan (1964), “the medium is the message”. Such an encrypted platform like Publicism would sends a message that “genuine anonymity should be allowed and supported for the sake of press freedom”.

Schleyer, R. J. (1978). Right to anonymity in jeopardy: An analysis of the history of debate surrounding governmental subpoenas of the press. (Thesis). Available from Theses, Dissertations, Professional Papers. Paper 5224.