Knockout or next round? All eyes towards the battle between Uber and London’s transport regulation system ‘TfL’. Employee conditions and security affairs are the big issues in this public discussion. Is there a bright new future for digital labor or is it the latest update of exploiting capitalism? Who will win the fight?

In an official statement, London’s official transportation regulator ’Transport for London’ announced that they declined Uber’s request of proceeding their transport licence.

TfL declared that Uber’s shortage of corporate responsibility for public security is one of the main issues. Therefore, Uber’s users are not allowed to use this service anymore. So far, Uber is granted to operate until the licence runs out at September 30.

Until now, Tom Elvidge said in a statement the decision affects more than 3.5 million people in London who use the Uber application. Furthermore, 40,000 licensed drivers would lose their job. He attacked the decision by claiming that London shows adverse reactions towards innovation. To defend its biggest market, Uber intend to appeal  to a court.

”     3.5 million Londoners who use our app, and more than 40,000 licensed drivers who rely on Uber to make a living, will be astounded by this decision.

By wanting to ban our app from the capital Transport for London and the Mayor have caved in to a small number of people who want to restrict consumer choice. If this decision stands, it will put more than 40,000 licensed drivers out of work and deprive Londoners of a convenient and affordable form of transport.

To defend the livelihoods of all those drivers, and the consumer choice of millions of Londoners who use our app, we intend to immediately challenge this in the courts.

Drivers who use Uber are licensed by Transport for London and have been through the same enhanced DBS background checks as black cab drivers. Our pioneering technology has gone further to enhance safety with every trip tracked and recorded by GPS. We have always followed TfL rules on reporting serious incidents and have a dedicated team who work closely with the Metropolitan Police. As we have already told TfL, an independent review has found that ‘greyball’ has never been used or considered in the UK for the purposes cited by TfL.

Uber operates in more than 600 cities around the world, including more than 40 towns and cities here in the UK. This ban would show the world that, far from being open, London is closed to innovative companies who bring choice to consumers.”

Londons mayor Sadiq Khan reacted to this statement by saying that innovation and new technology are an important part of London; Nevertheless, every part needs to fulfil its duty and follow the laws. Safety and security have first priority and thats why he supports the TfL’s decision.

”     I want London to be at the forefront of innovation and new technology and to be a natural home for exciting new companies that help Londoners by providing a better and more affordable service.

However, all companies in London must play by the rules and adhere to the high standards we expect – particularly when it comes to the safety of customers.

Providing an innovative service must not be at the expense of customer safety and security.

I fully support TfL’s decision – it would be wrong if TfL continued to license Uber if there is any way that this could pose a threat to Londoners’ safety and security.

Any operator of private hire services in London needs to play by the rules.”

The Uber community is shocked by the regulations of the TfL. Anxiety and fear spread among the 40.000 London-based drivers who use Uber for living. Uber is permitted to keep operate as usual in the city, connecting customers and drivers through their widespread application. Uber’s driver are considered self-employed contractors which means they do not receive the unemployment benefits.

On the other side, Uber is not known for treating their contractors fair. The critics claim that Uber failed to solve issues like sexual assault by passengers or drivers. In the past, several cities, like Austin or Philadelphia tried to prohibit Uber from operating in their area, in the end, the prohibition was temporary. Still, Londons regulators seem to be more serious about this topic and the result could be different.

This tweet ultimately shows what kind of impact the Uberization has on society. Furthermore, it demonstrates the technological evolution. 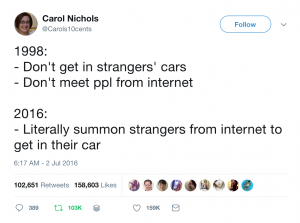 The question is how long will this appeal process last? Months, or even years? This spectacular situation helps neither the public or drivers.

The new trial of regulation could end in a disaster out of Uber’s perspective. London is the biggest market and consequently important to the Uber community.

Uber is currently valued at $ 70 billion and provides online platforms in more than seventy countries. Besides the revenue, Uber affects modern business models and transport systems by challenging regulators. Uber’s responsibility is to continue the political and public debate. Uber provides an efficient and affordable service which threatens established transportation systems and it’s operators. The fact that Uber offered its platform since 2012 in London makes Tfl’s decision a big deal. The ’shared economy’ drivers of Uber were able to undercut the fares of its competitors, in this case the black cap drivers of London. Furthermore, the online platform offered its service to the existing taxis but they rejected. In addition, several protests were organised by the black cabs during the recent years with no success of stopping Uber’s growth. The ongoing discussion between Uber and political regulators does not seem do have an end.  Uber obviusly asks for forgiveness instead of permission. The coopoeration  obtained the ‘status as a market disruptive innovator’ because of its huge rise and the debate about ’shared economy’ and ‘platform capitalism’.  (Dudley,Banister, and Schwanen, 2017), (Christensen, 2010)

Uber is by far one of the best examples when it comes to the phenomena of ’shared economy’. The online platform allows its user to offer and purchase items and services among each other. (Cannon & Lawrence 2014)

In this Economy, platforms support the sharing of items and services among people. Individuals are separated into two groups: consumers and (micro)entrepreneurs. (Micro)entrepreneurs provide or sell these services or assets and consumers buy or share them. In this particular case, Uber connects drivers and customers trough their application. (Dillahunt & Malone, 2015)

The Term ‘Uberisation’ is derived from the name of the company, Uber. It is “associated with platform intermediation for services in the transportation and hospitality industry based on dynamic pricing models.” (Radu & Psaila 2017). More corporation examples in the field of ’shared economy’ are Airbnb, GameFly, and Fashionhire. These business models shape the governance of work, especially work regulations and the relationship between employer and employee. The digital age takes a huge part in disrupting the labor market by reducing the negation power of labor unions in the digital economy. The fact that it is difficult to connect drivers to a certified union is another coefficient of the business model. The impact on global economy is past dispute. In addition affirmative side effects contain demand overage and efficient use of resources. Besides this positive effects the digital labor still hunger for more security and stability like every other employee. Uber sees itself as a platform and its users  rather as independent drivers and contractors than employees. Which implies that the drivers do not gain the usual employee benefits. It depends on the regulators and their authority. In Tokyo, Uber operates as a travel agent. To consider another part in this debate, in between the years 2013 and 2015 Uber spent about $ 1 million on lobbyists; that is two times the amount which Facebook and Apple spent. The conflict between Uber and regulators exhausts a lot of resources and manpower on both sides. Uber critics claim that the background checks are one of the mayor issues. Currently the method of selection the drivers does not require fingerprints which could give criminals access to the job position. Several situations appeared where passengers experienced physical attacks and harms. Uber offers minimal protection to their riders which opens up room for regulation and discussion. (Radu & Psaila, 2017)

In this debate, Pasquale argues that global platforms rather reduce the stability of employment instead of supporting fair labor. Uber may offer a good service to riders and drivers but there is no warranty for the future. It dramatically changed the urban transportation system while avoiding labor law and other typical market regulation factors. Pasquale presents the counter-narratives to ruling approaches to the term ‘platform capitalism’. (Pasquale, 2016) 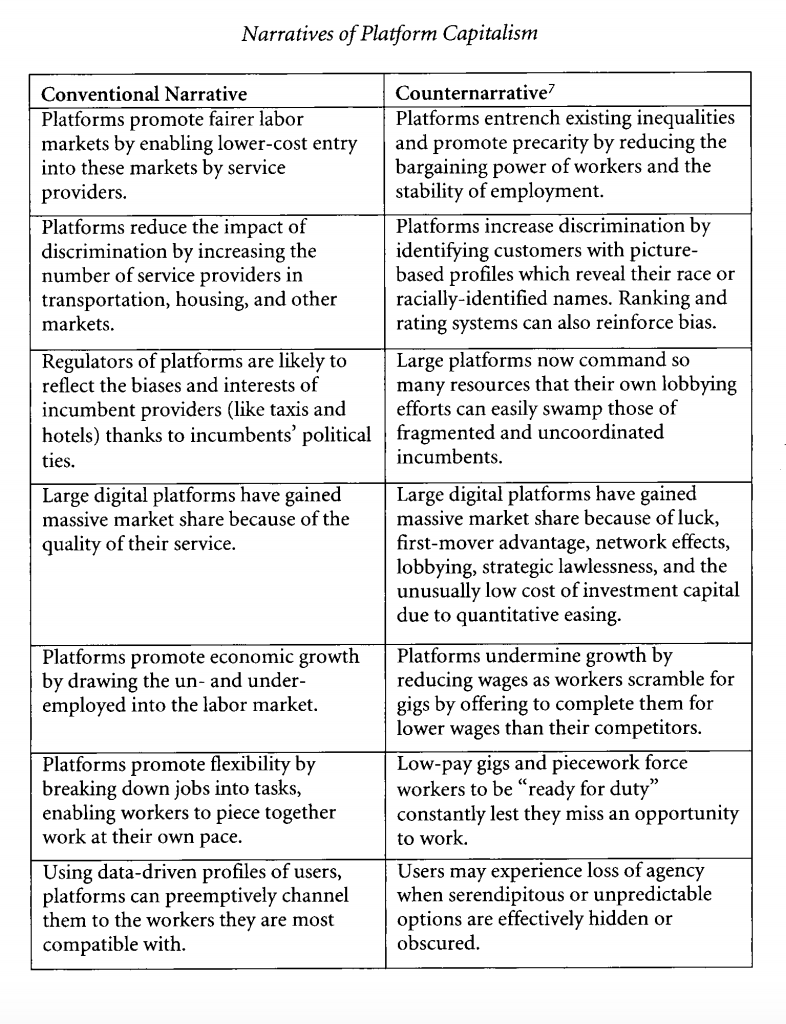 Moreover, in his book ‘platform capitalism’, Nick Srnicek shows a critical view towards the leading capitalist firms. He points out that data is the most crucial factor for the digital business models like Uber, Facebook, and Google. This data management allows them to rule over their competitors. Furthermore, these platforms rely on the ’network effect’ which automatically ends up in monopolistic structures. The bright new future of ’shared economy’ is questioned by this book by arguing that society lives in the latest form of exploitive capitalism. A minor number of monopolistic platforms held responsibility for the economies environment and claiming the benefits for their own. The author calls these platforms the new ‘intermediaries’ between the users. In 2016 Facebook, Alibaba, and Google alone earned fifty percent of the digital advertisement. The only chance for competitors to keep up is when they adopt their data extraction and management. In the future companies will get ranked by their ability to collect and analyse data. The actual main focus of the monopolist is ‘artificial intelligence’ and the investments seem to rise. (Srnicek, 2016)

Uber has faced a lot of regulation issues on a global scale. In most of these cases Uber has got away with only a black eye because the bans were temporary instead of being strictly enforced. The future is unwritten and the next steps unpredictable. Uber needs to understand its responsibility for fair labor and user security.In short, Uber can not play outside the rules. The debate between ‘shared economy’ and ‘platform capitalism’ does not find and an end in this paper. Although, Uber shows innovation there regulation still need to be discussed.

Dudley, Geoffrey, David Banister, and Tim Schwanen. “The Rise of Uber and Regulating the Disruptive Innovator.” The Political Quarterly (2017).

Dillahunt, Tawanna R., and Amelia R. Malone. “The promise of the sharing economy among disadvantaged communities.” Proceedings of the 33rd Annual ACM Conference on Human Factors in Computing Systems. ACM, 2015.

Davis, Alex. ‘TO SAVE ITS SKIN IN LONDON, UBER RALLIES THE PEOPLE’. Wired. 23. September 2017 https://www.wired.com/story/uber-london-ban-tfl/