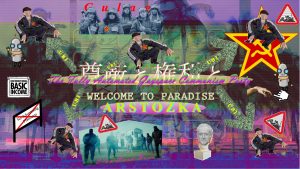 This visualisation is the end result of a fantasy scenario conducted in class where the goal was to create a postcapitalist utopia, complete with a democratically elected name, political party and laws. The game was designed to introduce ideas of hegemony and utopian futurism by active engagement. In the run up to the elections in the final hour, the class led a debate on creating said nation, relating discussion throughout to the readings.

The conceit was influenced by the outsider-artist type character of the CCRU, associated with Nick Land and former members like Mark Fisher. A profound and explicit link was made there between the legacy of Marxist debate and cutting edge imagery, cultural engagement and utopian fantasy. In the case of our class, the utopian postcapitalist future was envisioned as being a land led by the Fully Automated Luxury Gay Space Communism Party. The party platform was established as being anti-work and pro-automation. In addition, the uniform is a slavic tracksuit, squatting is considered a national sport, and – though it’s ultimate fate was left up for appeal – a statue of Jeremy Corbyn was placed in the city centre.