A Foucauldian Genealogy of Cybernetic Subjectivity

The visualisation establishes a Foucauldian-style genealogy of cybernetic subjectivity.

Inspired by this monogram by Suzanne Treister, it is intended to give an overview of the concept of cybernetics, its production of subjects and introduce key players and ideas that helped to form the cybernetic paradigm that has significantly influenced media theory. 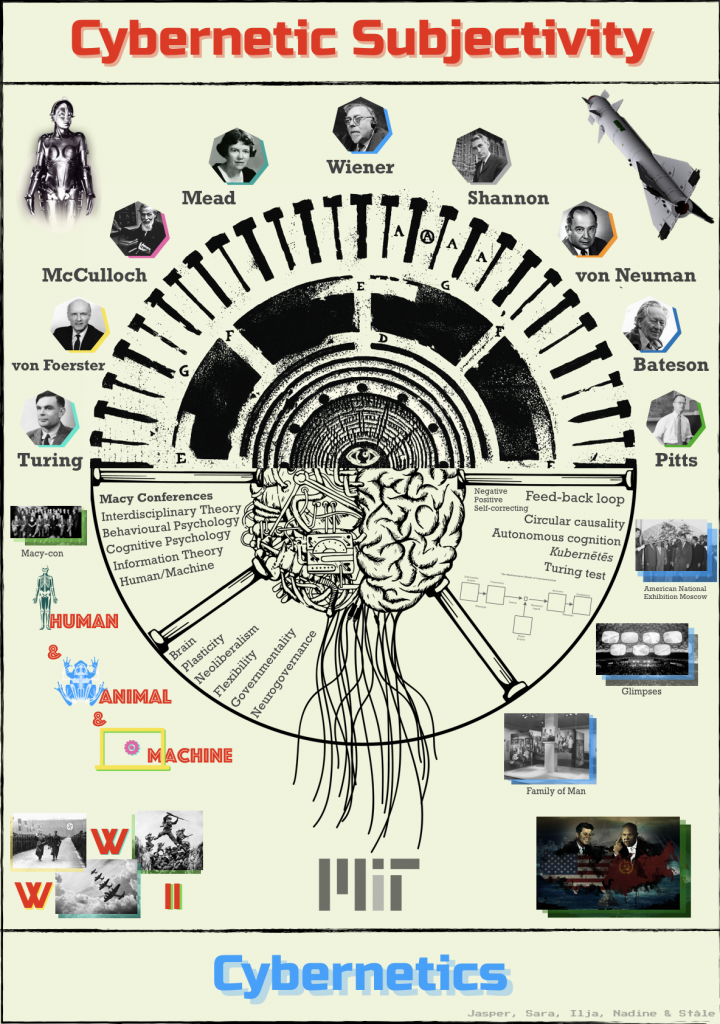 The concept of cybernetics emerged during the interwar period and the Second World War due to the increased interest in computing and technological innovation. Together with systems theory and information theory, the rise of cybernetics was enabled by immense amounts of funding that science and engineering received, especially in the United States.

For example, the Macy Conferences held in the U.S between 1946 and 1953 brought together an interdisciplinary group of academics to exchange ideas on, for instance, complexity, self-organisation and dynamic system to rethink the barriers of technology.

The meetings worked to dismantle the boundaries of humans, animals and machines as well as to establish the computer as a key scientific project that would come to form future possibilities. Conditioned by the principles of computer as the information-feedback machine, cybernetics emerged to explain the behaviour of human and nonhuman organisms.

The concept of the feed-back loop was seen as the fundamental mechanism that explained any organism’s interactions with their environment. Thus, the aim of cybernetics can be considered in terms of efforts relating to establishing a unifying language to explain the behaviour and cognition of all human and nonhuman organisms. As such, it continues to inform contemporary thinking and practices around information systems.