Reading News From Knowhere in the Post-Truth World


Misinformation is one of the global risks outlined by the World Economic Forum in their Global Risks 2013 report. The world is grappling with the viral spread of unvetted information in a hyperconnected world. News media are implicated in perpetuating this pandemic. The extremely poor rating journalists received in ‘being objective’ is indicative of a rising mistrust in the press (Zúñiga and Hinsley, 937). The lack of consensus on what counts as the truth is even more unnerving. This resulted in calls for more objective, impartial reporting.

Knowhere, a news publication that ‘uses machine learning to write unbiased coverage of the day’s biggest news’, responds to this clarion call. Knowhere’s AI peruses the internet, analyzing biases, factual claims, and narrative strategies in news reports published by sources as varied as The New York Times and Breitbart. Then, it composes three spins for every major news story – Left, Right and Impartial. The technology is extremely time-efficient, taking only between 1-15 minutes to do so. Once this is done, human journalists review it, thereby also training the machine learning algorithm. One of the founders, Barling, said, “As a Knowhere reader what you are signing up for is the truth and the full context around it” (Ha). Let’s examine how Knowhere delivers on this.

Three Sides (Spins) to Every Story

The following screenshots show the three versions of the story on the sexual misconduct allegations against Kavanaugh:

Consider the featured image. While the Left version makes a strong emotional appeal framing a desolate young girl in the background, the Right version strips the image of the larger context, putting a defiant Kavanaugh in focus. The phrasing of the headlines is telling too. The Left version emphasizes the fact that a ‘Supreme Court nominee’ was accused of sexual harassment while the Right version hastily adds that it was ‘decades ago’. The impartial version sticks to the fact.

In this way, the ‘ideological fault lines’ underlying this story is made explicit (Raeijmaekers and Maeseele, 658). Presenting a singular, uncontested version of the truth would be camouflaging the ideological hegemony that informs it. The three spins are meant to sensitize the audience about how bias operates through word selection and emphasis. However, this will eventually be phased out, retaining only the impartial version (DeGuerin).

It is crucial that journalists disclose how AI is used in news creation, insists The Tow Center’s report on the implications of AI on journalism. Biases are often baked into the choices that an AI is trained to make. Knowhere is pretty open about the possible biases that might have crept in.

One, the founders preemptively weighted news sources on the basis of trustworthiness (Cho). This served as a starting point for the algorithm to perceive the credibility of news sources. Two, the human journalists pick which stories to cover. Finally, Knowhere does not do original reporting. This makes clarity on what counts as evidence in this algorithmic/computational journalism essential (Anderson, 1016). To this end, the sources that went into the creation of every story is listed at the bottom. These are ranked based on how trustworthy each source is, for that particular story. Here’s an example: 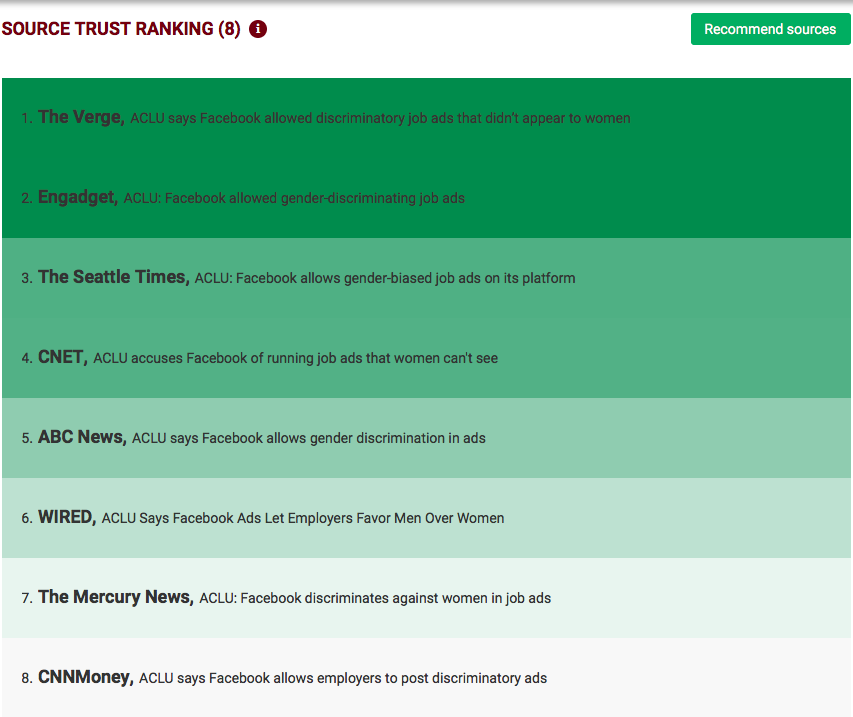 We do not however, get to know more about what parts of a news story the algorithm deems fit to include.

A discipline of verification is at the heart of journalism. Journalists verify the validity of news events, thereby establishing ‘jurisdiction over the ability to objectively parse reality’ (Hermida, 659). The proliferation of information online poses a threat to this journalistic function. Hermida sees potential in tapping into the distributed capacities of networked individuals to collaboratively verify the truth.

Knowhere does precisely this. Barling sees the platform as a ‘partnership between people and machines’ (Harding). As we saw earlier the founders and other human journalists play a large role in verifying the impartiality and factuality of stories. Readers are also encouraged to participate in this movement towards perfecting impartiality.

Readers can assign a bias score to each spin of every story. This rating system is presented as a spectrum ranging from extreme left to the extreme right (see below). User feedback trains the algorithm to write more impartial stories.

Readers can also recommend sources to the AI. However, both these features are locked for new users. In order to gain credentials, you have to get your friends to sign up and share Knowhere stories on social channels. Here’s more on that: 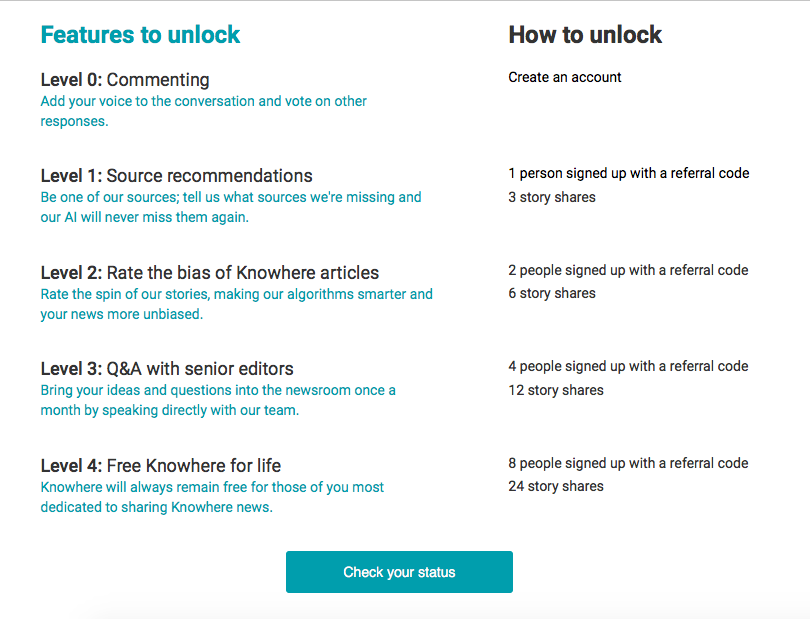 Knowhere in the larger scheme of things

In his article, Brown introduced Knowhere using the phrase ‘Fake news meets its match’. To an extent, this is true. Knowhere counters the information abundance brought about by digital communication technologies with technology. It overcomes the limitations human journalists face in fact-checking every fake news story there is. It is also laudable that Knowhere does not ask us to bow down before an all-powerful, impartial AI god who is the absolute authority on ‘truth’. Rather, we are invited to participate in the process of understanding where our news comes from, suggesting improvements and adding our own judgements about the bias of a story. Such a collective dimension of sense-making (with its caveats and conditions) is where I see the promise in Knowhere.

Waisbord argues that fake news and post-truth are not restricted to journalism. The fluid nature of public communication globally has enabled belief communities with varying epistemologies to be heard. They engage with and process news and truth differently. Inevitably, any hegemonic imposition of a true, impartial narrative will be contested.

This is productive and positive in a way. It necessitates a revision of our understanding of the truth. Truth is not an attribute of certain news stories, but a collective activity where arguments are developed, shared and discussed. This is impeded by social networks and recommender systems that reinforce ties between like-minded individuals, closing off the potential for dialogue.

Journalism should nurture ‘a sense of public commons’(1875) to facilitate truth-making. Knowhere does this by bringing together readers, human journalists, diverse sources, and technology in their truth-making process. Therefore, this could very well be a first step towards a radically new journalism for the post-truth era.

Knowhere news: how it works. Retrieved September 23, 2018, from https://knowherenews.com/how