The new Xbox adaptive controller, another step towards digital inclusion?


It is not easy for some players to enjoy the virtual experience of video games. Microsoft noticed the issue and, to break down the barriers faced by people with disabilities, the multinational technology company just launched a couple weeks ago, a disability-friendly controller for Xbox and PC. But is such a controller really just a controller ? 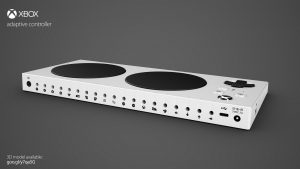 The Xbox Adaptive Controller is a collaborative project undertaken with US associations as well as disabled people. It was designed to make it easier for players with disabilities to enjoy their Xbox (and Windows 10 environment) and improve accessibility.

Its main interest? It is fully customizable. Gamers with disabilities had to be able to use a foot, a hand, a shoulder or even a cheek that do not allow traditional controllers.

The controller has two large programmable buttons and 19 jacks that can be connected to a range of accessories and two USB ports and thus provide open source access for a third party device (bite switches, foot pedals, touch-sensitive pads, and others). The design is wireless, but is also delivered with an optional power supply, to make it easier to support and accommodate extra devices including mouth-operated ‘sip and puff’ quadsticks (Stuart, Microsoft to Launch Disability-Friendly Xbox Controller). A dedicated app was created to remap buttons, create controller profiles and find what works best for them (Ghoshal, Microsoft Unveils Its Xbox Adaptive Controller for Gamers with Disabilities).

This new controller is supposed to cover the majority of motor disabilities, but Microsoft believes that since the device is easy to use, it should be suitable for people with mental disabilities.

For Microsoft, it was important to make the controller affordable (89,99€), at about the same price as other devices on the market, and cheaper than any custom-built solution (Stark & Sarkar, Microsoft’s New Xbox Controller Is Designed Entirely for Players with Disabilities). 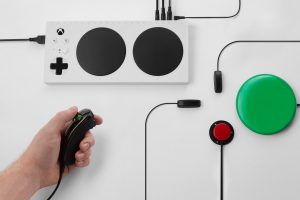 Exclusion in the digital field

The video game world has always been more or less closed to gamers with disabilities. Most of the games require precise motor control, although they do not explicitly say it, the interface itself suggest that if you are not the kind of user they want you to be, you will not be able to play (Ellcessor, 74).

If, we refer to Mel Stanfill’s ideas as “web-based structured actions of the same by doing things more possible than others. A site’s design makes a normative claim about its purpose and appropriate use that both demonstrates an understanding of users and builds a set of possibilities into the object”(Stanfill, 2), then we can assume that game designers are setting the stage of play, and they have failed to overcome the social inequalities present in our society (Embrace, Wright & Lukacs, 142).

Even Microsoft’s senior inclusive designer, Bryce Johnson declared : “It assumes I have two hands to hold it, two thumbs to hit the analogue sticks, and the fine motor control to get at all the buttons. It also assumes I have the endurance to hold it for a long gaming session. That’s a barrier.“ (Armstrong, Stephen. Here ‘s How the Xbox Adaptive Controller Is Getting People with Disabilities Back into Gaming).

Indeed, in the past, some modification has been made to make video games more accessible, by adding the contrast adjustment, the diction of written contents delivered by a narrator for blind persons or the subtitles for hearing-impaired people. But nothing had really been implemented for people with disabilities, pointing and gesture interface are difficult for individuals with physical impairments. Admittedly, progress has been made, and new inventions such as an eye-tracking system, an on-screen pointing or a data glove, were introduced to the video game market, although this kind of devices remain expensive and can present some difficulties in the compatibility with other games (Yuan, Folmer, Harris,87 ). One of the solutions of the accessibility problem “would be the modification of the gaming interface itself. This type of modification allows disabled gamers to enjoy the same games as anyone else” (Breugelmans, Lin, Mourant & Iversen, 2384).

The launch of Copilot in 2017, a new function on Xbox, that connects two controllers to play in complementarity, as well as the creation of the Microsoft Tech Lab, is supposed to reflect on the possibilities of accessibility. They have been big steps to open video games to other kinds of disabilities.

Chris Crawford came up with an interesting definition : “A game is an artifice for providing the psychological experience of conflict and danger while excluding their physical realization. In short, a game is a safe way to experience reality” (Crawford, 12). This is particularly true for people with limited mobility, that already live with the physical barrier in their everyday life.

Playing video games can be seen “as an amplification of our contemporary fantasies, interactive media provides a virtual background for creating, reproducing, and sometimes even transgressing our everyday prejudices and assumptions”. Games are not just games, they create social ties, they help develop the social capital of gamers. But also allow the construction and affirmation of its identity (Embrick et al, 143).

The virtual world can remove some physical barriers and much social discomfort experienced in face-to-face meetings. Important lever of social construction, video games change “the way people perceive, learn about, and interact with the world around them” (Yuan et al, 2).

Ian Bogost explains by the words of the Dutch historian Johan Huizinga that playing promotes the formation of social grouping, groups whose cultural meanings persist after, or outside, the play itself (Bogost, 115). Contrary to what most people think, playing video games, do not impede socialization, games make social interaction even more possible and let gamers in less isolation (Embrick et al, 79).

Nevertheless will a minimum accessibility standard for every video game ever exist? Or even a total accessibility to new technologies for people with disabilities? Finally, it must be understood that games are not just entertainment. They can have other purposes, such as help in social interaction, and make people part of society. In addition, games can also be a base for learning, informing and a literacy tool (Yuan et al, 3). But that is another debate.

Armstrong, Stephen. “Here’s How the Xbox Adaptive Controller Is Getting People with Disabilities Back into Gaming.” WIRED, WIRED UK, 17 Sept. 2018, www.wired.co.uk/article/microsoft-xbox-adaptive-controller.