“Can I Read Your Diary?”

Becoming a journaling virtuoso has propagated as an on-trend goal across social media for a few years now, leaving anxious teens with a desire to write down ideas – the more controversial, the better – in a creative, visually pleasing and Instagram-worthy fashion. But what happens when not only metadata escapes one’s private space into the abyssal void that global databases have become, but also the most intimate thoughts? The figure that was once only vaguely contoured by a name, age and perchance favorite songs is now correlated to willingly provided data, preferences and personal daily life details. A “new algorithmic identity” (Cheney-Lippold 165) or an addition to an already existing one is attached to an individual through the collection of their data. Privacy is dismantled.

However, there are alternative reasons to place (on-/offline) journaling in a positive light and question the gravity of data collection and the users’ consequent privacy issues. Mental illnesses such as depression, anxiety and bipolar disorders affect a substantial number of people every year, adding up to more than 600 million, according to the World Health Organization. Empowering individuals, teams and organizations worldwide to boost confidence and reach their full potential has thus become a mission which the founding group at Reflectly, an increasingly popular Danish app, has decided to pursue and adopt for their future developments. (Brøgger-Mikkelsen)

Reflectly – not your usual type of journal

“Types of machines are easily matched with each type of society […] because they express those social forms capable of generating them and using them.” (Deleuze 6) Prevalent social issues have become the starting point for developments across all fields. The founders of Reflectly have seen a gap in the market which could – but most importantly needed to – be filled by a simple but innovative concept which merges the ease of operating a mobile application with an almost empathetic, inviting “personality”.

“We are combining a traditional motivational tool like a journal with cutting edge AI-technology to make sure you and your team unlock your full potential.”

“We think that we can create a global brand and turn Reflectly into ‘Adidas for the Mind’.” (Brøgger-Mikkelsen)

What sets Reflectly apart from other journaling apps already on the shelves of an overly saturated market is the artificial intelligence underlying it. The ingenious question-based structure leads to user generated data which is further handled to shape daily audio reflections tailored for the content users have provided as part of their answers – a feature that makes the app stand out among the plethora of available meditation programs. (Farmbrough) By the end of May 2018, the app had a solid and promising foundation, rendering equally professional cross-platform results as well as creative content. Therefore, journaling, like many other activities, has been translated into the virtual world while bringing along a set of changes in one’s perception and performance on-platform.

The implications of Reflectly found at the design level are plentiful, as there is “no such things as a ‘neutral design’” (Thaler and Sunstein 3): enhancement of one’s freedom and directing of actions and thoughts by means of affordances and nudges, invitations to continuously engage and provide data through exclamations and interrogations while capturing the user in a “bubble” of perpetual use and augmented attention arrest.

Data through a magnifying glass

Our everyday lives are infused with smart technologies (Morozov 20) which make every activity seem facilitated, improved, less time consuming, more efficient, all through clicks (more recently “taps”) away. We are living in an information-driven society, where knowledge, especially regarding personal data, is valued and exploited to its highest potential and oftentimes tainted or reshaped for purposes which users might be unaware of. According to Kitchin, “data provide the basic inputs into processes […] that seek to create information and knowledge in order to understand, predict, regulate and control phenomena.”

It is true that the data is of absolute necessity in order for Reflectly to supply a continuous flow of tailored information to its users and this is conditioned by a necessary trade-off of data between the two parties. Computers can only compute based on given input, therefore, “the less a system captures, the less functionality it can provide to its users” (Agre 749), thus making data collection a requirement.

Aside from representing a new medium to express oneself, Reflectly is a distraction from real life where the user is constantly engaged and invited to respond, from the smiley face icon to the deeply personal questions he/she answers. The app is tapping into a “gamification” structure (Morozov 203) where “players” complete tasks to discover new reflections and unlock premium rewards that, in part, incentivize daily engagement, therefore more time spent on providing data which is collected and processed. Endless, looping momentum.

“The World’s First Intelligent Journal” as Reflectly has been advertised online, collects – as openly admitted by the founders and explicitly stated in the privacy policy – personal (and oftentimes sensitive, depending on the case) data which is processed through encrypted channels. (Farmbrough) But as high as the level of data protection might be promised, users should type in with caution. Data from camera roll, other connected interfaces (Facebook, Instagram etc.), location, mobile device data and notifications are some of the elements Reflectly holds the right to collect and store for monitoring and analyzing usage and therefore improving the experience with the app. It is specified that user information will not be sold, distributed or leased to unrelated third parties (unless permission is granted).

Controversial as it seems, we could be considered enslaved figures dancing to the rhythm of new media corporations and modern means of surveillance, and Reflectly, as a blooming new media app, is no exception. Control of data, however short term and of rapid rates of turnover, is continuous and limitless (Deleuze 6), blurring and ultimately erasing the borders between private and public. Although resonating with the millennial generation, Reflectly should raise a series of questions regarding data analytics, activity tracking and information disclosure and commercialization: 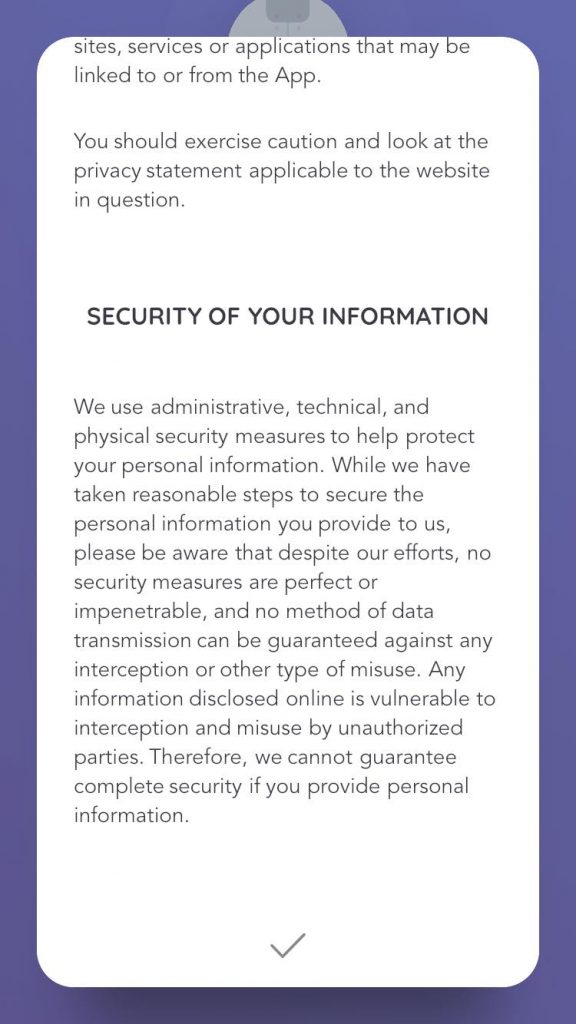 Should journaling transcend the conventional ‘pen&paper’ into the virtual medium? Is it safe for not only metadata but great volumes of utterly personal data to pierce the complex textures of worldwide databases? Is total privacy a concept of the past? But most importantly, to what extent do users of such interfaces value their privacy, if at all, and where does their free will stand?

If an arbitrary individual were to assertively demand “Can I read your diary?”, how would you respond?