From Cable TV to IGTV: The media might indeed be the message.


Abstract –  Instagram’s new application, IGTV brings about a change in how we consume media. Will it act as a replacement for platforms such as YouTube, Vimeo or Snapchat sending them out of business? IGTV also raises questions about how the content shared has an impact on the audience’s perception and also the choices they have based on the medium of communication. 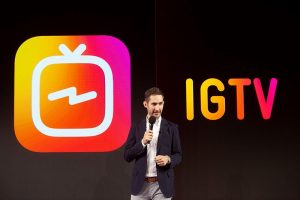 Launch of IGTV in San Francisco 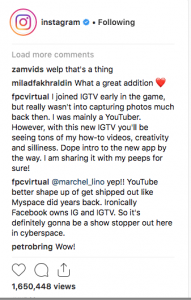 Remember the days where you would wait for the school to end, then rush home to watch the afternoon cartoons?

I’d say not much has changed. As soon as a class or work finishes, we instantly check our smartphones. Be it to text people back, check our social media notification or simply go through our news feeds. It has already become very similar if not equivalent to that feeling of being back at home in front of the television, however, the wait is now gone. Also, the content to has had a change primarily due to the way we access it. Traditional forms of media have been going through a lot of change. People are now able to watch TV shows or films on whatever device is available to them. It started with sites such as YouTube, Vimeo or even Netflix and has now evolved to an extent where an app can replicate the whole experience of just switching on the Television set and browsing through the channels. Instagram’s new application or feature, ‘IGTV’ is just another example of this change. It allows vertical videos, thus enabling audiences to watch with ease on their smartphones, and makes it easier for bloggers, influencers and also companies to upload content.

As defined by Instagram in a press release, IGTV is “a new app for watching long-form, vertical video from your favourite Instagram creators.”  enabling audiences to watch them with ease on their smartphones, and makes it easier for vloggers, influencers and also companies to upload content. (Brucker)

While we can download the standalone IGTV app, we can also view the videos directly from your Instagram app. In this digital space, your favourite content creators and brands can produce videos up to an hour long. (Constine)

The IGTV app is thus an example of a persuasive technology which uses its design, research and analysis of interactive computing products created for the purpose of changing people’s attitude and behaviours. (Fogg)

Thus like most persuasive technologies IGTV too takes on a variety of roles in persuading and influencing its consumers in the form of audiences who are not influenced by Instagram influencers, vloggers, artists and activists but also can be persuaded by businesses that can sell their products by providing solutions in the form of their products through these videos without having to use another source (example YouTube) in order to showcase their products or send their message.

Although unlike traditional TV or even newspapers whose primary purpose according were to sell advertisements, IGTV does not have advertisements yet however, businesses can and are using them to advertise their products without being in the form of a traditional advertisement which under normal circumstances we may ignore or reject.  “There’s no ads in IGTV today,” says Systrom, but he says it’s “obviously a very reasonable place [for ads] to end up.” He explained that since creators are investing a lot of time into IGTV videos, he wants to make them sustainable by offering them a way to monetize in the future.

It is rightly said that apart from distribution, sharing can also be an act of communication. (John) 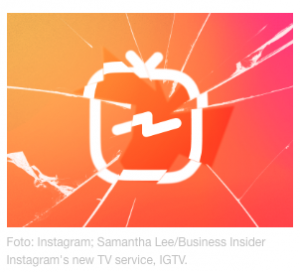 Recently, IGTV was found to recommend videos which displayed unsettling content such as that of child exploitation and genital mutilation. American financial and business news website Business Insider conducted an investigation, which revealed that the IGTV algorithm was recommending disturbing, and potentially illegal footage. Videos displaying suggestive footage of underage girls as reported to police by a children’s charity due to concerns of the legality. Instagram was found to take five days to remove the videos and issued an apology to those who viewed. They quoted that they want IGTV to be a “safe place for young people”, however, the findings were definitely incredibly unsettling. (Hamilton)

This also goes to show that IGTV is still quite recent compared to its competitors and not fully equipped for handling such situations. problematic content can be handled in more subtle ways. For example YouTube “algorithmically demotes” problematic videos, so they do not appear on lists of the most watched, or on the home page generated for new users. Twitter does not censor profanity from public tweets, but it does remove it from their algorithmic evaluation of which terms are.Trending.(Gillespie) 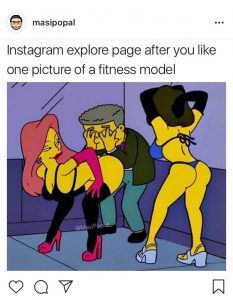 The meme depicts the way recommendation algorithms work on Instagram.

Algorithms are now a key logic governing the flow of information on which we depend, with the “power to enable and assign meaningfulness, managing how information is perceived by users, the ‘distribution of the sensible.'” (Gillespie, Boczkowski and Foot)

According to Forbes, with societies always being connected today,  IGTV may provide a convenient platform for television consumption, which may change the way we watch TV forever. However, I do not completely agree with this. It brings me back to think, no longer is it the same innocent process of coming back home from school, turning on the TV and escaping into another world. In fact with the ease with which content is available, for people to share as well as to consume with the evolving media, changes not just the experience for the audience but also the content itself and the influence it can have on the audience depending on the choices the medium might give them.

“We are too prone to make technological instruments the scapegoats for the sins of those who wield them. The products of modern science are not in themselves good or bad; it is the way they are used that determines their value.” That is the voice of the current somnambulism. (McLuhan Understanding Media: Extensions Man) Technology in any form could do anything but add itself on to what we already are.