Is Blockchain Technology on the Verge of Revolutionising Our Lives?


Blockchain technology was originally created by Satoshi Nakamoto back in 2008 as the platform to power the cryptocurrency Bitcoin. While Bitcoin has been widely known for a number of years, it is the technology behind it that is the new buzzword on the internet, as people become more aware of its incredible capabilities. Blockchain technology has huge potential to change the world and how it operates and is “viewed by many as a solution to trade and settlement inefficiencies, and to improving transparency and reducing the risk of fraud” (Payne). Blockchain developers are currently in very high demand as its many futuristic possibilities are beginning to be explored.

The Blockchain is a decentralized technology that is made up of a network of computing nodes that self-audit every digital transaction in a manner which allows only one true copy of the ledger to exist. “The blockchain is an incorruptible digital ledger of economic transactions that can be programmed to record not just financial transactions but virtually anything of value” (Tapscott). The applications of blockchain can be implemented in as widely diverse fields as artificial intelligence and entertainment. 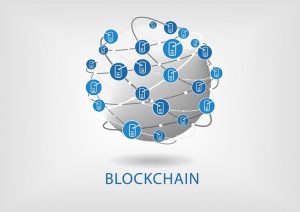 Firstly, let’s take a look at the potential of this emergent technology. In the post Cambridge Analytica scandal age, individuals have become increasingly anxious about the data that online companies have about them and how they use it (Pink). The blockchain can stop companies from selling your data to advertisers by allowing you to choose what information you want to share with whom at specific times. Your data will be encrypted. As William Mougayer puts it: “Online identity and reputation will be decentralized. We will own the data that belongs to us” (Blockgeeks). The goal of blockchain tech is to create a decentralized environment where no third party is in control of our transactions and data.

One major benefit of blockchain technology is that it eliminates the risks with data being held centrally. Computer hackers have no one vulnerable spot to attack, as it stores blocks of information that are identical across its network. Therefore, when you store your data on the blockchain it is incorruptible. In this way, blockchain can ensure complete democracy in government elections by preventing any computer hackers from rigging the electronic system to manipulate votes (Daniel). Private individuals can confirm that their votes were counted and confirm who they voted for in an efficient way.

How close of a reality is the world of decentralized apps using blockchain technology?

HTC aims to be the first company to release a blockchain smartphone, having announced in May 2018 that they will launch the smartphone by the end of this year. The Exodus is branded as an “agent of decentralization” and will feature a universal wallet and hardware support for all major cryptocurrency as well as decentralized apps. They will face some competition in the market of blockchain smartphones from Siren Labs who plan to release a similarly priced ($1000) decentralized smartphone in 2019 (Marinoff). With smartphones like this in production it makes the many lofty claims of blockchain a conceivable reality. 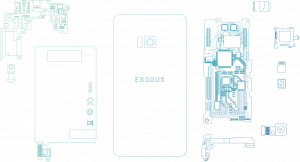 One of the most exciting possibilities for the use of blockchain is the power it can give back to creatives. Just like technology disrupted the traditional music industry in the past, the prospect of new blockchain streaming services threaten to upset the industry once more. This time with the potential of turning the control back in favour of the artists. “Multiple blockchain companies provide content streaming, and artists receive one hundred percent of the revenue their works generate” (Thornburg). With the number of applications of this nature that are in development right now, which all claim to have the artists’ and consumers’ best interests at heart, the music world is undoubtedly set for a shake-up.

Many of these streaming platforms are powered by the Ethereum blockchain; the second biggest cryptocurrency after Bitcoin (CoinMarketCap). The platforms Opus and Voise guarantee “artists receive all proceeds from their work forever and this contract never expires” (Thornburg). Whereas, the platform Bitsong claim that both the artist and the user will benefit, with the user being paid for “user attention” (Bitsong). These incentives for the listener could entice people away from established music streaming platforms like Spotify. 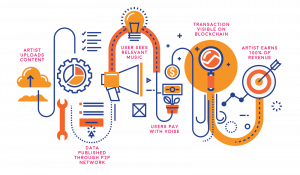 Overall, blockchain technology is still in its infancy and thus struggles with a variety of technical problems such as scalability and latency (Hawlitschek). Latency is the lag between the point at which a transaction is made and when the transaction is completed. Making a block and confirming the transaction should happen in seconds, while maintaining security (Yli-Huumo et al). However, a Bitcoin transaction can take up to 60 minutes or even a day or two to get confirmed (Khatwani).

In order to complete a transaction on the blockchain, you must pay a certain amount to miners for it to be verified. While these can be microtransactions, it becomes significant for larger amounts of money. Scalability issues come into play when we consider the number of people on a blockchain network and the number of verifiers it takes to complete a transaction. If the blockchain gets more congested and people are waiting longer for transactions, the only solution would be to pay more money to verifiers in order for your transaction to be completed faster, As the cost of verification increases, the underlying currency becomes less viable, thus creating an unsustainable model. 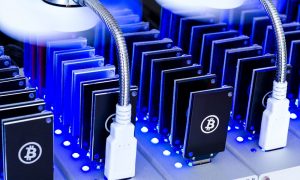 Another limitation of using the blockchain is that it relies on the knowledge that it is mathematically impossible for a single entity to break the system due to the lack of computer power required to do so. However, with the advent of Quantum Computers, the cryptographic keys may be easy enough to crack through brute force approach within a reasonable time (Zikratov et al). This has the potential to destroy blockchain technology.

The aspects of blockchain technology that can potentially increase accountability and reduce abuse of power can also provide people with a new power to misuse. The main ethical concern associated with blockchain technology is that people can use the anonymity of the platform for illegal activities. As transactions become impossible to trace, it opens up a space for people to forego ethical considerations with their online activity. As “people are much more likely to commit violence and injustice against victims they don’t see” (Bulkin), this could result in the proliferation of such industries as contract killing, child pornography and the illegal weapons trade. If unethical behaviour is allowed to prosper in the blockchain environment, the problems which it aims to solve will be undermined.

There are still many issues with the blockchain that need to be solved before the true potential of the technology can be realised. It will be interesting to follow where blockchain is heading and whether it can lead us into the future or to our own demise.

Bulkin, Aleksandr. “Elephant in the Room: Ethical Blockchains and the Conundrum of Governance.” The CoinFund Blog, The CoinFund Blog, 22 Apr. 2016, blog.coinfund.io/elephant-in-the-room-ethical-blockchains-and-the-conundrum-of-governance-a11d0f9c4c56.

Khatwani, Sudhir. “How Long Does It Take To Transfer Bitcoins And Why?” CoinSutra – Bitcoin Community, 4 Sept. 2018, coinsutra.com/bitcoin-transfer-time/.

Tapscott, Don, and Alex Tapscott. Blockchain Revolution How the Technology behind Bitcoin Is Changing Money, Business and the World. Portfolio Penguin, 2016.