In other parts of the world it is already a well-established marketing technique; celebrity’s being paid to tweet, or post on Facebook and Instagram. However in “down to earth” Netherlands, this trend has just recently began to emerge. Social media influence strategies has started popping up out of no-where. I am not able scroll trough my Instagram timeline anymore without being bombarded by pictures of beautiful girls (or guys) nonchalantly holding a cup and claiming to have found “the best tea for weight-loss!” or a stylish picture of their outfit tagging all the brands they are wearing. The captions under these pictures are almost never followed by the required #ad (Jarvis, 2017).

The meaning of a social influence is quite clear according to Wikipedia: “The effect words, deed or presence of other people has on our own thoughts, feelings and behaviour”. And some people simply have more influence than others.

This age old principle has penetrated the the world of online marketing. Especially through the rise of social media, traditional methods have substantially changed. Previously, companies could afford to send an unnuanced message out in to the world. The trusting consumer would believe you for your word.

But as a result of, knowledge has become much more accessible and in turn the market is more transparent. Consumers are not that easily fooled anymore and are more in touch with each other and aware of what others are consuming and how others feel about certain brand and companies with the rise of social media, word to mouth has gotten a whole other dimension.

Research done by Nielsen shows that the opinion of total strangers online, is seen as much more trust worthy and believable than information found on website of companies. This creates a rat race to get to the influencers, and organisations are steadily more willing to pay big bucks for this kind of marketing. 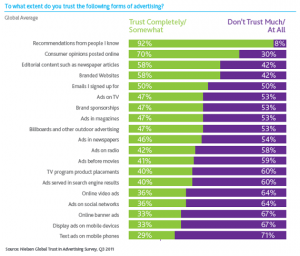 Another factor in influencer marketing is that the consumer is not only guided by credibility and relevance of the influencers, but also by the medium itself. Research show that blogs are much more influential than, for example, twitter of Facebook when it comes to guiding consumer behaviour (“Digital Influence: Blogs Beat Social Networks For Driving Purchases”). The same study shows that the size of a community does not matter all that much. People even prefer a smaller community to influence them than a larger one.

How do you measure influence?

All good and well, but social influence marketing, only works when influencers are actually influential and when their followers are receptive for it. One of the tools available to gain insight into into online influence is the tool Klout. The so-called Klout score determines how much influence a person has on different social media platforms. They are given a number between 0 and 100. The higher the score the higher their online influence is. But how do influencers make sure that they give both the consumer and the company paying them for their influence what they want? There is a fine line between social influencing, and straight up promoting a brand or company for money. With consumers becoming more and more aware of social influencing, the credibility of the influencer diminishes.

I am very curious as to what the future holds for this type of marketing strategy. How much longer will social media be able to influence us when the credibility of its users is put to the test? What happens to the trustworthiness of social media and review sites? The consumer is looking for transparency and authenticity, but when recommendations are being paid of, the social aspect of it, loses its value.

Research by Reevo makes the importance and the dependancy of this type of marketing point noticeable. The research shows that on one hand, 4 out of 5 people makes use of reviews both offline and online when choosing to go on a holiday, but on the other hand only 27% is afraid that the the reviews are actually paid ads.

So it is probably time to start using influencer marketing in a different way. Yes, we like to be influenced by opinions of others, and yes this type of marketing should be allowed to be used online because there is simply no way around it. But it can be done in another way. The use of social influence is only useful when the message is honest and sincere. That is the main reason social influence usually works best in personal circles. A celebrity will certainly gather attention, but it is rarely the decisive factor.

Another question to ask is if money is the right to resource to be handing out. A truly brand loyal influencer would be much more appreciative with recognition, and involvement than with a pay check. The current strategies in influencer marketing do not garner loyal influencers and consumers, and thus their credibility dubious per definition.