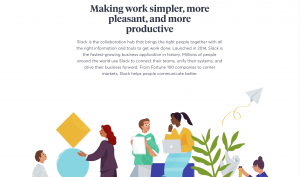 1)- Technology in the Workplace:

“As innovations in technology continue to proliferate, employees working in the modern workplace have access to an ever-increasing number of new technologies” (Swaya and Eisenstein 1).

As it is perfectly indicated by Swaya and Eisenstein in their article cited above. Since the introduction of technology, the latter has moved from holding a rather exterior role where people would admire it and be amazed by its capacities to a more intimate role, straight into our lives both on the personal level and the professional level.

Being a millennial myself, I was surrounded and came across several new technologies throughout my life and most recently at my work which was quite an interesting experience.

Hence, I decided to elaborate on this experience by investigating the use of technology in the workplace through a specific app which I came in contact with at my previous job.

I’m sure by now you’re all just curious to find out about my experience but before I do that, I thought it is only befitting to reinvestigate the term of “new media” as it constitutes an important part of this topic.

As such, I would like to refer back to a very long but extremely essential quote from Mayer’s paper where he discusses and introduces the term “new media”:

In its most recent incarnation, however, the phrase has been widely adopted to refer to a series of scientific and  technological innovations, most of which achieved critical mass in the early 1970s, that led to the development of a considerable number of new methods for creating, transmitting, and storing information and to the large scale transformation of many of the more traditional media. Among the technologies usually included under the “new media” rubric are personal computers, videocassette recorders (VCRs) (…) (Mayer 124).

Looking at Mayer’s quote, we can note how “new media” has evolved overtime and rapidly merged into our lives. Slack is therefore a perfect example of how these innovations transformed and made it possible for this application to exist in our modern time.

For those of you who don’t know it, Slack is an instant messaging app that was designed to make work easier, pleasant and more productive as the logo seen above explains.

Once more, I have a rather long quote to share which was retrieved from Swaya and Eisenstein’s research. I chose it because it provides a fluent definition of what IM is:

IM is an electronic communications software that is similar to e-mail but that allows its users to have real time conversations. An estimated 7 billion instant messages were sent each day in 2004. 17 Millions of employees have downloaded IM programs onto their work computers and use them to communicate both internally with colleagues and externally with clients or personal friends during the workdays (Swaya and Eisenstein 5). 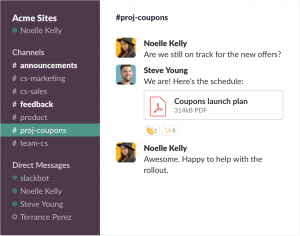 I will follow their definition by giving a brief description of Slack while also adding a link to a detailed tutorial on how to use it:

Simply put, Slack allows you to talk to your colleagues through several channels much like any IM app. There are public channels where anyone can take part into the conversation as well as private channels where only the invited individuals can participate.

To give you an example, at my previous workplace, I was part of a team of four so we had our own private channel to discuss our tasks which were specific to our team only. However, we were also part of public channels where we would discuss other tasks that required the cooperation of other teams.

You can also have calls on Slack, share documents as well as having direct messaging between a group of people or a singular individual based on whom you need to speak to (see Fig. 2 and 3).

Slack was so successful following its launch that it won an award for “Fastest Growing Startup”(Techcrunch, 2016) as well as many others over the following years.

Needless to say, Slack became a phenomenon in the business world and presently earned over 8 million daily active users, 70,000+ paying companies that use it as well as 500, 000 organizations.

However, as the saying goes, ‘with great power comes great responsibility’. Despite its success, Slack is surrounded by issues which I narrowed down to three crucial ones:

A)  Distraction: Using Slack opens up an array of “multicommunicating” which is explained by Cameron and Wenster as “the managing of multiple conversations at the same time that show a pattern of interleaved speaking turns (Reinsch et al. 2008).We consider MC to be a particular type of multitasking” (353).

Multitasking does not necessarily mean efficiency especially with Slack.  Having multiple channels can easily make the employees distracted by creating channels that are not work related or having personal conversations through direct messaging. Swaya and Eisenstein confirm this point in their paper by indicating how IM can “distract workers from doing their jobs when it is used for nonwork purposes” (Swaya and Eisenstein 5). 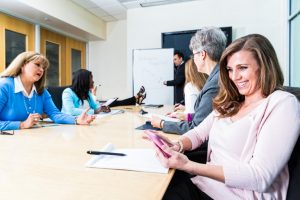 B)  Malfunctioning: When Slack has connection issues, it means day off for all of the employees. Since Slack is integral in the workplace, when it shuts down, all companies that use it immediately start praying that it gets fixed asap since their jobs are halted until Slack is back up and running. Just recently Slack had another connectivity problem on September 6th, 2018 the 3rd in a month. These complications have become a trend for Slack, happening every once and while as it is casually referred to in Techcrunch’s article. (Techcrunch, 2018) 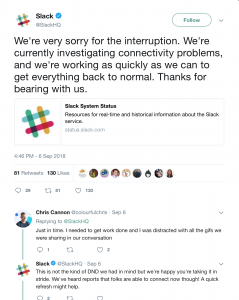 C)  Privacy Issues: That said, the most crucial issue with Slack concerns privacy. Much like most IM apps, Slack as a software has records of all of the messages made by the employees even after they were erased. Furthermore, these messages can be accessed by the administrator who allowed the employee to have access to the app in the 1st place. Recent Stats show that electronic monitoring has become more and more used in the workplace:

Despite the arguments used by employers to enforce these habits, having access to employees’ IM is a serious ethical concern which is perfectly analyzed by Miller and Weckert in their paper by stating that “If no harm is being caused by personal email, either to the computing equipment or to productivity, then monitoring what is said can have no purpose, except perhaps to satisfy curiosity.” (261). 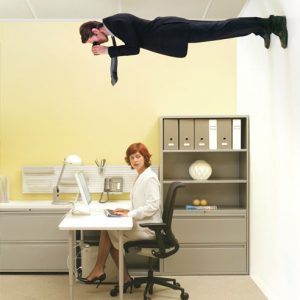 Overall, as we witness technology evolve in the workplace, we can definitely note how work has been made easier and more efficient, but it has also allowed for the creation of new advanced technical problems. And most importantly, it brought about new ways to infringe on the right of privacy of the employees.