Will Elli.Q be on your Wishlist? Artificial Intelligence within Elderly Care, a Closer Look


As we’re zeroing in on October 1st, the International Day of Older Persons, it’s high time we turn the spotlight to our expeditiously ageing world. While healthcare professionals are tasked with overcoming staff shortages and budget cuts, new startup companies have turned their attention to elderly care robotics to counter social vulnerability. Among them, Intuition Robotics are currently testing Elli.Q, a proactive ageing companion specifically aimed for private use.

Globally, the age group of 60 and over is surpassing any younger age group in growth. (“Ageing”) Based on data from the World Population Prospects, around 962 million people belong to this group as of 2017, comprising a whopping 13% of the global population. Moreover, this statistic is only expected to rise to 22% of the global population by 2050, accounting for 2,1 billion people aged 60 or older. (“World Population Prospects” 11-13) Nevertheless, even in higher-income countries, healthcare systems are unable to keep up, leading to a global “epidemic” (Sutherland 19) in elderly care. (“Global Elderly Care in Crisis”) In the U.K., public funding for the social care of the elderly underwent a dramatic decrease of  £1,2 between the years 2011 and 2014 alone. In another corner of the world 32% of Chinese aged over 60 suffer from poor health, 38% struggle with daily tasks, 40% presented symptoms of depression. (“Global Elderly Care in Crisis”) In real terms, these numbers create a climate of social vulnerability. (Khaksar et al 438-439) Social vulnerability “limits daily life and decision-making in a wider group of older people who are likely to have a loss of mental and physical functions” (438) This vulnerability fosters a need for innovation.

Artificial Intelligence to save the day

Across the press on innovative healthcare and service design, artificial intelligence is represented as a “key component of the future of healthcare” (Greulich-Smith). So far, researchers have established that assistive social robots can have a functional and an affective role. (Bemelmans et al 114) On the one hand, they can serve as  “an interface for elderly to digital technology.” (Bharadwaj) On the other hand, they can “help increase the quality of life of elderly by providing companionship respectively.” (Broekens et al) Despite this, elderly care robots are not currently doing as well on the market when compared to other service robots in the industry. (Bharadwaj) There appear to be two main reasons for this. First, there is a shortage in technology that appeals to elders willing to live self-sufficient lifestyles. (di Bucchianico 343) Secondly, these technologies fail to engage with their key demographic, the elderly. (Khaksar 439-440) (Vercelli, 37-38) 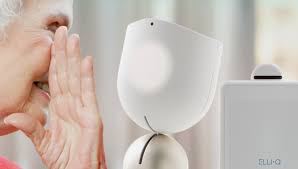 Meet ElliQ, the social robot aimed at “keeping older adults active & engaged.” (“ELLI Q”) Founded in 2016 Israel, Intuition Robotics is putting artificial intelligence and intuitive interaction models to the test in order to provide clients with an “aging companion” (“ELLI Q”) that will help them reap the benefits of modern technology in order to stay healthy and connected with their loved ones.

This robotic companion employs a combination of computer vision and machine learning in order to render the robot “a fully autonomous agent” (“Dor Skuler – CEO – Intuition Robotics”) capable of independent decision-making tailored to the personality of its client. Consequently, Elli.Q can provide for a wide range of services, from wellness and environmental monitoring to entertainment and proactive suggestion-making. As an example, Elli.Q reminds its patrons to take a walk on a sunny day, or guides them through their social media accounts. Elli.Q can even help families schedule check-ins with their elder members. Even though the product is still being tested, as of 2018, Intuition Robotics has amassed more than $20 million in venture funding. Toyota AI Ventures has been the most recent contributor to this project with $14 million investment. (Bharadwaj)

The developers of Elli.Q have received multiple awards and wide coverage from the press. (“ELLI Q”) Journalists repeatedly point out the elderly-friendly, interactive design of the product (Hartmans)(Bercovici)(Sawers), its capacity to act independently of any prompts (Hartmans), and its unique approach to interactivity through “voice-first technology” (Rieland) (Bercovici) and “body language.” (Rieland) Yet, many of these articles also -sometimes more tentatively, sometimes less so- touch on the social role that Elli.Q can have in an older person’s life. Louise Bartolotta, writes on Mashable that Elli.Q can be “a great friend.” (Bartolotta) Matt Simon draws connections to Westworld to question the moral entanglements of imbuing A.I. with agency. (Simon) Then, on Next Avenue, Rieland resolves that Elli.Q is “meant to be a service bot, not a companion.” (Rieland)

Simultaneously, research on assistive robotic technology warns about the potential of elderly robotics to reduce human contact through the limited need for social interactions with external agents for daily requirements. (Sharkey 29) (Vercelli, 37-40) Additionally, the European Civil Law Rules in Robotics expresses the same concern and establishes that the robot “may not substitute humans entirely,” (“The European Civil Law Rules in Robotics” 24) suggesting even to place a time-limit for interactions with the robot.

The CEO of the company, Dor Skuler, emphasizes in an interview with the Future Tech podcast that the company has explicitly avoided a “humanoid design” and has instead implemented a “robotic voice” (“Dor Skuler – CEO – Intuition Robotics”) for Elli.Q. In a different interview he adds, “I don’t think we want to live in a world where AIs pretend to be human” (Simon) Yet, in a segment of the interview where he details the experiences of Beta-testers, Skuler delights in the fact that subjects unanimously refer to Elli.Q as a “she.” (“Dor Skuler – CEO – Intuition Robotics”) He is more hesitant to admit that some of the subjects missed Elli.Q when she was taken away from their homes for maintenance. On that same note, the official website of the product playfully encourages you to “Stay friends with Elli.Q” (“ELLI Q”) and eagerly presents you with quotes from Beta-testers, who developed emotional bonds with the product.

Dor Skuler laments that Elli.Q “can do first order of context relatively well” but is “not really intelligent yet.” (“Dor Skuler – CEO – Intuition Robotics) There is an intention to move toward an ‘intelligent design’ expressed alongside concerns about the misnomation of artificial intelligence as a replacement for a human companion in Skuler’s interview. This cognitive dissonance permeating the interview can be viewed as a representation of the cloudy territory in which the public awaits the launch of Elli.Q into the open market. Will Elli.Q be on your wishlist?

Frangoul, Anmar. “Artificial Intelligence Is Helping to Transform the Way Elderly People Are Cared for .” CNBC, CNBC, 3 May 2018, www.cnbc.com/2018/05/03/ai-helping-to-transforming-elderly-health-care.html.

Greulich-Smith, Tamsin. “Can Artificial Intelligence Care for the Elderly?” GovInsider, 2 May 2018, govinsider.asia/innovation/artificial-intelligence-ageing-population/.