Substack: Against the advertising model


When you wake up and scroll through Facebook you inevitably scroll past advertisements. The morning paper in the mailbox has an ad on the front page. On your way to the train station, listening to your favorite podcast, you will hear an ad recorded by the host. At the station you will see advertising pillars, and with sensors they might see you as well (Sondermeijer). And even in the train, there is now advertising (Ammelrooy). Advertisements seem to be everywhere we go. Everywhere? 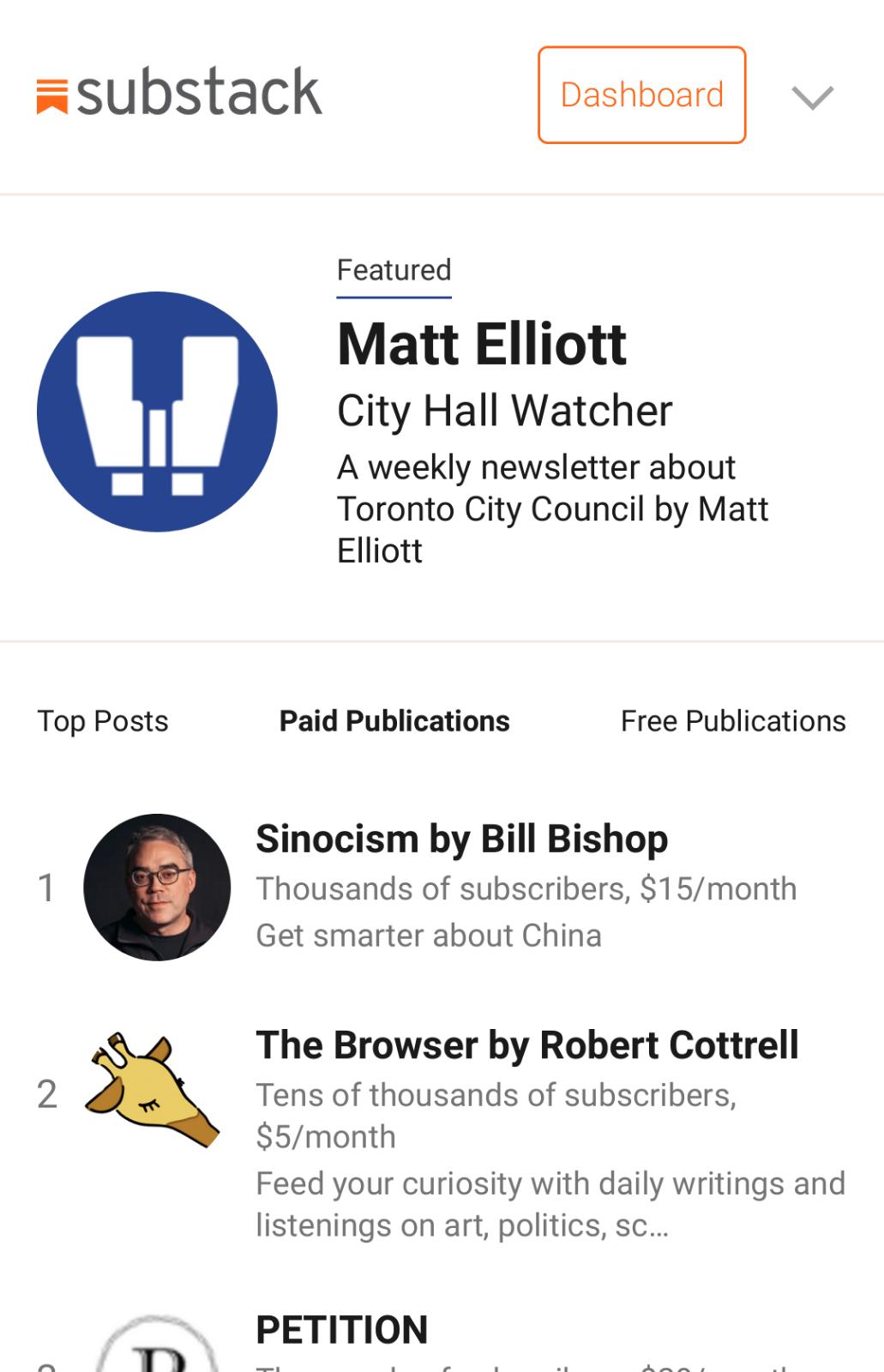 In this crazy world filled with advertisements, there is an oasis of peace; Substack. Substack is a newsletter service founded in 2017, with subscriptions as their way of monetization. Their website is minimalistic, a white page with one featured newsletter, a list of trending newsletter issues and at the top the option to publish yourself. But it’s actually more than just a newsletter service, co-founder Hamish McKenzie calls it a platform for a “personal media platform” (Rose). It’s a platform because the newsletter also functions as a blog and it’s possible to host discussion threads and distribute podcasts through Substack.

While the goal is to monetize through paid subscriptions, that doesn’t mean all newsletters and posts are paid. There are completely free newsletters, like BERN NOTICE by a Sanders campaign staffer, or the recently started HEATED about climate change. But the paid newsletters usually have a public post to attract new (paid) followers. Among the top paid publications there is Sinocism about China with thousands of subscribers ($15/month), or The Brower with tens of thousands of subscribers ($5/month) which features articles chosen by the editors.

Substack is not alone in this trend moving away from advertising to subscription models. Most notably is Patreon, where content creators can create subscriptions for their fans and give them exclusive content. Youtube now offers a subscription, to move away a bit from the advertising model (Shaul). Medium, after unsuccessfully trying to become profitable with advertising, changed to subscriptions. And Netflix, which has always used subscriptions, tested advertisements (for other shows), but faced backlash and stopped.

Unless you work in advertisement, you probably hate advertising. It’s no wonder that the number of ad blockers is growing (Guttman). The benefit of having a service with advertising is that it is either free or cheaper than it would have been otherwise. But if it’s free, you are probably the product. And when you are the product, your satisfaction isn’t their most important goal. And in the case of advertising, a service wants your attention (for which of course it needs some customer satisfaction). Most internet users say that ads have become more intrusive in the past few years (Mohr). Not only are advertisements annoying, they also slow down the website (Claburn).

Targeted ads have become increasingly present around the internet. Companies like Facebook claim that they show personalized ads so that they are more relevant for you, but they, more importantly, do it to earn more money. But to target ads, companies need to acquire a lot of data, which raises privacy concerns. This was of course most visible with the Facebook-Cambridge Analytica scandal last year. But targeted advertising also leads to a lower self-determination, because users are more and more influenced by the ads they are served (Hamilton) . And this influence is not only limited to consumer behavior, but also influences the political life (Zuiderveen), for example by promoting Fake News.

And while this is annoying for users and concerning for society, advertising also has an impact on content creators, and their content. Their revenue declines because of ad blocker (Shaul), and have to do more for your (advertisable) attention. Due to changes in the Youtube algorithm for example, users are encouraged to make videos longer than ten minutes to get more ad revenue (Peterson). In a lot of cases this is not in the best interest of the quality of the content, and is especially problematic for Youtubers who make shorter videos. It also might force content creators to incorporate native advertising into their content, which users often not recognize as being advertising (Evans). When it’s not stated that it is sponsored by a third party, a content creator in a way deceives the user. But even if it is stated, it might lower the trust and credibility of the content creator (Hardy).

Substack is really useful for content creators when they already have a following, but getting there is more challenging, which Substack CEO Christ Best admits (Johnson). Substack helps a little with search engine optimization (although it lacks a search bar on its own website). Because paid newsletters can also post public posts, there is the ability to share a post on Twitter and Facebook, but this still relies on other social media platforms with ad models. Chris Best even suggests to use paid advertising on other platforms to promote a paid newsletter (Johnson). And this is not limited to just Substack, Patreon for example also encourages the use of social media to promote content. And somewhat ironic, while Substack agitates against ad models, it reserves the right in their privacy policy to share personal information with third parties, including “Advertisers”.

The advertising models have a lot of negative effects on society, users and content creators. Substack like many others tries to move the Internet away from these advertising models towards subscription models. This is however difficult, because many people prefer free content, or at least the content creators rely on platforms with advertising to promote their content. And while Substack raised milions in funding last year, it still nothing compared to platforms like Facebook. But while a breakthrough might still be far away, I will be enjoying my ad-free newsletters in the morning, amidst all the noise around me.

Fischer, Will. ‘Ad models break everyone’s brains’: How Patreon and Substack are trying to make the internet a better place with membership and subscriptions. 11 Augustus 2019. Web. 21 September 2019. <https://www.businessinsider.nl/subscription-platforms-patreon-substack-quality-alternative-to-social-media-2019-8>.