Does Wikipedia bore you: from Visual Flaw to Limitation

Wikipedia is widely known as an online text dictionary. At the same time visuals are hardly used. Since it has been founded in 2001, not much has changed in the appearance of the pages.

The editors are generally well schooled and used the same way of defining their entries. I rather call them ‘text/code readers’. They generate the major contents on Wikipedia with textual information with little visual support. On one hand they contribute expertise on the WWW, on the other hand this knowledge amounts to a lack of visibly attractive elements to the big population of the Internet users.

There are about 740,000 Wikipedist globally [1], and more than 300,000,000 active users on Facebook [2]. The number shows the popularity of two revolutionary web 2.0 sites obviously, but what is the key factor for the numerical difference between Wiki and Facebook?

As we commonly reckon, the unique advantages of digital platform are not only instant deliver, widespread and interaction, but also multi-media. What make Internet far more appealing than textbook? Easy approach to endless information in various formats: text, image, sound, flash and video. You may easily get bored of the 20-page essay, but you can hardly leave Myspace with countless videos from all over the world. Here we are not just talking about the visually attracted teenagers, we also refer to adults. One Facebook user analysis reveals that the percentage of elder-age groups between 25-34 and above 35 is increasing by year. [3] Maybe this is not convincing enough for Facebook’s core function as social network, let us see YouTube. The age of an average YouTuber is 27, with 20% being 35 or older. By the way, Nielsen NetRatings suggested that one-third of YouTube’s audience is over 45. [4]

Yes, Picture Era is now. From what I know, Navify, branded itself as multimedia encyclopedia has already launched [5]. Though Wikipedia is now publishing its beta version, which offers relatively more modern interface, it is far from engaging the rest of the world to join the wonderful journey of sharism. Is Wikipedia forcefully going against the trend? They seem to have reason to go. 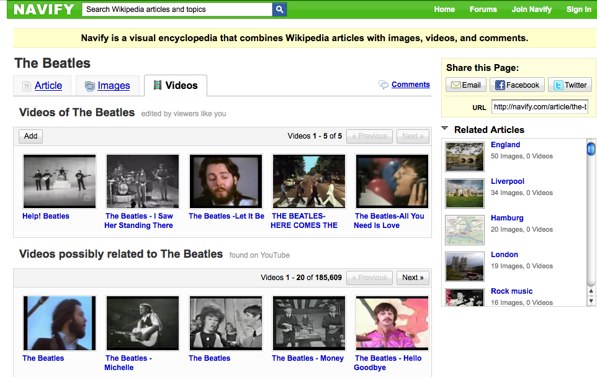 -Legality. Wikipedia greatly respects copyrights. As it clarifies “do not quote more than a couple of sentences of text from anywhere, and document any references you do use. You can copy material that you are sure is in the public domain, but even for public domain material you should still document your source.” [6] It works for text easier than images or videos. Because visuals are external and independent, even you are the drawer of your illustration you can’t assume everyone knows but to prove the external visual attachment is under your copyright, since all self-published work must have been licensed by their creators before they are uploaded. What is more, legal issues are complex. Image copyright laws vary from country to country.

-Technique. Needless to say that for common users, to type some words is much more approachable than to draw a picture by computer. Creating an image or a video requires certain skills, tools, and of course, time and efforts. ‘The following elements affect image contribution: 1. Equipment, 2. Image storage, 3. Image reusability, and 4. Image editing.” [7]

-Source. There are mainly two sources for visual references: self-published and public domain sources. As noted above, for publishing, some skill is required. Public domain is normally the first choice. Scanning from public readings is also allowed. However, it is largely inconvenient to double-check the validity of each reference you shall use for editing Wikipedia. The consumption of knowledge, time and energy on the proof of source becomes a barrier for a good number of grassroot users.

However, Wikipedia is not the only website confronting these problems. Besides objective causes, Wikipedia itself also has its responsibilities on the present status. With the academic look and feel of their module and organizational structure, Wikipedia intends to prevent from the so-called amateurs to participate. Meanwhile, from the homepage to the user pages there is nothing to catch the attention of a 13-year-old kid. Their text-oriented interface compared with any other well-known web 2.0 network is with no doubt not user-friendly. The lack of delicate consideration of design and layout increases the irritation of over-load information.

Before we name Wikipedia the symbol of user-generated knowledge and icon of new democracy, we’d better think twice. There are still a lot of limitation and questions in Wikipedia. To see it positively, there is big space to improve for this international encyclopaedia to really become universal, meaning to cross culture, age, intelligence, etc. Possible solutions are discussed below.

-Set up association with the main video and image provider. In terms of video, Youtube for international, Hulu for America, Youku for China, etc. For images, websites like Flickr can provide wealth of photograph source and Ffffound with continuous updates of high quality work by illustrators/designers. Legal issues can therefore be carried by multiple communities and the ability for Wikipedia to deal with copyrights will then be strengthened.

-Visual database should be constructed on a global level under the management of Wikipedia. Users with visual creating capability or legal access to existing visual resource can contribute their collections for the free use of any Wikipedist.

-Interface of Wikipedia should be designed with stronger graphic support and for the benefits of users, a bit fun and creativity. Also there is an intensive ignorance of contributors’ characteristics. If there can be slightly more freedom to present the users’ individuality, Wikipedia should to able to draw interests to wider potential members.

The endeavor to make Wikipedia a better-visualized platform is so far very little notable. It claims great professional knowledge on visual communication, legality, technology, psychology, etc, and not to forget: passion. It is worthy to believe that Wikipedia can become as tempting as those mass popular networks.

8 Responses to “Does Wikipedia bore you: from Visual Flaw to Limitation”
Leave a Reply
This blog is protected by Dave's Spam Karma 2: 2705362 Spams eaten and counting...