Does the Flickr ‘style’ manifest a longing for a non-technological authenticity?

Photography on Flickr is clearly tied into the overall tradition of vernacular or amateur photography.  Where the introduction of the Kodak-Eastman camera in 1888 brought the means to create photographs to a huge segment of the population, the internet gave a huge segment of the population the ability to market their photographs.  The availability of digital cameras has made the creation of individual images, for practical purposes, free and unlimited, while software such as Photoshop has opened up production techniques previously accessible only to those with access to professional studios.  So, while the majority of Flickr users are by definition amateur photographers, their experience is quantitively different from that of past hobbyists.  One of the most notable aspects of this experience is the ability to achieve a fame or widespread recognition that can be uniquely characterized as:

3. A function of social influence within the site

4. A function of prevailing artistic trends within the site 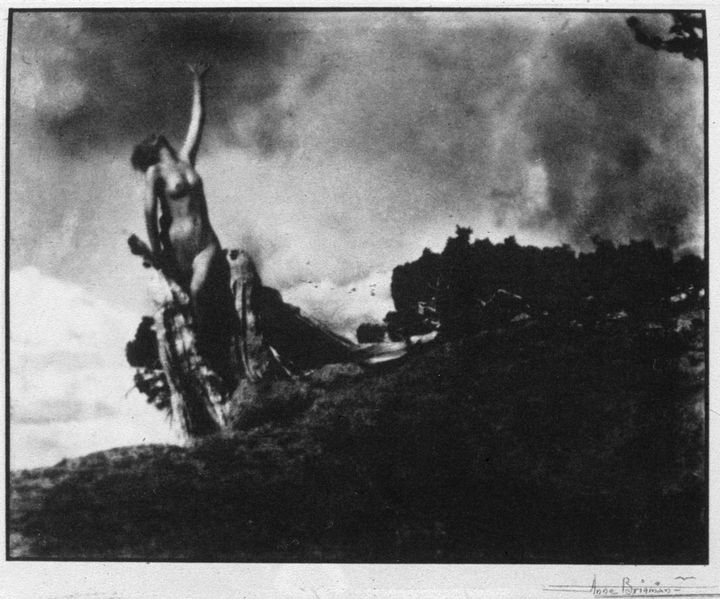 Anne Brigman's Soul of the Blasted Pine. What distinguishes early amateur photography from that found on Flickr?

It is the ascendency of such trends that I find particularly intriguing.  These trends, as discussed in this 2008 New York Times article, are characterized both by extensive pre- and post-production alterations.  In the article, a blogger “conceded that intense postproduction processing is necessary for popularity on the site” (Hefferrnan 208).  Some photographs, such as those by the member Merkley???, are so heavily staged so as to resemble theatrical sets.  Other popular members use High Dynamic Range Imaging (HDR), which merges multiple images to create a greater range of luminescences, resulting in exaggerated contrasts and colors.

A trip through the 100 Club, a Flickr group for photos that have received more than 100 ‘favorites,’ also reveals the site’s preferred choice of subject matter:  Flowers, peaceful landscapes, birds, and attractive women.  Of course, other people define the range of users on Flickr in more derogatory terms: “ 1. The amateur fashion shooter. 2. The celebrity portraiture copycat. 3. The hipster snapshot diarist.  4. The stock image reject” (Soth 2007)” and so on.

A more scientific method of examining ‘special’ Flickr member is utilized by Negoescu 2007, where an overview of these central users also confirms the primacy of the above stylistic characteristics.  In other words, popular users have by-and-large co-opted digital methods to produce images that are seen as more natural, authentic, or individualistic. An example of the Flickr style: Extra Super Cutie's There are Just as Many Ways

Given the above characteristics, I would be interested in researching whether or not the social space of Flickr has enabled the development of a worthwhile photographic vernacular.  In particular, I am interested in the degree to which  the emphasis on post-production indicates a conscious rejection of the digital camera as a generic technology.  How is this different from the early manipulations of photographers such as Anne Brigman, who sought to treat photography as a painterly medium?  It may be that this manipulation along with a strong interest in subjects such as wildlife and landscapes represents a longing for the ‘natural,’ for an retreat into a more authentic and individualized artistic area within the digital realm. Just as Facebook can manifest a longing for social connectivity denied by day-to-day life, the popularity of certain Flickr images may manifest a biophilic longing for environmental beauty or simple unexpectedness that is sorely lacking from modern existence.  On the other hand, it is also entirely possible that photographic popularity on Flickr is mediated by the junk-food mentality; motivated primarily by ease of consumption and commercial promptings, as argued by Cox 2007. 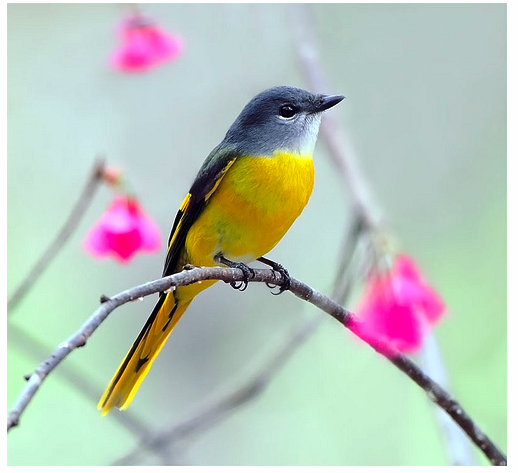 Birds, flowers, and saturated colors characterize many of the images within the 100 Club. Gray-Chinned Minivet by member John&Fish

Soth, A. (2007) Where are the great pictures on Flickr? [online] Available at