Darkness has fallen over the Bodon Chambers. Only slim light shimmers over a pool of water onto a massive wall, creating a Virtual Space of light and movement. The Icelandic artist Olafur Eliasson created Notion Motion: a visualization of light waves. This space is not digital nor exactly analogue. It’s a grey area. But how close does this projection get to Virtual Reality, as we know it? Even without the use of a computer it seems to be closer than one might think.

Notion Motion consists of three key elements: water, light and… you. The light reflecting on the water creates a fictitious world. Interactivity is the key to this art project. Just like most online media active participation is necessary. You can influence the conditions of the medium by creating waves in the water. The projected world will change, just like its inhabitants. You will change. Not only your perception of this world, but also the world’s perception on you. 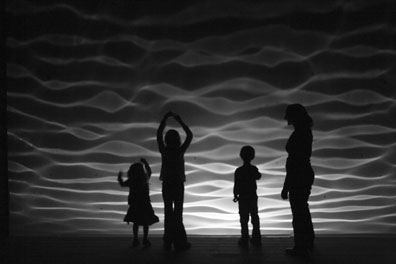 It is a place where your  identities are shadows, anonymous, just a blob in a world of flickering light. When you first enter the room you’re overwhelmed with peace. You feel relaxed. It seems to be a dream world. But nothing is what it seems. People are actively reacting on what they see on the wall. In this sense it’s like Plato’s cave. The only difference is that there is no invisible audience. We rather choose to communicate with our avatar, our untouchable selves. Just like in the digital world, were people create identities, which substitute their real selves. But why is this what we do? Is interacting with ones shadow safer, than with his owner?

Virtual reality is said to create new worlds among existing ones. This is exactly what Eliasson does. With Notion Motion he creates a new space. It is very minimalistic and simple, but it is here. This is made visible through the continue interaction between the three key elements. Virtuality is absorbed within the textures of everyday life. (Shaviro, 2007:6) This is what is shown in the Bodon chambers. Shadows a meeting each other on the 1500m2 big screen. Continue changing, reacting to one another. 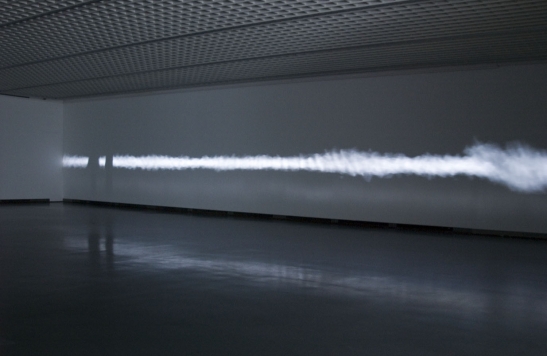 If you’re interested in conducting an experiment, step into to the world of Notion Motion. See the shadows on the wall in de Bodon chamber. Interact with them and see what others do. Be quick. This virtual world might not be there for long. It sure made me think of the different kind of virtual spaces this world contains and what kind of effects they have on human behavior.

However, this visualization isn’t a part of the digital world, but it gives a slight impression of what it would be like. You can inhabit this virtual space for a moment and interact with its environment. The lights enchanted me, made me see a connection to the virtual world. These lights are brainwaves, my brainwaves, spinning out of control. It’s a Spirographic world, Plato’s cave of the future.

Notion Motion is specially created for the Boijmans van Beuningen Museum in Rotterdam. If you get the chance, check it out.