Book Review: Crowdsourcing, How the Power of the Crowd is Driving the Future of Business by Jeff Howe.

What do YouTube, Wikipedia, IMDB, Tripadvisor, Linux, iStockphoto and Firefox all have in common? They exist through the collective efforts of millions of ordinary users like you and me. The strategy behind the success of these websites is crowdsourcing: “the act of taking a job traditionally performed by employees and outsourcing it to an undefined, generally large group of people in the form of an open call”. The crowd in this definition is you, me and the rest of the billion people that currently have access to the internet and sourcing it – by tapping into the unlimited knowledge and creative potential of the crowd – is the new way to go according to WIRED-editor Jeff Howe in his book ‘Crowdsourcing – How the Power of the Crowd is Driving the Future of Business’.

For a brief introduction to the concept of crowdsourcing see Jeff Howe’s video below.

The success of crowdsourcing derives from the current shift in the balance between producers and consumers of media caused by the Internet: through web 2.0 applications the once passive media consumer is increasingly producing media content. This storm of user-generated-content has resulted in the term ‘produsers’, a wordplay that illustrates the new role consumers occupy in actively forming online communities around interests and creating content. By offering solutions to problems, putting ideas forward, creating content, ranking and distributing it the crowd is showing the willingness to selflessly engage in the production of this information. In doing so the crowd is guiding companies to the holy grail of marketing: knowing what the public actually wants.

As with many booming internet phenomena the idea behind crowdsourcing isn’t new in the truest meaning of the word. A great example of sourcing a large group of divers people to find a solution for a certain problem can be found in the true story of the 1714′ longitude price. At the time the Royal Navy of Britain was in desperate need of a solution to determine the longitude on a ship since the absence of which was leading to countless ships-loss. After the top scholars, including Isaac Newton, had tried but failed, the Royal Navy decided to crowdsource the problem: it promised 20,000 pound of price money (12 million dollars today) to the person who could invent such a devise. The solution, a clock with suberb accurancy, was put forward by the most unlikely person: an uneducated cabinetmaker from Yorkshire. What this story signifies is that, with enough (diverse) minds trying to solve a problem, the chance of coming up with a solution radically increases and the solution could come from the most unlikely places.

But how was crowdsourcing able to take such a flight? In the section ‘How we got here’ Howe points at two interesting forces at play that created a fertile ground for crowdsourcing to flourish. Firstly there’s the sociological development Howe calls the ‘rise of the amateur’: the rise of a highly skilled and diversely talented workforce that, in a labor market where industrialization led to increased levels of specialization, feels increasingly overeducated and underfulfilled by their current jobs. In reaction to this the workforce turns to find more meaningful work outside of the confines of their profession, resulting in amateurs happily contributing, disagreeing or even outright outperforming professionals in any topics they’re interested in – be it a photo-sharing-site or an unsolved scientific problem. As more people in today’s information economy are highly and broadly educated, the possibility of competing with professionals within a certain field of interest becomes likelier. This development created an environment wherein Crowdsourcing could “capitalize on the fact that our interests are more diverse than our business cards would have one believe.” Howes even goes as far as stating that “a large number of people are performing their most meaningful, rewarding labor away from the workplace”. Whether one agrees with that statement or not, it is clear that any person in this post-modern age is more than just their job – and they have the brains, creativity and highly divers interests to prove it. 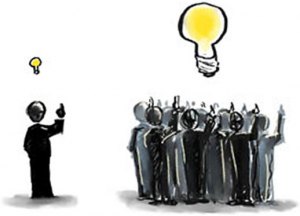 Though this rise of the amateur isn’t a particularly new development it has relatively recently however coincided with the rise of the greatest knowledge distribution mechanism ever: the Internet. It’s this combination of the two that brought us the successful examples of crowdsourcing projects we know today. The rise of the Internet has provided the crowd with important means for cooperation. Firstly, the availability of cheap electronic products and tools (think Adobe’s Photoshop in combination of an affordable high-resolution camera) lowered the bar between amateur and professional. Secondly, open source software gave the crowd a practical system in which collaborating and forming communities with a large number of people became possible. The open source software movement, that for example created the Linux operating system, provided both a blueprint and an incentive for any to-be crowdsourcing projects. It proved that – when broken into small enough pieces of work – crowds were able to produce highly sophisticated and effective systems and products. The internet and the network it created have enabled us to cooperate in the most ambitious projects known to man:

“It is the rise of the network that allows us to exploit a fact of human labor that long predates the Internet: the ability to divvy up an overwhelming task – such as the writing of an exhaustive encyclopedia – into small enough chunks that completing it becomes not only feasible, but fun.” (p. 11, 2008) 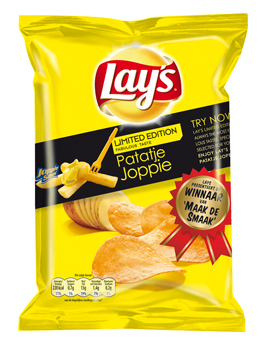 In the second part of the book – Where we are – Howe turns to the present day situation wherein companies, non-profit-organizations and even governments are increasingly starting to acknowledge the power of the crowd and putting it to use. With a Malcolm Gladwell-like enthusiasm and similar amounts of practical examples the author offers a comprehensive overview of how this relatively new phenomenon has come to change anything from the way we do business to the way we entertain ourselves. A fun example of how companies could use the power of the crowd is the “Bepaal de Smaak”-campaign Lays recently ran in the Netherlands. People were asked what they thought should be the new flavor of chips produced by the company. Within a matter of months a stunning 675.000 ideas were put forward, the winner of which (the infamous ‘Patatje Joppie’-chips) hit Dutch stores in 2011.

It is in this section of the book however, in which the author repeatedly uses the same examples to make arguably the same point, that Howe starts losing his reader. The 2006 WIRED-article written by Howe that precedes this book offers much of the conclusions this book provides. The lack of analytical insight and the fact that most examples will sound familiar to most up-to-date readers therefor results in a book that has made its point in the first 100 pages. Ironically the strength of the book that lies in the numerous examples of crowdsourcing is in that sense also it’s greatest weakness. When you’re new to this interesting development – like I was – the book is still highly engaging and readable and I therefor still encourage anyone interested to read it. It’s important however to view this book as a popular scientific read that offers more of a journalistic than academic approach to the development.