In the year 2013, six hundred seventy-two million people used a mobile phone in Europe. And this number is on the rise. In the Netherlands alone, twenty million mobile phones were used by the end of 2013.

Mobile phones are actively using pulsed high-frequency electromagnetic field (PEMF). These electromagnetic waves are radioactive and some researchers have discovered that these waves can affect the human organism, in particular, the brain. 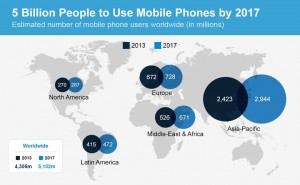 These waves are analog, and phones are capable to decode messages sent to them. Because of the use of analog frequencies, all the messages are exposed to outside sources, mostly noises. Media technology is disrupted by noises and that is the reason why we do not want them to get in the way. Matthew Reynolds saw these noises as opportunity.

M. S. Reynolds is a researcher at the University of Washington and with his team he managed to affect mobile phone operations without touching the device. He discovered that mobile phones can be manipulated by corrupting the high-frequency field that mobile phones use to connect with an operator. The team of five researchers invented an in-air gestures detecting device called SideSwipe. This technology opens a new perspective on working with modern technology.

We are not limited “to physical buttons, touch screens, cameras or built-in sensors,” said Reynolds for NewScientist. For operations of SideSwipe no other extension is needed. A cellular is already using field of electromagnetic waves to function; to call, to send SMS and to connect to internet. This is only an upgrade of user experience.

“Specifically, when the hand moves around the phone, the reflected GSM signal is amplitude-modulated as a result of induced multipath propagation. Our system captures such variations from the reflected GSM pulses and uses them to extract hand gestures.” (Zhao et al.)

Their chip modulates frequencies round the device. The first robust version recognises fourteen different gestures that work with 87 per cent accuracy. With these gestures we are able to have a touchless control of the device. All mobile phones are working in this frequency range and that means that SideSwip is not limited to be used on smart phones only. This figure can also be used on less advanced phones as an upgrade to their features. SideSwip will be first publicly presented at a User interfaced conference in Hawai in October.

“It comprises an algorithm that recognises the unique reflections created when fingers interrupt a burst of the radio waves that send information between your phone and the cellphone mast.” (New Scientist)

Controlling the radio waves with gestures reminds us of an old invention made by a Russian engineer and physicist Lev Sergeyevich Termen. His invention was etherphone, better known by the name of theremin. Theremin is limited on low radio frequencies, within the range of approximately 73kHz, but that is not the case with mobile phones. Low-range frequencies cannot affect a human being in the matter of health, while mobile phones are using ultra high radio frequencies, ranging from 800MHz up to 2500MHz that can.

How good this upgrade of mobile phone interaction with the user is, can be a matter of question. On one hand we can say that this invention is going to help users: long range interaction with device, touchless features, etc. Even from the health perspective we could say that by distancing ourselves away from the device we could save ourselves a bit of health. On the other hand, we can assume that by modulating the mobile frequency we are going to be even more exposed to it. These effects are going to be known in the time or with an experimental research.