A true astronaut of inner space: how your phone is making Virtual Reality a reality


“Looking like a cross between a T’ai Chi master, a navy frogman, and the Terminator, a man harnessed to electronic leads and fitted with a strange piece of headgear slowly turns and gestures. The pointing hand and the ballet of sign language, combined with an air of intense concentration, give the unmistakable impression that the person is far, far away from the brightly lit San Francisco Bay area laboratory in which he stands. You might almost say that he seems as if he were in another world. And you would be right. Before you stands a true astronaut of inner space, a researcher who is in the processes of going where few have gone before. But look quickly-what is today the visionary dream of the techie few will very soon be reality for the rest of us. Virtual reality, that is” (McKenna).

With these inspiring words Terence McKenna introduces the readers of his article ‘Virtual Reality and Electronic Highs’ to his first experience with virtual reality more than two decades ago. Back when the internet was the ‘next big thing’ virtual reality (VR) was still a technology under development by NASA and other private companies in the San Francisco Bay area. Even though Helmet-mounted displays, power gloves, 3D sights and sounds were supposed to deliver an immersive experience, Stephen Ellis, who leads the Advanced Displays and Spatial Perception Laboratory at NASA’s Ames Research Center explains that “The technology of the 1980s was not mature enough” for the public. VR helmets and their optics were just too heavy. Computers were too slow. Touch-feedback systems often didn’t work, and the only thing consistently real about VR were headaches and motion sickness (NASA).

Fast forward to 2015 and McKenna’s interpretative ‘’very soon be reality for the rest of us” is on the brink of becoming the next big thing since the internet, well, at least for yours truly that is. My first encounter with VR was at an Oculus VR booth at Gamescom in 2013 where I played a variety of tech demo’s and was soon to be kindly requested to ‘give others a chance to experience the wonders of VR’ to. Although this first experience got me more excited about VR than ever before, I couldn’t help but wonder if the hardware was just as ‘ready’ as I was. 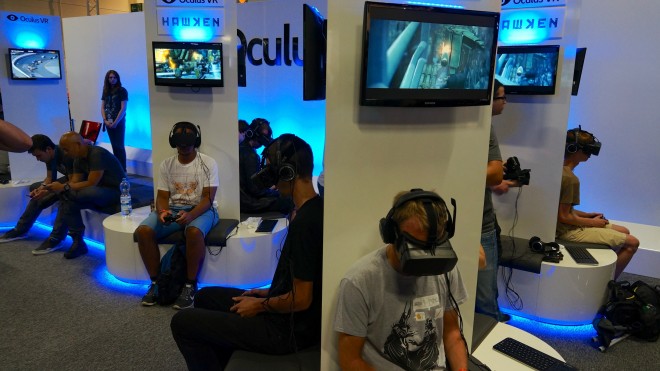 Although less of a contraption than McKenna describes, the first Oculus Rift developer kit I got strapped on to back in 2013 was part of an extensive network of cables and a seemingly hefty computer rig. Even with this amount of technology available on stage, the display technology used in the first Oculus Rift developer kit was of such low quality, that my mind was constantly trying to figure out what it was looking at instead of focusing on the game that I was playing. With the introduction of the second gen Oculus Rift in 2015 this problem should apparently have been solved. Instead of using custom made displays, the second gen Oculus Rift is using the screen from Samsung’s smartphone the Galaxy Note 3. And mind you, not a similar screen, no the exact same screen, with touch module and connectors still attached inside the casing of the Oculus Rift (Engadget).

VR headsets can still be considered as peripherals in an emergent market and companies that develop them do often not yet have the personal expertise or resources to design all the necessary components indoor. Therefore, they turned to the smartphone market. Current generation VR headsets make use of a wide variety of phone components such as displays, gyroscopes, cameras and proximity sensors, to just name a few (Wired). The earlier mentioned Galaxy Note 3, used in the Oculus Rift 2 developer kit, is retailed for around € 600. Oculus CEO Brendan Iribe just recently gave his approximate figures for how much the total system will set you back at launch. Users will be paying around €1,500 to get the full Rift experience. However, that price does include the purchase of a high-end computer, costing roughly around €1,000 – leaving the cost of the headset at around €500. 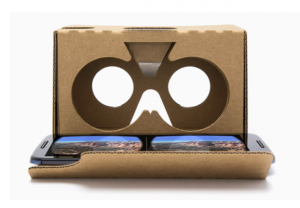 Even though a lot of early adopters, like myself (although I already own a high-end computer), are more than willing to pay this exceptionally high price for the VR headsets. It is likely that a big number of people are not ready to empty their wallets just yet. However, with the recent launch of Google cardboard just over a year ago, everybody can, according to Google, enjoy the wondrous world of VR. Google Cardboard consists of a, you guessed it, cardboard casing with a simple viewer that anyone can build or buy. Once you have it, you can explore a variety of apps from the Google Play marketplace. In contrast ”It’s taken Oculus two years and counting to go from duct-tape prototype to commercial product; while Google shipped more than 500,000 Cardboard units in about half that time.”(Wired). And since Google is not the only one to make VR casings (Wired), take for instance the much more extensive Samsung Gear VR in the video below, smartphone VR brings the hardware to the public.

But the hardware is not the only thing playing an important role in the distribution of VR to the public. Software may even play a bigger part. Just recently a discussion emerged in a popular Reddit thread about the openness of VR headsets like the Oculus Rift and HTC’s Vive. The implication of the post seemed to be that Oculus is working to lock games away from compatibility with competing VR platforms and that Oculus might end up closing off the entire platform itself from unauthorized software. Oculus founder Palmer Luckey replied that “The Rift is an open platform, not a closed one,”(Arstechnica). However, developing for the Oculus Rift or HTC Vive means that you need to have one of the developer headsets, which unfortunately are very expensive. Mobile phones on the other hand are already owned by ‘practically’ everyone. And according to the Guardian, mobile game revenue is going to overtake that of consoles this year.

With the help of hard- and especially software developers creating cheap and exciting content for mobile phones, VR seems to be here to stay (Mashable). And if you happen to look in why you walk by a VR users’ home, let’s hope it is as McKenna described it so long ago, “you might almost say that he seems as if he were in another world”.

McKenna, Terence. ‘Virtual Reality and Electronic Highs. The Archaic Revival: Speculations on Psychedelic Mushrooms, the Amazon, Virtual Reality, UFOs, Evolution, Shamanism, the Rebirth of the Goddess, and the End of History’, New York, US, Harper Collins: 228-236 (1991).