One Man’s Trash, Another Man’s Treasure: The Fate of Our Deleted Data on Web 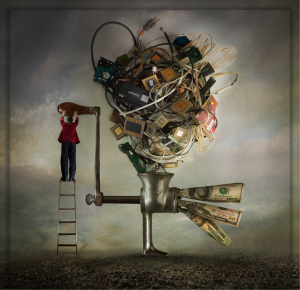 A madman is on the loose with a single aim of making all your deleted files re-appear on the web. Some of which are lame status updates that seemed cool back then, but some, graver. Flirtatious texts to someone other than your partner, pictures of a party with drugs on the table, Google searches that make it look like you are making a bomb. All of this and much more!

After moving on, growing up, getting out of your phase, you deleted that stuff- some immediately, some later. Above all- it is in the abyss …..But is it?

Deleting information should fundamentally put it out of its existence. It may stay with you in your memory but it is deleted from the medium it existed on. However, in many cases, the information on the web ‘reappears’ demonstrating that it was never deleted in the first place. Google’s Eric Schmidt has admitted to the “lack of a delete button on the Internet as a significant issue,” thereby hinting to disillusion us.

‘Down the Rabbit Hole’

You shape your web trajectory by doing all the things you wish but only keeping those that most agree with your current state of mind. Be it deleting the specific website from the browsing history, your credit card information from a site you no longer use or your comment about religion on a blog post. The Web, however, is not an easy place to manoeuvre. Information exists on multiple levels, diverse platforms and across devices. A photo may simultaneously be on my SD card, hard drive, Facebook, iPhoto, email, iCloud and other places I have sent it to. Getting rid of it requires a tedious process of accessing each of these mediums and maybe even then, the spirit of my data will exist somewhere on the web and be back to haunt me.

The anxieties arising from the fate of our deleted data led people to run experiments wherein they deleted their information from Facebook only to see it return in a few days. Facebook’s privacy policy claims that our deleted content may persist in backup copies for a “reasonable” period of time (but will not be available to others). The ambiguity of what is a ‘reasonable period of time’ is evident and while it may not be available to others it is retained on Facebook. In addition to this, it also says “some of this information is permanently deleted from our servers; however, some things can only be deleted when you permanently delete your account.” Jose Mircheal in his book ‘Facebook Democracy‘ talks about how closing a Facebook account is itself a difficult and slow procedure. “Even if you are able to exit, the issue of your past Facebook life remains (53)

There is content that one volunteers to upload or download within their awareness, but the issue gets complicated when other parties enter into the domain with an access to that information. One no longer controls that which has been disseminated to countless other places and expanded over the web.

Companies such as Yahoo! Foursquare and Tumblr commit to deleting users data but elsewhere also state that the information may be available and accessible to others, even after deletion. Therefore, the potential of retaining users deleted data ‘indefinitely’ or for ‘reasonable’ amount of time, is extremely high on such platforms. Especially by third-party developers or advertisers, of which the users may or may not have any information (Gertwerth, Leenes and Hert, 50-51)

The survey done by the authors of ‘Reloading Data Protection’ highlights that privacy policy of companies engage in ‘quasi-forgetting’ where promises of erasure or deletion are hedged by a number of conditions relating to the timing of the deletion, the inability to guarantee the behavior of the third parties (including law enforcement) the need to retain for unspecified legal purposes, the technical complexities and the realities of data analytics” (Getwerth et al, 56)

Our knowledge of what happens to our data that we delete is limited, skillfully placed and jargonized in the terms and conditions we agree to. We might also like to believe that once we hit the delete button we are rid of the information we no longer wish to possess and this gives us a sense of security and prevents us probing further. We may also take the declarations of privacy and securities offered by web companies at face value and close the matter. After all, we did sign the agreement that mentioned access by third-party participators and advertisers.

‘Some Good Bets, Some Rights’

Turns out that people care about privacy as much or even more than their public actions. Above developments also gave rise to counter strategies that deal with the thorough deletion of data. Service and solution players stepped in and so did the law.

The ‘Blancco Data Eraser’ is one such solution provider that assists in data deletion. Its CEO, Kim Vaisanan quotes “Our clients don’t pay us for deletion-they pay us for verification.” Another company known as ‘DeleteMe’ charges its customers $10 for deleting an account and $50 for deleting search result. They do this by pointing out on companies’ own privacy policies and following up with legal orders in case the data is not removed. The threat of a legal action could be your saving grace in preventing the company from selling out your information (Carr, 53)

In 2010, a Spanish citizen filed a lawsuit against Google Spain over infringement of his privacy and asked the company to delete the information that appeared on the web in his name. This led to relook on the previous framework of EU’s 1995 Data Protection Directive and gave rise to ‘The Right to be Forgotten and to Erasure’. In 2014 the court in its press release of the case- Google Spain SL, Google Inc. v Agencia Española de Protección de Datos, Mario Costeja González stated ‘An internet search engine operator is responsible for the processing that it carries out of personal data which appear on web pages published by third parties’.  In the article 17 of the ruling of Right to Erasure, it further states that ‘The data subject shall have the right to obtain from the controller the erasure of personal data relating to them and the abstention from further dissemination of such data, and to obtain from third parties the erasure of any links to, or copy or replication of that data’

This kind of ruling reestablishes our principles and values on notions of privacy, democracy, free speech, and forgiveness. It is embedded in institutions of ‘globalisation’ and ‘instant communication’ (Brock, 2016).Many other countries are now exploring the implications of this law and deliberating over its legislation within new or existing frameworks.

Much like a few philosophies of religion, there seems to remain a bit of us even after our non-existence. Be it in the form of an aura, energy or now, binary codes. Most companies give us an indistinct destination of our deleted data and even when it does, it does not claim responsibility on the behalf of the third-party developers.In that case, the choice is to either give out information, accepting its permanence or approaching the law of your country regarding data privacy and protection.

Whichever the case may be, the noise around data privacy and data protection only seem to grow, bringing in new dimensions and challenges for us to explore. As Jones in her book Ctrl Z puts it, “before you delete your next Facebook post, tweet, blog, comment, email, set of cookies, or chat, consider whether you’re destroying history or exercising your power to participate in your digital identity”(193)

Brock, George. The right to be forgotten: privacy and the media in the digital age. London, I.B. Tauris, 2016.