I just read an article on Tweakers that Ipoque, a German company that sells ‘deep packet inspection-hardware’, has published a study on the distribution of protocol classes. This chart is a representation of their findings. 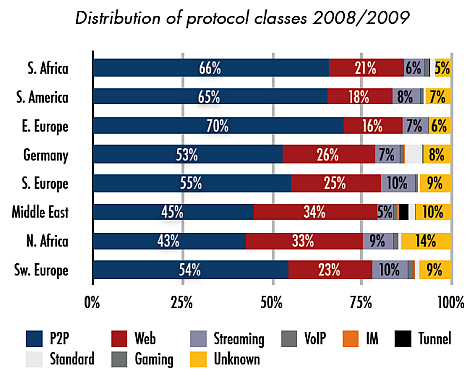 With the ‘deep packet inpection-hardware’ internet Providers can analyse internet traffic. This hardware also enables providers to regulate the traffic by providing the ability to filtering and prioritize certain protocols. As a result, P2P-traffic is declining. Be that as it may, more interesting to me is the fact that Tweakers mentions the decline of P2P over the ‘normal’ web traffic. I think we could better speak of P2P-traffic as being the norm because of its hegemony. Anyway, the regional coverage of the study has been extended to include eight regions of the world, namely: Australia, Eastern Europe, Germany, the Middle East and Southern Europe, Northern and Southern Africa, South America and Southern Europe. The data that has been analyzed is of one provider/region. The amount of users per region differs between 50.000 and 250.000.
Here are some of the key findings of the study summed up. (published by here):