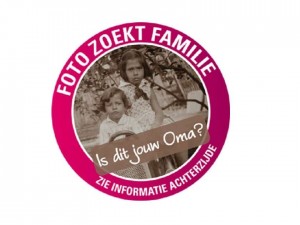 “Is dit jouw oma?” [“Is this your Grandmother?”] was the question that numerous shoppers were confronted with, when strolling down the aisles of Dutch supermarkets in search of Indonesian chips called emping in the early months of 2013. The question was framed by an old black and white photograph of two young girls in a tropical setting, the oldest of the two looking directly into to the camera, seemingly demanding an answer from the consumer that picked up one of the Go-Tan packages she was on.

The question was not just posed by a genealogist trying to reconstruct his family tree. Instead, the photograph was part of a campaign for a project called Foto zoekt familie.

Foto zoekt familie [Photograph in Search of Family] is a project developed by the Tropenmuseum and KIT Library and Information Services in the Netherlands. Its goal is to locate the owners or relatives of (previously) anonymous photo albums in their collection. With the help of the Dutch crowd funding platform Voordekunst.nl, €13.150 was raised to help digitalize the 335 albums and make them available online

All of these albums were  left in Indonesia in 1945-1949. During this period, Indonesia’s struggle for independence from their colonial oppressors reached a climax, causing thousands of Indonesians of Dutch  or mixed descent to flee their homes and travel to the Netherlands, leaving much of their possessions, including their family pictures, behind.

The fact that these photographs are now digitized with the help of new media technologies is not surprising. After all, the past few years has seen an increase in archives using new  techniques to scan cultural heritage. The Tropenmuseum is certainly not one to fall behind with its entire collection also available online. In addition, databases that are composed of digitized cultural products are increasingly more searchable and accessible by a larger public, as archival scholar Kate Theimer has pointed out in her research on so called archives 2.0. ((Theimer, Kate. “Conclusion: Archivists and Audiences – New Connections and Changing Roles in Archives 2.0.” A Different Kind of Web: New Connections Between Archives and Our Users. Kate Theimer, red. Chicago: Society of American Archivists, 2011. 334-356.))

However, what is interesting in the platform that the Tropenmuseum created, is the specific content that is generated and the agents that help bring this content to the fore. What makes Foto zoekt familie stand out as a digital heritage project, is its focus on a history that is not that pleasant, by a generation that did not witness these events themselves.

If you look at the way Foto zoekt familie is promoted on the bags of Indonesian chips that I have described above, the tone of voice in which consumers are addressed stands out. “Is this your grandmother?” the picture asks, assuming that at least part of the consumers of those Emping chips are from a younger generation. A younger generation of Indonesian or mixed descent, furthermore, as the term “grandmother” hints at, a possible blood relation between the consumer and the girls depicted. As the title of the project accentuates, these photographs are in search of a family, rather than an owner. As a result, Foto zoekt familie does not necessarily speak to the people that actually left the family albums behind in the former colony, but does imply a close personal connection between the visitors of the project’s website and the Dutch East Indies.

This generational gap may be explained by the problematic status that the legacy of the Dutch East Indies has had in the Netherlands for such a long time. Foto zoekt familie focuses on a painful part of Dutch history, one that did not receive much attention until recently. On the website, the people behind the project explain that

“In the event the families we are looking for are located, we will ask them for the stories behind those picture and will document these on our website. This way the colonial history can live on through personal stories.” ((My translation. “Worden de betrokken families teruggevonden? Dan vragen we naar de verhalen achter de foto’s en zullen we die op deze website  documenteren. De koloniale geschiedenis blijft zo doorleven in persoonlijke verhalen.”))

This gives way for seeing Foto zoekt familie as a new platform that provides research material for a period in time that the Dutch government is not that eager to investigate, but that is still in the hearts and minds of many people, affecting even those family members that did not experience the events of the 1940’s first hand.

It will be interesting to see if digital heritage projects like this give way for an alternative memorial culture in the Netherlands, that maybe in the future will convergence with other existing frameworks of remembering our colonial history.