Do you “LensIt”? A call for research on modified selfies


Flower crowns, dog’s ears-nose-tongue, poking rainbows, big sparkling eyes…. Oh Snapchat what have you done? It has almost been a year since the Snapchat filtered selfies have occupied the Internet (TechCrunch). Did we move from “selfie mania” era to the Snapchat-filtered-selfie-mania era? Users seem to love them. Even without makeup, even with dog ears, most of the lenses do make you look prettier; they somehow beautify you. It’s you but it’s not you. And that’s really interesting, isn’t it? 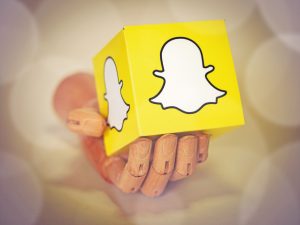 So, our team, Charlotte, Christina, Joanne, Lina, decided to look into the academic literature and check what scholars and researchers say about this relatively new “mania”. There, things are too hazy. Of course, Snapchat is present in the (online) press as it was blamed for promoting racial stereotypes  like in this article on Mashable, but also in a post from the Digital Trends. It was also accused of promoting specific beauty standards because of the lenses that whitened skin tones, as Buzzfeed reported. However, surprisingly enough,  this new trend of Snapchat filters and all kinds of similar lenses have not yet gained a worth-to-study status in academic scene from new media studies perspective.

Nevertheless, we aim to make the start and trigger research on this “phenomenon”.

But first, what is already discussed in academia ?

“Social media is about communication with others, but we should be equally aware of how we use social media to reflect upon ourselves” (Rettberg 12). We are interested in trying to understand the role of modifying lenses technology on users’ self-representation in social media.

The “selfie mania” has often been criticised as the new narcist practice of today’s young people (Twenge & Campbell; Lee in Marwick 141). However, although taking selfies is considered a 21st century phenomenon, the act of self-representation is not new at all. See the 15th century self-portraits, autobiographies, or even diaries; humans have always sought for ways to present themselves. Rettberg argues that practices of visual self-representation have always been part of our culture. What is new is the use of digital technologies e.g. the selfie camera or the creation of online profiles that facilitate those practices (2).

What the front-camera digital technology also enables us, is to see our face while taking the shot and delete it if we do not like it. Therefore, digital technologies gives the users greater control over the way they represent themselves than older photograph technologies (Rettberg 12). Additionally, as a painter could ‘modify’ his appearance with a convex mirror in order to paint a portrait of his own “modified self” (Rettberg 2), nowadays filters and lenses are used to “distort” our face or body in the photographs we share on social media (Dussault; Rettberg 2).

It is important though to point out that self-representation never mirrors reality; it is always constructed. Even in the initial act of taking a picture, as Papacharissi writes based on various researchers (Barthes, 1982; Jacobs, 1981; Slater, 1995), “we therefore consciously and unconsciously transform ourselves before the camera, portraying a version of ourselves we hope to be” (255). Furthermore, according to Goffman who connects theatrical performances with social interactions, even in daily interactions, individuals do tend to give a kind of “performance”, unconsciously or not.

Regarding online visual self-representation, photo filters have now gained an important part in visual culture. According to Rettberg, the use of filters gives the image “that strangeness that defamiliarizes our lives. The filtered image shows us ourselves, or our surroundings, with a machine’s vision” (26). Even if filtered selfies became cliches, Rettberg writes that “for each individual me, seeing ourselves through a filter allows us to see ourselves anew” (26).

“every female: THIS SNAPCHAT FILTER IS ME NOW!”, source: YouTube

Finally, the built-in filters or lenses (e.g. as in Snapchat or as in the cameras of the latest smartphone) create the following phenomenon: “using filters on the app is comparable to looking in a mirror: move the phone around and at every angle you’re still in filter character. It’s you, but it’s not you” (Cherrington in Huffpost Style).  In other words, they do make you aware of your transformation.

An interesting project, Selfiecity, analyses and investigates the styles of selfies (based e.g. on the pose or mood of the person) in five different cities (i.e. Bangkok, New York, Berlin, Moscow, Sao Paulo). Their findings suggest that “people take less selfies than often assumed”, it is  “significantly more women” and “a young’s people sport”, and that Bangkok and Sao Paulo are “all smiles” and especially in Sao Paulo “women strike more extreme poses”.

However, no research regarding modifying lenses has been conducted so far and that is exactly the reason of the creation of our project, LensIt. 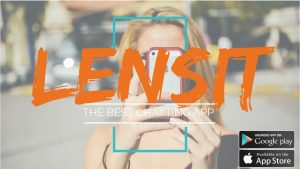 We came up with the concept of a mobile phone application, which we named “LensIt”, that provides users the tools to create their own lenses through modifying their facial features as much as they want. Through this application, we collect user’s ethno demographic information, how often and how much they modify their facial features i.e. the parameters the user changed to ‘reshape’ it. It applies the latest facial recognition technologies and lens functions that would allow users to freely modify their facial features, skin tones, other appearances and save the results. The collection of the data is possible with the consent of the users as it is included on the terms and conditions that users need to accept before using the application. Then, the collected data are made available for the users by loging in on the website that we created to demonstrate results.

By giving access to statistics of the users’ profile an their use of the lenses, we thus provide a platform for the public to discuss and share their thoughts about the use of modifying lenses and filters. Additionally, the website enables us, other researchers, and scholars to conduct further research and/or visualize and analyze the dataset from different angles of academic debates.

Wait, how did we get to it?

During the first brainstorm session, we have realized that there is a huge interest in the currently trending of lenses provided by the Snapchat application, which was launched on September 2015. Considering the importance of the self-awareness around the use of such lenses, we raised several questions such as: are the users using lenses/distorting their faces for entertainment? for aesthetic reasons? to hide imperfections? for boosting their self-confidence? for self-branding? This relates to Marwick’s study of the Instagram filters.

When searching for more academic works related to the modifying lenses, we realized that there was an important lack of scientific research around the topic. So, we first drew on authors that had been studying Snapchat as well as those who studied the awareness of the self on social media and through new media technology (e.g. Wargo, Morozov and Dussault).

Nevertheless, the feedback on our research proposal suggested us new ways to engage with existing academic debates and thus we decided to focus on the concept of self-representation. Consequently, we drew on other researchers, like Manovich, Rettberg and Marwick. At the same time, we have conducted a desk research on the Internet. On one hand, we collected newspaper or blog articles related to modified lenses and on the other hand, we looked at similar studies, such as Manovich’s “Selfiecity” to look at the possibilities and ways for further investigations on the built-in lenses and filters for selfie-cameras.

To carry out our research goals, we thought that it is important to observe user behavior via this application. By collecting the data of the user’s modification activities (how much and in what way do they tend to modify their faces) we can achieve the below:

Moreover, our project “LensIt”, taking the role of data collection, is the tool to our objectives. We thus created the website to better raise awareness of the use of new media tools and circulate discussions for this purpose. On the website, we explain the purpose of launching this application and evoke discussions about online self-image representation.

Some Self – Reflection on our Project

We may not be able to answer the debate of whether this new technology of facial filters is just a tool to help with our desire of self-representation, whether it has created our extension of self and a way of life, or shaped our notion of self. Nevertheless, we might reveal interesting patterns and correlations regarding the use of modifying lenses, address new questions and trigger further research, and provide new perspectives to the new media technologies.

As it was the case for Manovich’s Selfiecity project, LensIt can also be provide data for cultural studies or other disciplines. Since any Media object is interdisciplinary, research can be conducted and data can be analysed with the focus on aesthetics (Manovich). For example, one could ask: will people always use the same lenses or more diversity? Will they make themselves more “beautiful” or uglier? Will specific beauty standards be detected?

However, it is important to point out our concerns on the ethics of collecting data online. As noted by Rodham & Gavin, there are “two ethical issues encountered when conducting online research: (1) gaining consent of participants and (2) confidentiality and anonymity of online participants” (93). Although users accept the terms and conditions before using the LensIt app, we are aware of the tendency of people not having reading them. According to Brem, “if you set up a site for collecting data, regardless of how much privacy and anonymity you promise, you are ethically bound to inform all potential participants that their contribution will be used as data in research” (2). So modifications on the website should be considered in order to make our purposes clearer and get participants’ consent. For example, pop-up notification may increase users’ awareness of contributing into online research.

Also, the analysis of online discussions through the forum and social media raises more issues as well. As Brem points out “the structure of an online exchange can be difficult to reconstruct, and its boundaries can be difficult to locate” (4). Because of the ambiguous and inconsistent nature of online conversations, the process of analysing the comments and users’ discussions is a hard and complicated. Moreover, using the forum discussions for research purposes, the issue of confidentiality is being raised once again. Therefore, it would be ideal to publish specific terms that researchers would need to accept before using our dataset in order to ensure confidentiality and preserve user’s anonymity. Nevertheless, further scrutiny on Human Research Protections should be made before the actualisation of the project is possible.

LensIt is created to enable users to think critically about modifying lenses or filters, and for researchers to step forward in this subject. By providing data of the app for users, we aim to raise awareness about how much self-representation is constructed online. We hope that this will lead to a wider understanding of today’s world about editing and sharing auto-portraits (selfies) online.

Goffman, Erving. The Presentation of Self in Everyday Life. New York: Anchor Books, 1959.

Morozov, E. (2013). To Save Everything, Click Here: The Folly of Technological Solutionism. New York: Public Affairs.

Walker Rettberg, Jill. Seeing Ourselves Through Technology: How We Use Selfies, Blogs and Wearable Devices to See and Shape Ourselves. Hampshire: Palgrave Macmillan, 2014.