Are you done receiving certain posts from friends on your News Feed page on Facebook, like their vacation photos while you are sitting inside watching the pouring rain outside? Are you fed up with the Facebook Page that shares videos with spoilers of your favorite TV show? Maybe you also want to mute the health posts from a Facebook friend, while you are lying on the couch eating chocolate? Would you rather avoid having to look at those posts for a certain amount of time and only look at things you consider useful on your News Feed? Facebook has a solution for this.

The social network site is working on a new feature, the Snooze feature. Josh Constine posted this news item on TechCrunch a few days ago: “Now Facebook has a Snooze button that lets you temporarily unfollow friends, Pages of Groups for 24 hours, 7 days or 30 days” (Constine). Facebook users can avoid certain posts for a day, a week of a month, without having to unfriend or block the friend, Page or Group on Facebook. TechCrunch also states that: “So now when you’re annoyed with someone or something, you can solve the problem without severing the connection” (Constine).

The Snooze feature on Facebook is not yet available to everyone because it is being tested by a number of users. Mark Molloy states this news in the Telegraph: “Not all users currently have access to the Snooze button, as Facebook is still testing it among a small selection of users” (Molloy). The feature that is tested on Facebook is forthcoming and has been spotted no more than a week ago by Media by Dre, a branding coach on Twitter. The new feature that temporarily mutes your friends can be found on Facebook like this: “To access snooze, click on the three horizontal dots to the right of the name of whatever friend / page / group you’ve had enough of. It’s being paired together with the unfollow option” (Welch). 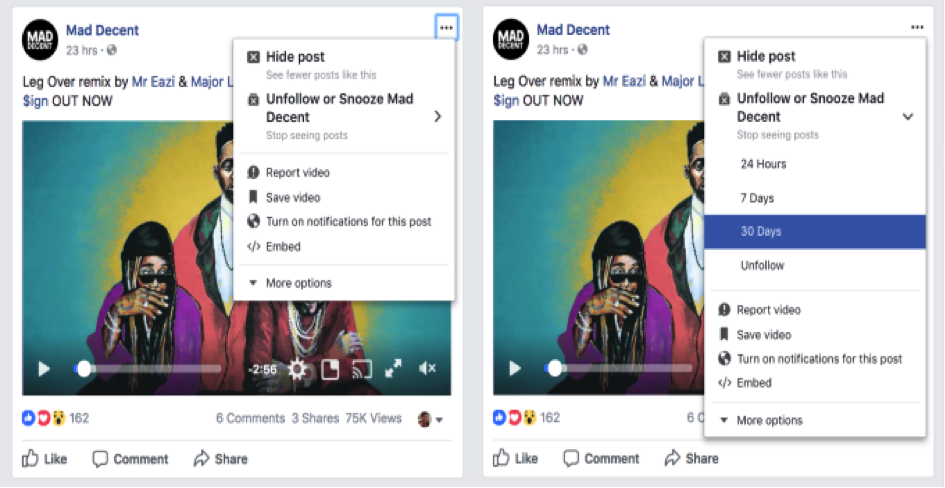 As pictured above, you will see where you can find this feature. Besides the options to Report, Save, Hide and Unfollow the post, you can also choose the Snooze option. By clicking on those three horizontal dots you can find these features on your Facebook Page. The Snooze option looks like the Unfollow feature, however, the Snooze feature differs because it is temporary and the friend, Page or Group you are snoozing will be made visible again when the snooze period is over. Emma Flanagan also explains this feature in the Bristol Post: “Facebook is introducing a new feature which allows you to mute a friend on your newsfeed. While this has been possible for ages with the ‘Unfollow’ button, the new snooze feature lets you silence your friends, groups or pages, for a certain amount of time” (Flanagan). So, the Snooze button temporarily mutes within a definite time scale whereas the Unfollow button mutes within an indefinite time scale.

There have long been lots of concerns and discussions about the way Facebook collects data from its users and uses this information for commercial purposes. Especially important in this respect is the use of algorithms on Facebook. A lot of arguments have risen on the use of these algorithms, for example on the use of the Like button, and how it affects its users. Taina Bucher has written an article about the power of algorithms and says “while many individual users may not be aware of the algorithmic politics behind the News Feed, this has become one of the main concerns for businesses and organizations that want to reach their desired audience” (1171). What Bucher states here, has long been a concern for Facebook. Businesses and organizations can easily reach their audience through algorithms without the user paying full attention to the politics behind it. Matt Carmichael also stresses this: “It’s logical, then, that marketers are using Facebook to reach both broad and extremely targeted audiences” (Carmichael n.pag.). The designers, producers and marketers behind Facebook are in control of how we see and use our News Feed page.

This makes me wonder why Facebook is developing the Snooze button in the first place. What are the algorithmic politics behind this new feature? What does Facebook get out of it?

The new Snooze function makes it easy to silence annoying friends, Pages, and Groups on Facebook. “The Snooze button could deter people from permanently unfollowing, unliking or unfriending things on Facebook while still giving them control over what they see” (Constine). Facebook wants to give the user more control over the data they get on their News Feed with this new feature, but is that all that Facebook wants? The Snooze button enables us to avoid annoying posts and mindless scrolling which is an advantage for the user. However, this feature also ensures that we log in on Facebook a lot more, which will provide Facebook with more user data so Facebook can send more user targeted advertisements, which will be financially beneficial to the company. Moreover, Facebook will be able to note which friend, Page or Group the user snoozes, and this information can be added to its huge data storage center, which has been a main activity of Facebook:

But they also provide a function extremely necessary to any Web 2.0 business plan: rationalized storage of vast amounts of data. In other words, while Stahl constructs her profile, Zuckerberg’s servers are busily storing her data. Here, we confront a contradiction: the smooth interfaces that users enjoy appear to be comprised solely of immediate connections and instant information, but the servers powering them are maintained in large part due to their long-term, archival potential. This contradiction is the motor that drives Web 2.0. (Gehl 1229)

The newly developed Snooze button can be regarded as a way of helping the user to decide what he wants on his interface but on the other hand it enables Facebook to collect all kinds of data on the user. By doing so, Facebook will be in charge. Even if you use the Snooze feature to silence a friend, Facebook still registers what you see and what you read. Hamilton, Bodle and Korin stress this by saying that “algorithms should not be considered merely “cameras” but “engines” that performatively enact the intentions of the programmers” (143). We should keep that in mind with this new feature, there is always somebody behind it who guides us in a certain way. The Snooze button provides Facebook with more confidential information about the user and we should keep the commercial purposes of Facebook in mind. Facebook will show us what they want us to read and see. Franklin Foer, who has written a book about the threat of big tech also confirms this: “The engineers are constantly making small adjustments, here and there, so that the machine performs to their satisfaction. With even the gentlest caress of the metaphorical dial, Facebook changes what its users see and read” (Foer 74). Small changes in our interface and algorithms lets Facebook take control of our data. With the Snooze button Facebook gets the opportunity to collect more confidential data about the user and, as said by Foer, Facebook is in control of the content we get to see on our News Feed.

These systems present a limited space of public governance (e.g. allowing Facebook users to promote particular causes through “liking” them), but their seemingly democratic interfaces are facades for the much deeper edifice of algorithmic arbitrage. Facebook, Google, Netflix and the rest do not often engage in over censorship, but rather algorithmically curate the content they wish us to see. (Finn 111)

It can be concluded that the Snooze button enables us to choose which friend, Page or Group we would like to avoid for a certain amount of time. However, as the above discussion shows, we should be cautious to think that we are in control of what we see on our News Feed page. With the introduction of the Snooze button we should keep in mind that Facebook uses this to store more data about its users and still lets us see what they want us to see on our News Feed page. Moreover, this enables Facebook to collect more confidential data of their users, which could be dangerous if used improperly or sold to third parties. The friends, Pages or Groups you want to snooze, are maybe also the ones you would rather lose.