Instagram influencers and YouTube vloggers have long been seen as the leaders in monetizing one’s online self. New to this scene are an entirely different cohort of digital money makers: those who profit as professional video gamers on live streaming platforms. Twitch.tv, or more commonly known as Twitch, is an online platform where gamers broadcast themselves playing video games via live stream, watch the live streams of others, and chat while watching the streams. [1] But Twitch is more than a live streaming platform; it is a highly intertwined social network that prides itself as a “community where millions of people and thousands of interests collide in a beautiful explosion of video games, pop culture and conversation.” [2]

Twitch is no small player in the online realm of live streaming. Founded in 2007 as Justin.tv, the company rebranded as Twitch.tv in 2014 and was purchased later that year by Amazon for close to 1 billion USD. [3] The platform has experienced a significant rise in popularity in recent years, and reports to have 15 million unique daily visitors who watch an average of 95 minutes of live streaming every day. [4]

Since 2012, average viewership of live streams on Twitch.tv has been steadily increasing, as has the average time spent by viewers watching live streams. [5]

The Twitch User Interface and User Base

Visitors to the Twitch homepage are greeted with autoplaying videos of active live streams. These streams have two simultaneously playing videos: one of the streamer’s face as he or she plays, and a second, larger video of the game interface. The streamers commentate as they play, either with others who are co-playing, or with viewers of the stream who can communicate directly with the streamer(s) via chat.

Twitch caters to a very specific demographic of users who sustain the thousands of live streaming communities active at any given time. In fact, 81.5 percent of Twitch users are male and 55 percent of those males are between 18 and 34 years old. [6] 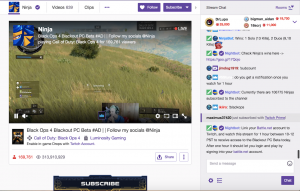 A screen capture of a live stream by Ninja, the most popular Twitch streamer. [7]

Twitch, as both a platform and social network, is unique because of the deeply entrenched communities that are mediated through live streaming. This built-in emphasis on community differentiates Twitch from its competitors and has led to the platform’s dominance in the live streaming industry. With as many as 800,000 concurrent Twitch users watching live streams at any given time, it’s clear that rivals such as YouTube Gaming, Microsoft’s Mixer, or Fb.gg from Facebook are struggling to attract the same type of engagement. [8] 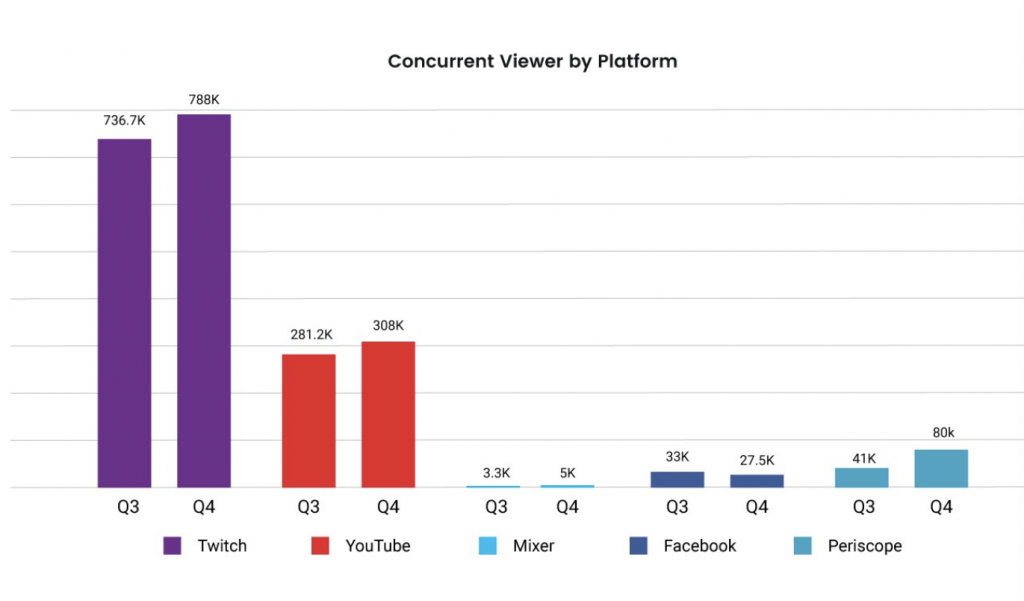 Twitch communities are most visible in a stream’s chat box, where participation is highly encouraged and moderated to foster enjoyable sociable experiences for viewers. [10] Stream communities, as Hamilton et. al suggest, create an online “third place” where participants share experiences, a sense of membership, and loyalty to their favorite streamers. [11] In this sense, the affordances of Twitch as a new media object allow viewers to engage directly with their video gaming idols in a more intense manner compared to other platforms. [12]

Facilitating the Rise of eSports

Twitch also differs from existing new media objects in that the online play of popular streamers enables them to gain notoriety outside of Twitch as eSports athletes. eSports (as in Electronic Sports) athletes take gaming to a new level by competing in front of an arena audience, while millions of at-home viewers simultaneously watch the tournament online via live stream. [13] These tournaments are often organized around one popular game, such as the League of Legends World Championship or The International Dota 2 Championship tournaments. [14] This makes categorization of Twitch streaming difficult, as Adam Putz and Anthony Mirhaydari point out: Twitch “operates just like a live video feed or Netflix stream,” but also enables viewers who watch eSports tournaments on Twitch to feel like they are spectators at a live athletic event. [15] These spectators hold immense power, too. By 2020, 300 million people will watch eSports tournaments online. [16] With the rise of eSports fandom, the line between active and passive media consumption by viewers is increasingly blurred. [17]

Social Value of Twitch Communities vs. Economic Incentives for Streamers and Amazon

Twitch’s social value to viewers and streamers alike is evident in both the tight-knit communities that exist on Twitch and the increasing demand for eSports content. But is this social value truly authentic when so much is at stake financially for both Twitch streamers and Amazon, Twitch’s parent company? Twitch’s design affords streamers the ability to profit in a variety of ways. The “lifeblood” for most professional streamers’ incomes are tiered subscriptions of 4.99 USD, 9.99 USD or 24.99 USD per month, which are offered through the Twitch Affiliate program. [18] Subscribing provides viewers a way to financially support their favorite gamers and gain recognition as loyal community members, while also unlocking exclusive benefits such as special emotes to use in the chat stream and in-video ad-free viewing. [19] In turn, streamers are financially incentivized to stream their every waking moment, generate compelling content and grow their community of viewers. [20]

While the Twitch Affiliate Program model may look like a harmless peer-to-peer exchange, Twitch (and thereby Amazon) is the ultimate winner: they take a 50 percent cut of each monthly subscription fee. [21] Underlying the trendy and idealistic rhetoric of the community participation and collaboration that Twitch enables is a hell-bent drive for profits. [22] While the creators of user-generated content on live streaming platforms may view their channels as social spaces, the “owners of the system” – Amazon, in Twitch’s case – can exploit this content for profit with minimal effort and prosper off the digital labor of streamers. [23] In other words, the affordances of live streaming platforms like Twitch create tension between the social benefit of building participatory communities and the capitalistic drive for money and power by companies like Amazon. [24] How will Twitch viewers be able to reconcile this reality? Quite frankly, it appears they couldn’t care less: the company recently reported viewership has increased by 21 percent in the first quarter of 2018 alone. [25]

[15]Putz, Andrew, and Anthony Mirhaydari. “Amazon, Twitch and the Rise of Game Streaming.” PitchBook, 10 May 2018, www.pitchbook.com/news/articles/amazon-twitch-and-the-rise-of-game-streaming.